Share All sharing options for: The Road To Raleigh: Chaput Plays Villain 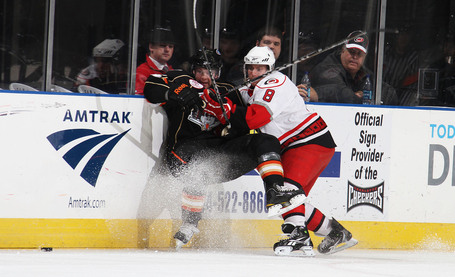 The Checkers had only one game on their schedule this week. Their Sunday matchup against the Anaheim Duck's affiliate- the Syracuse Crunch went sour on Sunday afternoon in Time Warner Cable Arena. A close fought game made a hero out of a former Checkers player.

Stefan Chaput was in town for the Crunch after being dealt to Anaheim along with Matt Kennedy in the deal that brought new fourth line forward Ryan Carter over to our beloved Hurricanes. Chaput did his best impersonation of LeBron James as he sunk the Checkers smooth sailing ship on Sunday with a grind-it-out style goal late in the third. More on the Sunday's game after the jump.

As previously stated, the Checkers played in only one game this week. The Sunday affair with Syracuse was a close game through all three periods, but Charlotte fell short. The Checkers were coming off of a red hot road trip that saw them steal all six available points from high quality teams like Hershey and Norfolk. Their three game mini win streak was on the line, and Stefan Chaput had other ideas about four straight.

Matt Kennedy and Stefan Chaput returning was an interesting storyline. Many CC readers were wondering if Kennedy would be up to his usual tricks. Would he scrap with a former teammate? No, but Chaput netted his first goal of the year late in the third. Off of a rebound, Checker goalie Justin Pogge scrambled to cover a loose puck that kept getting golfed into the air by Crunch forwards who camped out down low. Chaput out muscled Zack Fitzgerald who had a tough time clearing the crease, and knocked the loose puck into the net to break a 2-2 tie with just over two minutes left in the third.

Wilkes Barre/Scranton continues to dominate the American Hockey Leage. 20-4-0, are we being serious here folks? The junior Pens are looking like the Hershey Bears did en-route to a Calder Cup Championship last year. As seen by the goals for column, Norfolk has lit up opponents all year offensively. Blitzing goalies has been their specialty. Hats off to Admiral forward Johan Harju for winning Player of the Week honors from the AHL. Three of the top four scorers in the AHL reside in the East Division (Andrew Gordon/ Hershey, Dustin Jeffrey/Wilkes Barre, Corey Locke/Binghamton). The Checkers finally let the other East teams catch up in games played, and have thus dropped to a tie with Hershey for third. 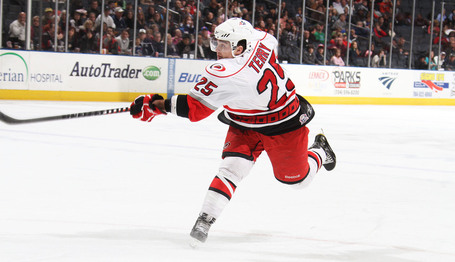 (Chris Terry takes a nice slapper from the slot for his powerplay tally, via Gregg Forwerck) 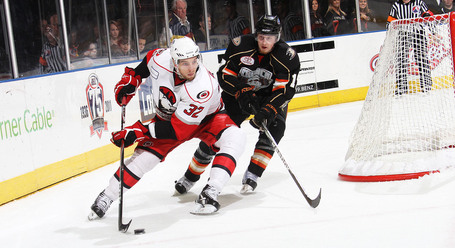 (Oskar Osala threw his big body around on Sunday. He picked up an assist after tallying a game winning goal against his former team in Hershey on the road trip last week, via Gregg Forwerck)

It's somewhat unfair to have a hot/not section after one game. It should be noted however from this game that Bryan Rodney had a rough night after being an offensive force on the road trip. Rodney posted a -2 rating and mustered one shot. Zack Fitzgerald was even on the plus minus, but had trouble clearing the crease on the eventual game winning goal by Chaput. Only one player was a positive, winger Drayson Bowman with a +1 rating. Brett Sutter lead all Checkers with five shots, followed by Borer, Carson, Samson, and Dalpe who all registered four. Starting goaltender Justin Pogge allowed three goals on 21 shots. Syracuse goaltender Timo Pielmeier fought off 34 of Charlotte's 36 shots en-route to the win. Samson and Terry scored Charlotte's goals, Terry's was a powerplay goal. MicFlikier, Bowman, and Osala all tallied assits. MicFlikier had a rough day staying disciplined- he picked up six penalty minutes. With a slash, a trip, and a hook, he notched an unhappy hat trick. 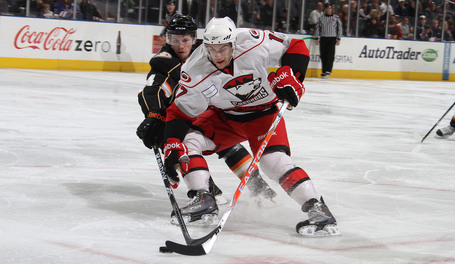 (Jerome Samson steals Erik Cole's tricks as he charges into the zone on Sunday, via Gregg Forwerck)

Anything that one would say about Samson would likely be an understatement. Samson notched his team high 13th goal of the year to tie things up on Sunday when he whipped a pretty shot by Pielmeier in the 2nd period. Samson is capable of playing at the NHL level, I would stand by that. The question is, would the Hurricanes place him in a position to translate his goal scoring touch? If so, would Samson be able to keep up his torrid scoring pace with the big boys? Are Bowman and Boychuk more important to Samson's success than many think? Perhaps so. My thoughts are that Boychuk, Bowman, and Samson should be a package deal. If the future dictates that veteran Cane forwards must move on, a move to bring the two B's and Samson may very well provide Carolina with needed offensive punch. Outside of Skinner and Staal, the Hurricanes could use more scorers. Samson has proven to be that with his buddies Boychuk and Bowman. Bowman notched an assist on Samson's goal and as noted before, was the only Checker to be a plus player. 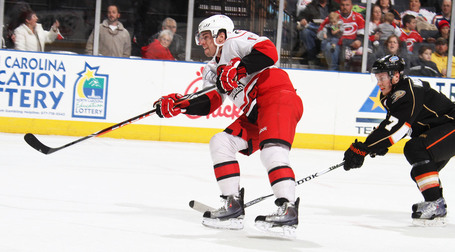 (Jerome Samson scores his goal after being set up in the slot by Bowman, via Gregg Forwerck)

Zack Fitzgerald returned from injury which forced Charlotte to reassign young Kyle Lawson to Florida of the ECHL. Bobby Sanguinetti is still banged. Drayson Bowman was stung after taking a Rodney slapshot to the torso but was no worse for wear. Matsumoto had nice jump. The home fans got their first look at him in a long while. He jumped in to force a short handed breakaway but was stopped by Pielmeier.

The Checkers will stay put in Charlotte this week for three games before embarking on a five game road trip to end December. A rematch with Syracuse is scheduled for Monday, and the familiar Hershey Bears come calling again for a pair of duels to end the week. "Teddy Bear Toss" will occur during Friday's game against Hershey, and is also "As Seen On T.V Night". A big turnout is expected for what is always a good matchup between the Checkers and Bears. Fans will toss Teddy Bears onto the ice after the Checkers first goal, and all Bears will go to charity for underprivileged children this Christmas. The first 2,000 fans into Friday's game will receive an "As Seen on T.V." product by TeleBrand. Friday should be chock full of fun for fans and Charlotte.

The Walker cup was actually the hardware that used to be awarded to the Eastern Hockey League champion. The Kelly Cup as most of you readers selected, is given to the winner of the East COAST Hockey League. Many fell victim to my sly question wording last week, but 17 percent of you answered "Walker Cup." The Kelly Cup was won by Charlotte back in the team's ECHL days. For this week, we will feature a Kelly Cup related question.