Clicks and Clippings: The Bipolar edition

Share All sharing options for: Clicks and Clippings: The Bipolar edition

It's no secret these two fan-favorite Hurricanes pictured to the left are among the most highly sought-after in the NHL trade market these days. None of us knows how many more games either player will have this year with us at the RBC. For me, spotting this image of Matt Cullen and Ray Whitney, two key veterans of that remarkable 2006 Stanley Cup winning roster, celebrating last night in  Hurricanes' jerseys, brought out the increasingly familiar feeling of joy for the achievement in the moment, clouded by the knowledge that we're coming to the end of the Caniac era that established hockey as a unqualified success in North Carolina. Nothing is ever simple. As the team's owner Peter Karmanos Jr aptly described the mindset yesterday, among the Hurricanes faithful, we're all feeling bi-polar.

Following are re-caps and quotes from the Canes convincing victory last night, which makes us all happy, with now three wins in a row (and 7 in the last 9), which puts them solidly up to 28th place in the standings, sadly decreasing the odds of earning the #1 pick with every win, but keeping alive the hope of actually making the playoffs as the  Eastern Conference teams' mediocre performances have earned what Scott Burnside called Junk Status. That's good for us, isn't it?

TSN.ca:  Pitkanen scores go-ahead goal as 'Canes stop Panthers "There's still a chance (of making the playoffs), so we're battling every time we get on the ice," Carolina defenceman Tim Gleason said. "We're having fun. We have no pressure here, and we're just playing as hard as we can."  For those of you keeping track, the tragic number stands at 4.

After the jump, we look forward to the two remaining games before the Olympic Break, keeping in mind that the Olympic Trade Freeze begins at 3pm this Friday, some links around the professional hockey world and even a few stories to get you in the right frame of mind for the hockey-fest in Vancouver which begins next Tuesday.

Canes keep wins coming : NewsObserver.com The Canes have two more home games before the Olympic break, against the Buffalo Sabres on Thursday and the New Jersey Devils on Saturday. They wish they had 10. "There's more confidence in the room than there has been all year," Maurice said. "You'd like to keep playing."

Here's Gleason, "recently named to the US Olympic Team" working over Gregory Campbell last night. Let's hope he studies up on the rules for fighting in Olympic competition before he takes the ice in Vancouver next week.

Steven Goertzen's scrap with Bryan Allen is linked here. I like those atta-boy glove-taps he gets from Gleason and Joe Corvo as he heads off the ice.

Finnish hat trick helps ‘Canes to 4-1 win over Panthers - Indy Week Blogs Gleason received 12 stitches and was back before the end of the second. "Meat and potatoes" indeed, Maurice.

Rex Ryan’s Rather Unfortunate In-Game Wardrobe Change [Update] | The Big Lead For some reason, Jets coach Rex Ryan showed up at the Hurricanes/Panthers game in Raleigh last night wearing a Flyers jersey. The Storm Squad had a remedy for that. There's even audio of him discussing with Joe Ovies how he is a big fan of  hockey. Basketball, not so much.

Positives Easy to Find - Tracking the Storm  Following practice today, Coach Paul Maurice also mentioned the much-improved special teams play. Over the last 11 contests, the Canes have converted at a 22 percent rate on the power play, which would contend for the league lead if maintained for the season. Even more impressively, the team has allowed just three power play goals over that stretch, posting a stellar 93 percent clip on the penalty kill.

Canes Now | Peters excited about facing Devils, Martin Brodeur  I've been a part of games there and the atmosphere," Justin Peters said. "To get out on the ice and play in front of those fans will definitely be something I'm looking forward to and will be exciting." For that game, you can also participate in the Valentine's Day Mystery Cane T-shirt fundraiser, detailed in this release.

And this about Thursday's opponent: Northeast: Slumping Sabres have lost the edge -  Following a shootout loss to the Bruins on Tuesday, the Buffalo Sabres are 2-7-2 in their last 11 games. Another piece discusses the calls to bench their Captain: Sully on Sports: Bench Captain Rivet? (Ouch. Maybe Lindy Ruff can get a moment with Paul Maurice Thursday  to hear from a coach who's been there, done that). Thursday is also the night where heads get shaved as part of the Annual St Baldrick's event.

Hurricanes to honor Capital City Crew  - Hockey is for Everyone NHL.com did a feature piece on this great community program that hopefully will serve as an example for other teams around the league.

Announcing the Charlotte Checkers: For coverage of today's announcement of the Hurricane's AHL affiliated team moving to Charlotte, check in here. The Checkers' site announcement is here. ESPN.com had this in-depth story covering the move.

Canes owner has goals in mind  - NewsObserver.com As dismal as this season has been for the Carolina Hurricanes, here's the way next season is shaping up: The Hurricanes will open the regular season with two games in Helsinki, Finland, and also will play a preseason exhibition game either in Finland or Moscow. 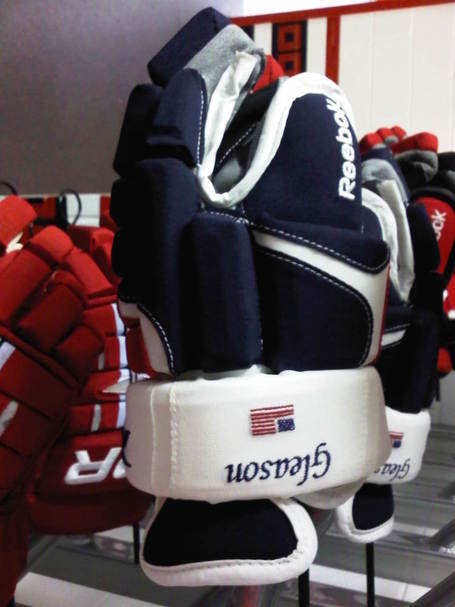 via the Canes twitter feed captioned: Tim Gleason has started breaking in his Team USA gloves for the Olympics

Olympic rule book differs from NHL rules - NHL.com - All-Access Vancouver NHLers involved in the Olympics will be playing under some different rules. Check out the major differences.

Brodeur ready to roam in Vancouver -  Martin Brodeur is ready, willing and able to play the puck when he competes for Canada at the 2010 Olympics.

Staal eager to get on Olympic ice for real In 2006, Eric Staal got to see the Olympics from Canada's taxi squad. In Vancouver, he will be in the thick of things.

2010 Winter Olympics |  NBC Olympics The Official site for the Olympics from the Official network officially covering the games. Speaking of TV scheduling, here's a tweet for you: Twitter / Allan Walsh:

How do you spell disgraceful? + this is NHL broadcast partner! The USA-Canada game is not on NBC sched in favor of Ice Dancing + Men's GS.

Olympic sights we don't want to see - NHL.com The Olympics presents an interesting dilemma for a hockey fan -- root for your country, or the players from your team. I think we can all relate to this problem. For now, we can relax, Team USA does not face Team Finland in the preliminary rounds.

Trade talk (and after that, thinking about the draft too)

After The First Round, NHL Draft Is A Crapshoot - From The Rink When it comes to the NHL draft, first-round picks are far and away the best bet. Expect the NHL's deadline sellers to expect nothing less. Cory Lavalette crunches numbers with some intriguing results.

The Fourth Period :: NHL Players with a no-trade or no-movement clause This is cool: and it's listed by franchise.

Following trades of Ilya Kovalchuk and Kari Lehtonen, a rival Southeast Division GM is criticized for poor decisions in this post from  The Hockey News: Rory Boylen: Asset management has been Thrashers' undoing From Day 1 in 1999, the Thrashers have faltered at the most important team-building techniques over and over, never really taking any strides towards year-in and year-out consistency.

For traded players, life can be an interesting chemistry experiment - USATODAY.com Being the new guy in the dressing room after a trade is only slightly less fun than chewing tinfoil. Read this insider's perspective while thinking about Niclas Wallin and the rest of the Canes who might be doing this soon.

Sharks GM gets his man (Wallin), but may not be done shopping - ESPN "There are a lot of mutual friends that speak really highly of Nic Wallin as a teammate and competitor," Wilson added. "Whether it be Arturs Irbe or Bret Hedican, for example. We know about him as a person and as a teammate, and he's always played his best hockey in the playoffs."

NHL Draft Blog - The Taylor Hall-Tyler Seguin debate will only get hotter - ESPN Teaser for the subscription article. But worth a look, nonetheless.

Top 10 hits of the week - including, at #1, Mark Giordano's double whammy on Joni Pitkanen and Eric Staal in Calgary a week ago:

For more on the rough ride for Eric Staal in that game in Calgary, Kevin Weekes has some words of respect for his former teammate in  this focused video from NHL On the Fly:

Another iron in the fire for the Canes, is the bid to host next year's All-Star Game here in Raleigh. Here's a story from bidding competitor Pittsburgh as the  Penguins submit bid for 2011 NHL All-Star game on what they bring to the table.

As we await news on Cam Ward's back, and watch the veteran Manny Legace alternate with the endearing Justin Peters, maybe you've wondered what was new with Michael Leighton? Leighton expected in goal tonight | Philadelphia Inquirer Backup goalie Michael Leighton rescued the Flyers' season by going 8-1-1, with a no-decision, during an 11-game stretch while Ray Emery was injured. Uncertain Future: Questions Surround Emery's Injury Read between the lines, it appears Laviolette is saying that if Leighton takes the puck and runs with it successfully down the stretch, he'll stand behind Leighton when the playoffs arrive.