The Buffalo Sabres, (32-18-8) are in town to do battle with the Carolina Hurricanes, (22-30-7) tonight at the RBC, but most of the chatter around the rink is not about the game, it's about the possible upcoming trade of Hurricanes center, Matt Cullen.

According to this article in the Triangle Business Journal, Jim Rutherford is expecting to trade Cullen before the Olympic trade deadline, which is tomorrow at 3 p.m.  That means that tonight's game could very well be Matt Cullen's swan song at the RBC, as a Hurricane anyway.

While the Carolina GM could certainly bring the versatile player back again next season, the likely scenario is that Brandon Sutter will assume role as second line center and Cullen would move on.

The toughest thing about these situations is that not only are the players in the dark during the negotiations, fans never have a chance to say goodbye and there is no closure.  Sometimes that makes seeing the players move on all the more difficult.

On Tuesday night, there were scouts present in the press area representing Toronto, Chicago, Pittsburgh, Detroit, Montreal, and Minnesota.  Could Cullen be going home to finish the season with the Wild?

More about this as the story unfolds.

The Hurricanes are presently on a roll and have won three games in a row and seven of their last nine.  Jussi Jokinen has been on fire since moving up to the Eric Staal line and has a seven game scoring streak on the line.

Manny Legace gets the nod in net tonight.  Paul Maurice said that Justin Peters will get his next opportunity to shine against the Devils on Saturday night.

The lines will be the same as in recent games:

The Buffalo Sabres have lost four games in a row, including a 4-3 loss at the hands of the Hurricanes last week Friday at the HSBC.  It seems like they could use a jump start before the trade deadline expires, but will they make a move?

Die By The Blade examines that very topic.

This game will be broadcast locally by FS Carolinas starting at 7.  We will have the open game thread warmed up and ready to rumble at 6:30.

Will Caniacs be watching another 2006 Stanley Cup hero move on after tonight? 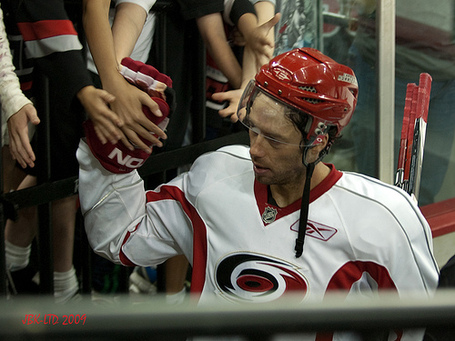