Mr. Rutherford: We're counting on you

Share All sharing options for: Mr. Rutherford: We're counting on you

Once the Ilya Kovalchuk trade was consummated last week, the focus of those NHL media mavericks, eagerly twittering messages of rumors and deals with the trade deadline approaching, turned to the office of Carolina Hurricanes' GM Jim Rutherford. The extreme parity in the middle of the Eastern Conference standings has created a short list of sellers and available "assets". For better or for worse, we've known for months that Jim Rutherford is open for business.

With the patience of a professional goaltender, Mr Rutherford is at last in an enviable position, maximizing the return he  can bring home on these deadline deals. The Hurricanes faithful should expect his negotiations to bring to our Hurricanes an impressive foundation that  will make the team serious contenders next season, and for years to come.

Have at it, Mr Rutherford; make it happen. It's painful enough for all of us (and we know you hate it too) to say good-bye to these familiar faces when we share so many remarkable memories. Still, in the CBA salary cap world exacerbated by this "hard times" economy, we unfortunately can't have it all. So, if this has to happen, we're counting on you to build another thrilling team for whom the Caniac Nation will be cheering for years to come.

Now, the Buyers may look at this differently

However, if you're a bubble team or one looking to go all the way, and you're desperate for the missing element on your roster, that consistent play-off veteran who will bring stability to your room as the post-season approaches, you may not take kindly to Mr Rutherford's powerplays for the Hurricanes' benefit. By all reports, numerous "buyers" have approached our savvy GM in recent weeks; John Forslund said in comments on NHLLive Tuesday that there were nine teams scouting at the RBC Center that night - including the Toronto Maple Leafs, Chicago Blackhawks, Pittsburgh Penguins, Detroit Red Wings, Montreal Canadiens, Minnesota Wild, and presumably that night's opponent, the Florida Panthers.

This article appeared in the Florida Sun-Sentinel a few days ago, describing the predicament the Florida Panthers General Manager, Randy Sexton finds himself in, and gives us a glimpse behind the scenes of the dynamics amongst all the NHL GMs this week. Here's a reminder of his comments, and it's safe to say we know one seller he has been talking to:

..With so much parity in the Eastern Conference, hardly any team has decided it will be a seller. As for teams talking possible deals with the Panthers, "there are a lot of [teams] out there with guns and masks." 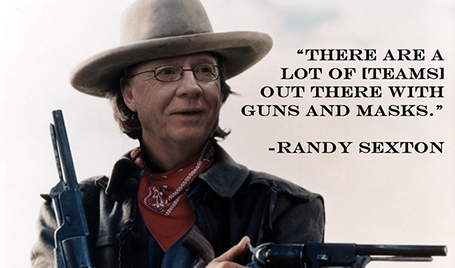 Here's my request as a dedicated member of the Caniac Nation: Hang tough, Jim Rutherford! Be smart, be patient and remember the longterm plan. This isn't your favorite part of the job, we know, but I believe you understand how to do it well. And for that, we Caniacs owe you our support and  tremendous gratitude.