While it came as no surprise to anyone here at the blog or over at 1400 Edwards Mill Road, your Carolina Hurricanes announced this morning that Matt Cullen was in fact and at last no longer a Hurricane. After months of conjecture on the wheres and whens, the veteran center was shipped to the Ottawa Senators before practice today. Following is a collection of links on the details and importantly, even the emotional after-effects that are part-and-parcel of the deal.

As Cullen headed up to Michigan to join the red-hot Senators who face-off against Detroit tomorrow night, I gathered these stories, audio and video links that all recognize the significance of this day here in Raleigh.

First off, this video of Jim Rutherford announcing the transaction reinforces that this was not a good day for anyone who loves the Hurricanes. "We have to say good-bye to a player we really really like....and it's a tough day."

The Hurricane's writer David Droschak repeats the sentiment with this just posted: A Tough Day at the RBC Center

The man of the hour, Matt Cullen, spoke to the folks on NHL Live! at noon. Listen here, beginning at the 5-minute mark. If you missed it earlier, take a moment to listen to his perspective. He was heading to Detroit where the Senators play the Red Wings Saturday night, then finishing the week at the Nassau Coliseum vs the Islanders Sunday.

UPDATE: This 48-second excerpt of Cullen's interview with Ottawa press went up at the Senators' SBN Blog Silver Sevens late this afternoon. Matt does a great job making me believe he is really thrilled to be a Senator.

And these observations from Canes' Captain, Eric Staal who expresses his regret that the season has gone this way. What will he miss most about Cully? "his giant beard during the playoffs, quick wit, always a smile, loves hockey..." 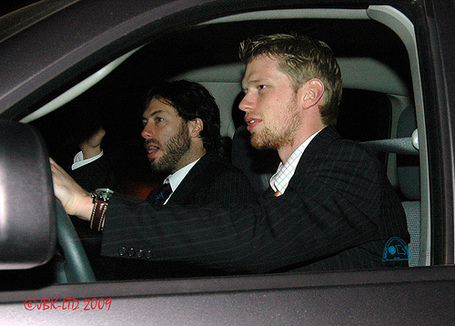 Learn more about the player who comes to us in return, plus some other deals and news around the league and looking forward to the Olympics as well, after the jump.

So just who is Alexandre Picard?

For starters, don't be confused to see there is a player on the Columbus Blue Jackets' roster with the identical name. Here's more to get you started:

Check out the audio comments this morning from our newest Hurricane, #45 Alexandre Picard.

WRAL.com posted this story on the trade as well as the video above.

Lyle Richardson, aka Spector, weighed in on the deal here.

CBC Sports had this Canadian perspective of the transaction, exploring why the Sens made sure they got their man.

TSN.ca Darren Dreger: All quiet on the trade front for the Hurricanes' Whitney suggesting the Kings may still be the Wizard's final destination. If Chicago wants him, I was thinking this dandy set of wheels might lure our muscle car loving winger to waive his NTC in exchange for the keys.

On Frozen Pond covered the news from Florida, who did nothing today, but warned fans that change is on the way. In fact, they state that there are no "Untouchables" on the Panthers' roster. This ought to be a fun couple weeks for the boys in Sunrise.

On the Minnesota Wild and Chicago Blackhawks deal that sent Cam Barker to St Paul, you can start here.

And the NY Rangers acquisition of Jody Shelley from the Sharks, Spector had this to say.

A couple follow ups to last night's win over Buffalo

Audio from John Forslund on 620 the Buzz this morning - Listening to him, I'm reminded there's nothing like winning, is there?

How about this? Brandon Sutter named 2nd star of the night over at Puck Daddy.

And listen to a searing post-game interview with the Buffalo Sabres' (and Team USA) goalie Ryan Miller. He got everyone's attention with this stinging indictment of his slumping team - you think he's angry after all those odd man rushes? Read more in the Buffalo News who provides the audio link in the body of the story.

ESPN.com Scott Burnside: 10 Things you need to know about Team Canada which includes a video of some good roundtable discussion looking at all the Olympic medal contenders given that each round is a one-game series.

Simple formula must be followed for Finn success - NHL.com Joni Pitkanen is considered a key. But they forgot about Ruu and even J-Ruu. (and I won't even go into our ongoing unanimous incredulity on the Jussi Jokinen snub, which looks like will not be remedied before these games begin. grrrrrrr )

The Yahoo! Sports blog for the Vancouver games, which features Oly hockey coverage from the fun-loving puckhead Greg Wyshynski, is called Fourth-Place Medal. Keep it open on your desktop the next couple weeks. Wysh also shared what he learned regarding NBC's decision to feature ice dancing over hockey, between the USA and Canada no less, next weekend. (and I think it's safe to say you can't blame all women, please!)

Olympian Tim Gleason also spoke with the folks on NHL Live!, and you can hear his comments at approximately the 1 hr45min mark of the link above.

For the guys here at the blog, who on occasion feel out-numbered (or at least uncomfortable) with the CC GF's and our "Featured player of the week" fanshot series, here's a collection of videos and images of "hot chick" Olympians from the magazine who invented the term: "Swimsuit Edition". Enjoy, boys! And be sure to thank me later.

Stories around the NHL

One of my favorite all-around NHL bloggers posts every Friday afternoon at NHL.com. Check out Phil Coffey's Ice Age for great stories, quotes and his unique insight.

In comments related to the Hurricanes bid to host the 2011 All Star Game, Carolina's Owner Peter Karmanos Jr mentioned ongoing delays with that new arena the Penguins will be using next season in Pittsburgh - it's scheduled to be ready to go in 6 months. Take a look at this walk-through video from Kukla's Korner and see for yourself. 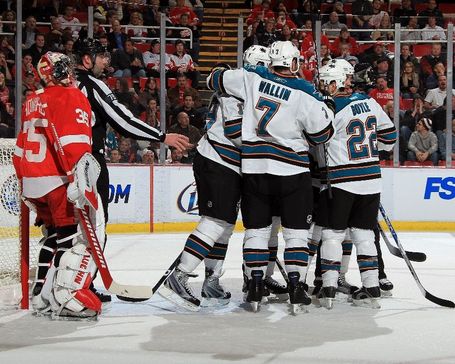 Traded less than a week ago, Niclas Wallin, notched his first point with the San Jose Sharks, getting the primary assist on a Joe Thornton goal last night. Even better, here's the video of the Big Swede's one-timer slapshot from the point that will be familiar (Thornton cleaned up the rebound for the score):