Clicks and Clippings: Vancouver Round 2

Share All sharing options for: Clicks and Clippings: Vancouver Round 2

Team USA faces off against the bottom seed of these Olympic games, #12 Team Norway today. Canada will be facing the Swiss at 7:30. Your guess is as good as anyone's as to what channels NBC will be showing these games on. The inconsistent predictably unpredictable coverage of  Men's Ice Hockey has led to a few blasts from familiar faces in the world of hockey bloggers:

KuklasKorner: Frustration Sets in : NBC, get your act together when it comes to broadcasting Olympic hockey. Or this: Hockey fans give NBC the broom over scheduling decisions - Puck Daddy The start of CNBC's coverage of this highly anticipated hockey game was a complete mess, instigated by a U.S. vs. Japan women's curling match that went into overtime or extra innings or sudden death brooming or whatever it's called.

If it doesn't work out, well then, here are the Rules and History of Curling

After the jump some stories on the US, Canadian and Finnish teams and some videos you don't want to miss.

NHL Olympic player tracker for Wednesday, Feb. 17 - NHL.com Cory found this great feature at NHL.com that provides daily updates on what every NHL player did at the Olympics, every game.

February 2010 Impact - A comprehensive look at the 2010 Winter Olympic Games A 28-page e-magazine with information, player features (including Joni Pitkanen and Dennis Seidenberg) , Olympic stats, and a little history.

Tweaks to playoff format add to confusion  Every year, the IIHF tweaks the format of the men's Olympic hockey tournament and every year, it becomes more complicated - to the point where even the principal players aren't exactly sure of how the tie-breakers work.

LATE ADD: Kukla's Korner posted this video (5 minutes after I published) of the LA Kings' 25-year old winger Dustin Brown in a  fascinating and insightful webcam conversation with a hometown LA reporter. Brown talks at length about his Team USA Olympic experience from the mundane (two twin beds?) to on-ice hockey strategy and  team leadership and dynamics, and his view of the Olympic spirit. Incredibly well-spoken for a kid who, Kukla observes, looks like a teen-age snowboarder.

Speaking of mundane details, I found at my house that we needed a players' roster with jersey numbers for the small screen. USA Hockey: 2010 US Men's Roster including jersey numbers (Print it out for while you're watching on TV till you get them down.)

Postcard from Vancouver from the Postbulletin.com: Rochester, MN Each USA player has been adopted by a wounded warrior from their home town, university or NHL city....A personal package was provided containing a letter of encouragement and various other items, even bullets taken from the soldier's bodies to be placed in the player's locker.

David Backes gives Team USA skill as well as snarl - NHL.com David Backes repaid his GM's faith in him by scoring the winning goal in Tuesday's 3-1 victory against Switzerland Tuesday.

USA an underdog in men's hockey? Here's how it can contend - USATODAY.com

Despite win Team USA must pass chemistry test - NHL.com With only a short practice and one game under its belt, Team USA must develop some cohesion among the forward lines to move on. 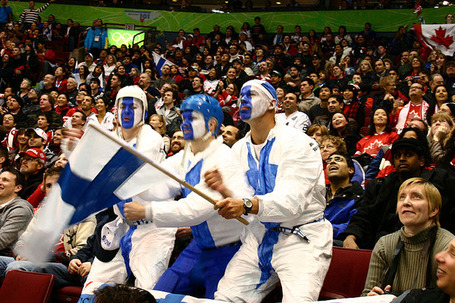 Team Finland's next game will be vs Germany at Midnight, Friday night.

Seems we weren't the only ones wondering about the sheep painted on Alex Ovechkin's skate blades: Fourth-Place Medal investigates mystery of Ovechkin's skates "The sheep is sort of a tribute to Ovechkin's last name. 'Ovechka' is translated as a 'sheep' into English."......... OK, but why does the sheep look so demonic? "I guess it's something like an angry or a determined sheep," said Chesnokov

There are a few obvious "bleeps" in this hysterical rap-themed Team Canada spoof (which TylerA7707 put on as a fanshot yesterday). Still - must see (slightly NSFW).

"when your roster look weaker than Patrick Kane's chest" ? rhyming "Oduya" with "the puck gets thru ya".....good stuff.

Canada looking to avenge loss to Swiss in Turin  Dany Heatley recalls the sting of losing to supposedly inferior Switzerland at the Winter Olympics four years ago and now he wants revenge. The Swiss in 2006 had one NHL skater, defenceman Mark Streit, and NHL goalie Martin Gerber, who made 49 saves for the shutout.

Oh and here's the Hockey Canada - CANADA MEN'S ROSTER with jersey numbers,  for your use and reference.

The Canes' own writer, David Droschak looks back with the River Rats and shares their recollections of that terrible night a year ago: David Droschak: Rats Bus Crash, One Year Later

Must read the interview with the new owner of the Hurricanes' AHL affiliate, re-locating to Charlotte as the Checkers, that Cory put up this morning. (Part 2 comes tomorrow) Canes Country Q&A: Interview With Charlotte Checkers Owner Michael Kahn, Part 1

Get right over and see this short video clip of USA Snowboarder Graham Watanabe talking about his experience in Vancouver.