Clicks and Clippings: Getting ready for Super Sunday

Share All sharing options for: Clicks and Clippings: Getting ready for Super Sunday

Get your weekend chores in order by 3 pm tomorrow, and then get comfortable and behold what has the potential to be the three best Olympic hockey games you could ask for, steeped in skill and national rivalry, to be played out for your wonder and enjoyment, back-to-back-to-back on Sunday. Here's the line-up:

3pm EST: Russia takes on the Czech Republic on NBC

The top 4 teams going into this hockey marathon? Team USA, the Czech Republic, Finland and Sweden stand at the top of the standings with 2 regulation wins, or 6 points each. Click on the countries above to refresh yourself on the host of talent each team brings to the rink.

The entire press corps of hockey media is drooling with anticipation of this triple-header. Here are just 2 pieces to get you in the mood:

Super Sunday: Hockey rivals square off with plenty at stake - Craig Custance On Sunday, three of the world's best rivalries will be played in a hockey tripleheader expected to be as intense as anything in these Olympic Games. Canada plays the United States, Russia plays the Czech Republic and Finland plays Sweden.

Ice Hockey: Golden rematches set for Super Sunday National Hockey League stars will be pitted against their arch rivals Sunday in Olympic rematches of the past three finals.

After the jump, more on these games, a little bit on Friday's late night beat-down of Finland over Germany, and even a few stories that don't take place in Vancouver.

What's at stake on Super Sunday?

What's at stake Sunday, other than entire nations' earning bragging rights built on decades of history between these rivals? Every team would like to finish in the top 4 in the standings, and earn a bye to the quarter-finals. Here's a great page to track the standings. Men's Ice Hockey : Standings and results from the Olympic Games official site. Bonus: If you click on the flags across the top you get to the roster stats for each team. Looking at this, you'll need to know the tiebreaking procedures:

The following criteria will be used in the order presented to determine this ranking following completion of the Preliminary Round (1D - 12D):

o Higher position in the group

And if you'd rather someone just figured it out for you, here's a fanpost for you: Your Olympic men's post-preliminary playoff scenarios! - Japers' Rink A Caps' fan stayed up till 4am last night to work through 64 scenarios to determine who gets a bye in the next round. Enjoy the fruits of his obsession here (or you could just wait till Monday).

Also, check in on these mainstream and new media sites covering Ice Hockey in Vancouver for the latest re-caps, features and analysis: 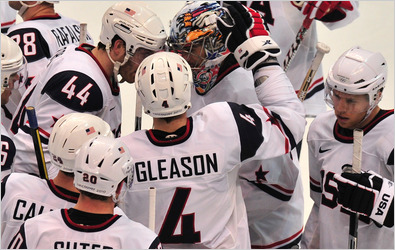 The New York Times prepares their readers for the game between the Canada and the USA with ‘A Great Day for Hockey’ As the U.S. Faces Canada in Vancouver - NYTimes.com (Mostly I liked their photo)

Shanny Says blog: Olympic thoughts - NHL.com Read Brendan Shanahan who is blogging from the games: While watching Team Canada squeak out a shootout victory against the Swiss, I couldn't help but wonder what coach Ron Wilson and General Manager Brian Burke were thinking.

Team USA's focus, excitement turn toward showdown against Canada - ESPN The United States' uneven win may be an indication of the Americans' anticipation of Sunday's showdown against host Canada.

'Brothers' USA, Canada face off Sunday with pool lead on line - USATODAY.com When Patrick Kane grew up in Buffalo, he remembers playing in Toronto where the debating was as heated as the competition.

Canada and U.S. are legit hockey rivals | Toronto Sun "There’s a lot of talent in the U.S. right now" said Team Canada executive director Steve Yzerman. "This is a legitimate rivarly and they’re a legitimate rival....The game is growing in the States and we can bad mouth the NHL that we’re in all these bad markets, but what’s happened in those markets is you’re starting to see hockey players developed. You’re starting to see players from Calfornia and St. Louis and other places where there were no players before." (As the mother of 2 boys who play youth hockey in North Carolina I really enjoyed this comment)

Bring on Canada - 2010 Olympics - Yahoo! Sports After dismantling Norway, the U.S. men's hockey team is set up for its game against Canada. "That’s OK," U.S. goaltender Ryan Miller said, smiling. "The whole house is going to be against us Sunday."

Finland's shut-out of Germany and the big game vs Sweden 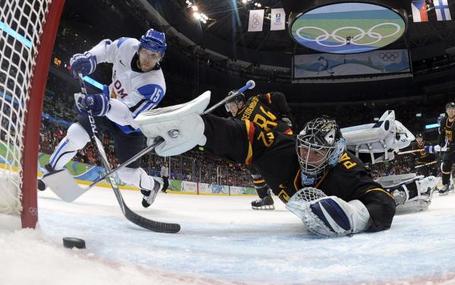 There's our boy, #15, above, potting the first goal for Team Finland last night. Ruutu with Hurricanes' teammate Joni Pitkanen contributed success vs Germany in the wee hours last night. Here's one re-cap The Hockey News: Selanne sets all-time Olympic scoring record in Finns' 5-0 victory over Germany The Finns are hungry to redeem themselves after losing the gold medal to Sweden in 2006.

In case you just couldn't stay awake, here's a link to see the video of all 5 of Finland's goals last night. And the 5th goal was indeed Pitkanen's (despite the call of the NBC announcer)

Here are the current roster stats for Team Finland after two games. Ruutu is 3rd for TOI among forwards, only behind Teemu Selanne and Mikko Koivu. Pitkanen is enjoying a respite from the grueling minutes he gives us every night as a Hurricane, here averaging less than 20 minutes/game. He is also 3rd for TOI for D-men, behind Sami Salo and Kimmo Timonen.

The Team Finland media guide is available and covers all events and all Finnish athletes, each wearing those less-than-flattering open-neck shirts. To save you some time: Joni Pitkanen page 34 , Tuomo Ruutu page 45.

And last, this post will frame the history of the Finn's rivalry with Sweden. Battle with Sweden is personal for Finland - NHL.com While the Finnish hockey program has taken great strides, there’s still something to prove any time a game against rival nation Sweden comes along.

TV coverage and frustration with the quality thereof

NBC will do it its way as long as ratings rule -- GazetteXtra For the first time since 2004, something beat Fox’s "American Idol" juggernaut between 9 and 10 p.m. Eastern Time on Wednesday.

NBC.com's Ice Hockey page with videos, photos, and links to live-streaming video of the games.

Canes Now - Maurice stays tuned to hockey Paul Maurice said he thought the Canes' Eric Staal has played a grinding style, the kind the Canadians need. He mentioned a couple of hits by Tuomo Ruutu early in Finland's first game, and noted defenseman Tim Gleason has given the U.S. just the kind of play Team USA official expected when they added him to the team.

The Hockey News: Ask Adam: The replacements I'm a huge Canes fan and I'm wondering what you think about the Ray Whitney situation. Do you think he will be dealt? Is Carolina's asking price too high in your opinion? Matt, Richmond Hill, Ont. Just the fact that there's a "huge Canes fan" in Ontario was newsworthy to me.

Tlusty providing experience for Rats - (Troyrecord.com) With his impressive play, Jiri Tlusty is clearly showing poise beyond his years and not only because he’s emerged as one of Albany’s top offensive threats with eight (five goals-three assists) in 11 games.

With the River Rats packing it up for Charlotte after this season, the Capital district is wooing other American League franchises to relocate to Albany. It's getting contentious: Maine senator jumps into Pirates-to-Albany fray - timesunion.com - Albany NY

Southeast: Good future growing on the farm - NHL.com - Division Notebooks If their prospects continue to develop the way they have so far, it looks like the Southeast Division teams are in good shape moving forward. 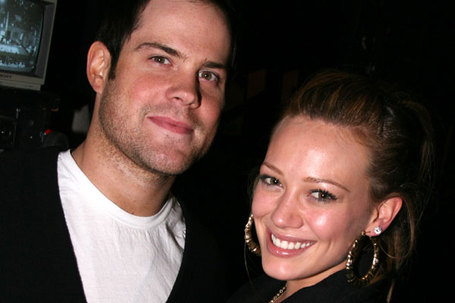 USA Hockey A Look inside Team USA's dressing room (Ryan Suter is the only player in the photo spread.)

Kane and ice dancers? U.S., Canada hockey stars talk downtime - Fourth-Place Medal "To be honest, I'm interested in seeing the curling. I've never gotten into it before, but I've played it on Wii, which I got for Christmas. I'd like to see how it is live," said Team USA's Bobby Ryan. "It's a strategic sport. I've never done it myself. Just on Wii."

Vancouver Ice Hockey quiz Take it now and tell us how you did!

Finally, for all you science geek puckheads: Science of the Olympic Winter Games - Slapshot Physics (Hockey) Take a look.