USA Hockey Making a Statement: Olympics, U-20, and U-17 Teams All Defeat Canadians

Share All sharing options for: USA Hockey Making a Statement: Olympics, U-20, and U-17 Teams All Defeat Canadians 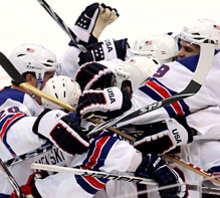 Not only did Team USA defeat Team Canada in a huge Olympics matchup in Vancouver last night, the USA Juniors team beat Team Canada for the gold medal in the Under-20 World Junior Championships less than two months ago, also on Canadian soil.

Coincidentally, USA also beat Canada to win the championship in the World U-17 Hockey Challenge, held in Canada earlier this season as well.

That's a full sweep so far this year for USA Hockey.

While it might be a bit premature to say that hockey dominance has officially shifted south of the border, let's give credit where credit is due ----- USA Hockey has made huge strides and the future looks very bright.

The Olympics team, which just earned the number one seeding in the medal rounds, is one of the youngest selected in recent American history. While naysayers could claim that Ryan Miller stole the game last night for USA, and the goalie did play lights out, the Americans were opportunists in that matchup and clicked for five goals. They blocked a ton of shots, played a physical game, and did what they needed to do to win.

Also, Team Canada was pushed to the limit by a mediocre Swiss Team and needed a shootout to beat them while Team USA defeated that same team, 3-1 in their opener.

The win last night was huge for the Yanks, but they still have a long way to go. With the number one seeding, they earned a bye in the next round and will face the winner of the Switzerland/Belarus matchup on Wednesday. If they win that game, they move on to the final four of the medal round, something many experts thought was a long-shot at the start of this tournament.

Here are the medal seedings:

Here is the remaining schedule:

Canada will have to get by Germany, Russia, and Sweden to get into the gold medal game. If both teams win out, USA and Canada would face each other in the gold medal final.

It should be interesting.