If Sunday's Olympic hockey contests pitting rivals vs rivals was to your liking, then get ready for today' s four quarter-final elimination games, with the high-speed, bone-crunching do-or-die match-up of Russia vs Canada at the center of the attention.

Here's the schedule for Wednesday:

3:00pm USA vs Switzerland in a rematch of the first game of these Olympics. (NBC)

7:30pm Canada vs Russia (CNBC) Yes, it's true for every game today that the loser goes home with no medal for these Olympics. For this game, that's a stunner any way you look at it. (For those interested in TV ratings, the sub-title is Crosby vs Ovechkin.)

10:00pm Finland vs the Czech Republic (CNBC) to be played at the 2nd smaller ice rink in Vancouver.

After the jump some links on what they're saying about these games, who's saying it, and some NHL news too. The Hurricanes are back at practice at the RecZone at 2pm, with young defensman Alexandre Picard joining his new team for the first time since he was part of the trade that sent Matt Cullen to the Senators before the break.

Please feel free to use this post as the Open Thread for the games. If it gets large, we'll start another.

Looking at some numbers

Interesting Numbers From Olympics Preliminary Round - From The Rink Our Always Astute Cory Lavalette takes an in-depth look at some less-obvious statistics through the 2010 Olympic Men's Hockey's preliminary round, plus some all-time records that are ready to fall. Great stuff.

Olympic Rosters: The Salary Cap Edition - Fear The Fin Bob "the Boss" Waeghe did some number crunching comparing salaries for Canada and the US rosters yesterday. Then I found this post, from last month over at Fear the Fin: From Slovakia to Sweden, take a look at how much 6 of the contending Olympic Teams are paid when they are working.

Stories on the Teams and the Players in Vancouver

In net, USA's Ryan Miller is backbone of gold hockey hope - USATODAY.com Ryan Miller admits to being a recovering perfectionist.

NHL.com has put up some great video spots, and keeps them short for easy online viewing. Updated all day long - click over and check it out. Player interviews, Brian Burke, sit downs with Ovechkin and Crosby on what they expect today. Pierre McGuire picks his winners: Sweden, Finland, USA. For the BIG GAME, he really likes what he saw from the Canadians last night, specifically  Eric Staal with Crosby and Jarome Iginla - but can't pick a winner in this battle, other than hockey fans who get to watch.

2010 Winter Olympics -- Keys to the game for Team USA's quarterfinals clash vs. Switzerland - ESPN Heading into Wednesday's quarterfinal game between the United States and Switzerland, we take a look at what's at stake for the Americans. Video previewing both the Canadians' game vs the Russians. Brings up a good point: While everyone's hyping Crosby vs Ovechkin, what about Sidney Crosby vs Evgeni Malkin? 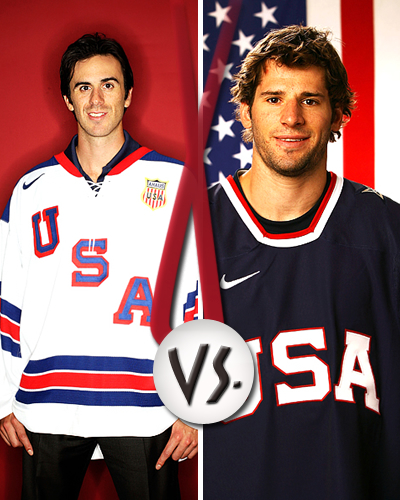 Battle Of The Olympians! Who's Your Fave On Team USA!?  Entertainment Tonight has this Olympic Fan poll for you: Ryan Kesler vs Ryan Miller. Vote early, vote often.

Celebs, Politicians, Newsmakers Weigh In Via Social Media on USA-Canada " Puck The Media Lists the best tweets and posts from non-hockey media, following the game between USA and Canada. Example:

Jason Whitlock, FoxSports.com: "Last three minutes was like the greatest round of Frazier-Ali fight.  Wow.  Hockey is what soccer wishes it was"

Olympic Hockey Then and Now | VF Daily | Vanity Fair Former Hurricane and USA Olympian Bret Hedican writing for Vanity Fair.com: This tournament is wide open for the team that wants it the most and plays with nothing but passion.

Even the Wall Street Journal (which is not my father's WSJ it seems) is posting online videos to introduce these players to a those Americans who haven't cared about hockey in ages. Breakfast and iPod questions for Team USA.

Here's this week's Hurricanes' practice schedule before they all head to Toronto for Tuesday's game vs the Maple Leafs. Home again to play next Thursday vs the Ottawa Senators and Matt Cullen.