Clicks and Clippings: Getting where they want to be

Share All sharing options for: Clicks and Clippings: Getting where they want to be

With all four of the Carolina Hurricanes' Olympians in action today, Caniacs can be proud of our hometown skaters' displays of talent, poise and character on the International stage. Though most writers believe that Team USA and Team Canada will emerge as the winners from today's semi-finals, it's no sure thing. And Hurricanes Tim Gleason, Eric Staal, Tuomo Ruutu, and Joni Pitkanen have each played key roles in their national teams' success so far.

After the jump some stories for each of these four nations who are contending for Olympic Medals. 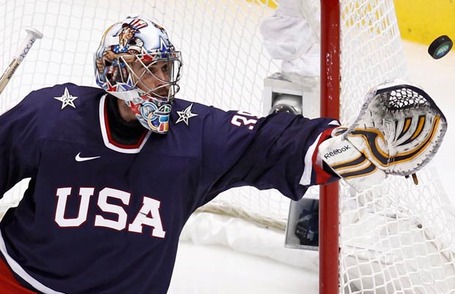 Things to watch: Gutsy high-energy play, speed and physicality, shot-blocking, and Ryan Miller. Most re-caps credited the tough and patient USA defense for winning that game vs Switzerland. Before the tournament, the inexperienced D, with last minute replacements for Paul Martin and Mike Komisarek, was considered the weakest cog in the USA machine.

Today, keep an eye on youngster Patrick Kane, who has been quiet in Vancouver so far, but who has consistently found success when his Blackhawks faced the Flames, with none other than the Finns' Kiprusoff in goal. Will 2008's NHL Rookie of the Year find Kipper as porous with his Team USA teammates setting him up?

Canes fans will recognize the consequences of this game statistic as well: The USA has the youngest roster here (average age 25.6 years) and Finland has the oldest (30.7 years).

Semifinal opponents USA, Finland play much the same way - USATODAY.com As members of U.S. men's hockey team prepare to play Finland in the semifinals today, they'll need to look in the mirror to find their strategy.

Many tweets repeated Coach Ron Wilson's quip postgame Wednesday, comparing USA's blocked shot count in the game as greater than the press corps' typos; but it seems the statement was apparently abridged. Here's exactly whose blocked shots Wilson was counting, from Purdy on Olympic Hockey: Ten things you need to know about the two semifinal games - San Jose Mercury News (great stuff in this piece overall, including a series of quotes from the players about today's matchups)

When describing the gritty play of defenseman Tim Gleason in the semifinal victory over Switzerland, Coach Ron Wilson told writers: "He blocked more shots than you guys make typoes in a day"

Post game, Gleason and Zach Parise talk about patience and the leadership of Captain Jamie Langenbrunner:

"You can get a little antsy," American defenseman Tim Gleason said. "He's making every save there was. On the bench we're like, 'Geez. Almost. Almost. Almost.'" "I haven't seen it in a long time, even in the NHL," Gleason said of the myriad blocked shots "Guys were laying down left and right. Guys are getting their nose dirty and that's what wins championships and medals."

U.S. 2, Switzerland 0 - U.S. Men Advance in Hockey with Patience, Persistence and Some Luck - NYTimes.com But the stars were the defensive pairings of Ryan Suter and Brian Rafalski, Gleason and Erik Johnson.

An insightful piece on the recent tragedy for Team USA's GM Brian Burke Barely a week after his son Brendan died in a car crash, - Sports Illustrated, 03.01.10: MAN OF HIS WORD. 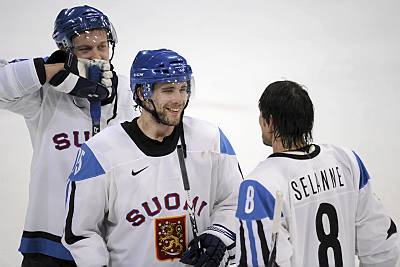 The Finnish powerplay was huge in the first 2 games (6 for 12 or 50%), but disappeared in the game with Sweden and moreso in the quarterfinal game with the Czechs (0 for 4 in the first period alone) . Today, powerplay quarterback Joni Pitkanen returns following his one-game suspension; is that going to make the difference? Once again, youngsters Valtteri Filppula and Tuomo Ruutu play hard on the top line, and Miikka Kiprusoff mans the pipes.

If you missed Pitkanen's hit on Sweden's Patric Hornqvist that earned him the suspension, it's in this video of some of the weeks' big hits NBCOlympics.com has assembled. Also has a clip of that huge rush from Russia's Anton Volchenkov forcing Eric Staal into the boards bringing Hurricanes fans more than a little anxiety Wednesday.

Pardon (or enjoy) the Google translations on these:

From Finland: Tuomo Ruutu: All the time it seemed that we are on top of a roller - Sports - Ilta-Sanomat

It seems also a little in advance as it was estimated that Finland is not a game ultimately doomed to failure goalkeeper in this tournament? - We can only say the "are you kidding me. Phew what dude", Ruutu says the norm, namely, zero-day game fought Miikka Kiprusoff.

The Finnish machine would be more or less useless unless there was electricity available. But when one plugs into the widget of a man named Miikka Kiprusoff it suddenly becomes one in a slow but safe speed producing THINGUMABOB.

Last one: Vancouver: The Big One: The New Yorker Observations by one erudite Canadian writer explaining to readers of The New Yorker magazine why hockey matters so much. He includes this quote from a colleague:

I found a new favorite player—Teemu Selänne, the Flying Finn. Fast and slick and clean. I love those Finns, maybe because saying their names is so much fun; also because, well, they’re from Finland, mysterious, exotic, remote, tiny, wacky Finland. Have you heard one Finn talking to another Finn? It’s kind of like Hungarian recorded at 33-1/3 but played at 45. 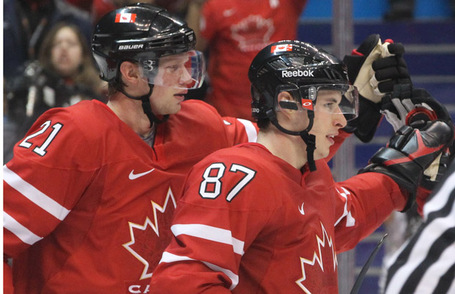 Things to watch: Will the Canadians again play with the intensity of "Gorillas coming out of a cage" that they brought to their blockbuster of a win over Russia?

The Hockey News: John Grigg's Blog: Babcock shakes Canadian tree and roles fall out Face it: Is it surprising Corey Perry or Jonathan Toews or Eric Staal or Joe Thornton has trouble playing with any sense of urgency when Rick Nash or Crosby or Jarome Iginla or Dany Heatley is up next?

Eric Duhatschek, CTV.ca: Canada can't afford to overlook Slovakia Forward Eric Staal said Canada needs to put pressure on the Slovak defence and create turnovers if they are to reach Sunday's final. "We need to focus on our game and be initiating. We want to be on the attack and be worried about our game rather than worried about theirs," Staal said. "If we are on the forecheck and attack we are going to get our opportunities to score and limit them."

Canada knows it can't overlook Slovakia - NHL.com - All-Access Vancouver "We're not trying to taste anything too far ahead of our schedule, but we have a good feeling in our room right now as we did right at the beginning of the tournament," forward Eric Staal said. "Not everybody believed us, but we always had confidence in our room. "We are thinking about the Slovaks. They are the one team that's in our way from where we want to be." 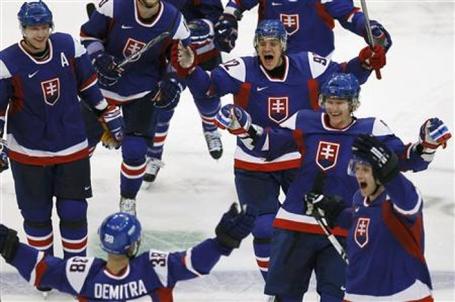 Players to watch: Zdeno Chara, Marian Gaborik, Marian Hossa, Miroslav Satan, and none other than Canadiens' goalie, Jaroslav Halak. (Just imagine the dilemma in goalie-crazed Montreal today with that last one?) With nothing to lose, can this unexpected entry to the Olympic Final Four continue to re-write Slovak Hockey History?

No pressure on dangerous Slovakia in semi-final Team Canada had barely come off the ice after Wednesday night's triumphant win over Russia when the questions started coming fast and furious about Sweden.

Slovakia tries to beat Canada at its own game | NBC Olympics Who would have thought this a few days ago, the Canadians' biggest worry going into Friday night's semifinal game against Slovakia might be the same as it was when the Olympics began: overconfidence.

On the untimely demise of Team Russia

Team Roster and statistics through quarter-finals

The disappointment over Wednesday's blow-out vs Canada is huge and the blame-game didn't wait long:

Alex Ovechkin and Russia collapse mightily in Vancouver - ESPN's Pierre LeBrun: It wasn't supposed to turn out this way for Russia. But Alex Ovechkin & Co. now have to wait four more years to get over this latest Olympic disappointment.

Ovechkin after loss: "We Tried, and Did Everything We Could" - Japers' Rink Alex Ovechkin told the Russian press following the defeat by the Canadians "We did everything we could."

And just what Ryan Getzlaf said to Evgeni Malkin on the ice:

Canes all for chance at gold - Olympics - NewsObserver.com The 2014 Winter Olympics will be held in Sochi, Russia, and Brandon Sutter of the Carolina Hurricanes would like to be a part of the Games.

Looking to next week in Raleigh:

Rats expect Peters to be in Carolina before week ends - Hockey Spoken Here - timesunion.com - Albany NY Rats coach Jeff Daniels said following practice this morning that Justin Peters likely will be called back to the Carolina Hurricanes some time during Albany’s three-game weekend.

And with Dr Suess's birthday coming up on March 2nd, Cam Ward pulls out some recipes for some Green Eggs and Ham. via the Canes Twitpic this morning. 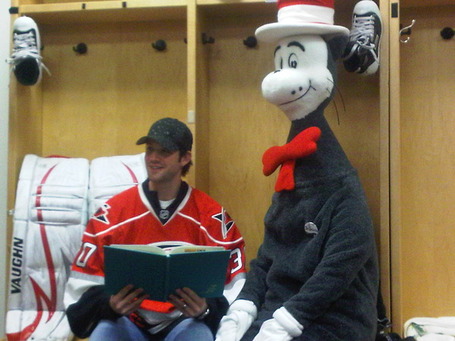