Share All sharing options for: Tim Gleason and Team USA Aim For Gold Against Team Canada

Hockey fans around the world will be treated to a dream gold medal North American matchup as undefeated and untied Team USA will battle with Team Canada in Vancouver, British Columbia on Sunday afternoon starting at 3 p.m.

While Buffalo Sabres goalie Ryan Miller deserves much of the credit for the low scores, Team USA's defense has been outstanding in front of him.  Carolina Hurricanes defenseman, Tim Gleason, has certainly done his share and even though he has yet to register a point, has a +3 rating for his efforts.

At even strength, 5-on-5 action, the Americans have an Olympics best, (+14) goal differential.  They scored 16 goals and only allowed two against in that scenario.

Overall, the powerful Canadian team has a (+18) goal differential as they have scored 32 goals and allowed 14.  But the home team ran up the scores against the worst competition and didn't fare as well in the big games as they lost previously to the Americans and squeaked by the Swiss in a shootout.

The Canadians had their hands full at the end of their semi-final contest last night with Slovakia as the surprising Slovaks scored twice in the second half of the third period and came within inches of tying the game with seconds left.  Canada held on for a 3-2 win.

Team USA on the otherhand scored six goals in the first period and almost ran Team Finland out of the rink in their semi-final game as they posted a 6-1 win.

Team Canada has had the benefit of extremely boisterous support from their loyal fans in Vancouver.  Expect nothing different on Sunday.   The home team started the tournament as the overwhelming favorites as the group is comprised of the "best of the best" in the NHL.  The participating players earn a combined salary cap hit of almost 128 million, USD.

The Americans earn about 83 million, but have the youngest team in the Olympics with an average age of 25.6 years.  The Canadians average just a bit older at 27.5 years.

Carolina Hurricanes Captain Eric Staal has done very well for his country and was moved up to the top line with Jarome Iginla and Sidney Crosby.  Staal has one goal and five assists for six points, which is tied for second highest on the team.  He has earned a +6 rating as well, also tied for second best.

Staal, Crosby, and others have proven they can rise to the occasion as the team has several Cup winners on the squad.  But goaltender Roberto Luongo has yet to win a "big game".  While being considered one of the best goalies in the league statistically for quite some time, he has yet to prove himself consistently in the playoffs.

Ryan Miller has not won the Cup, but has won several huge playoff games and series for the Sabres.

Even though Team USA has the best stats and has proven previously that they can win against the Canadians, they may also have fate on their side.  The last time the team won gold was in 1980 when they beat Team Russia in what is better known as the "Miracle on Ice".  Could 30 years be the magic number?

If the Americans do win gold, they will have swept Canada this year in major hockey tournaments (for males) as they already have victories over their northern neighbors in the U-20 World Junior Championships and the World U-17 Hockey Challenge, both held in Canada earlier this season.

The world will be watching Sunday afternoon. 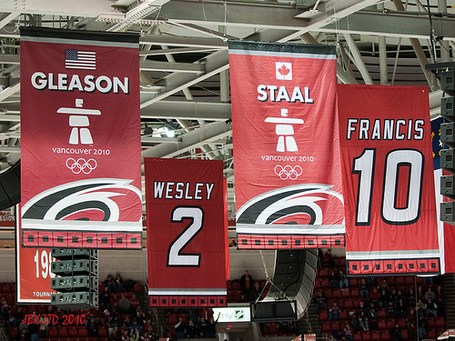 (teammates will be foes on Sunday)

Team Slovakia will be playing Team Finland tonight for the bronze medal starting at 10 p.m.  Slovakia showed a lot of heart last night as they refused to give up against Canada.  The Finns are questioning their leadership, and rightfully so.  If they fail to win bronze, they have no one to blame but the selection committee and their coaching staff.

Carolina players Tuomo Ruutu and Joni Pitkanen will be in action for Finland.