Sutters prepare to faceoff | Toronto Sun It’s not uncommon to see a slew of Sutters at the Saddledome. A descendant of the notorious hockey clan in Carolina Hurricanes colours, though? That’ll be something different.

Listen here to Brandon enthusiastically describing his feelings after practice today with the hometown press about the long awaited game vs the Flames tonight. Paul Maurice fielded a few questions on young Sutter too.

Canes don't want to get burned - NewsObserver.com The Carolina Hurricanes expected to head West this week to find teams in disarray in Edmonton and Calgary.

Calgary Herald: Flames veterans hauled into GM's office for scolding Guess these guys will be in a foul mood when they drop the puck tonight. Oh joy!

After the jump a couple breaking stories and some assorted links to tide you over till the 9pm start.

KuklasKorner  The Columbus Blue Jackets have relieved Head Coach Ken Hitchcock of his duties behind the bench and named Assistant Coach Claude Noel as the club’s interim head coach.

TSN.ca GM Waddell tells Kovalchuk to expect a trade soon Ilya Kovalchuk's days as a member of the Atlanta Thrashers appear to be numbered. Thrashers general manager Don Waddell met with the star forward on Wednesday and told him to expect a trade to another NHL team over the next few hours or days.

Writing on Deadline 2010: NHL.com trade blog - 2010 Trade Deadline  - this is ever re-freshing, check it out for the latest

The Hockey News: Top 10: Players traded for Olli Jokinen Olli Jokinen has been traded five times: thrice on draft day, once at the deadline and just this past Tuesday.

On the why's and wherefore's of dropping the gloves

With Tuomo Ruutu moved to the IR  two weeks before Team Finland opens its Olympic quest on February 17th, here are two writers' takes on the raw emotions put on display with fighting in hockey.

From The Independent's Kate Schefte: Despite the dangers, hockey's old-school, rough justice is essential to its appeal: Revenge served cold  Fans love the self-administered justice in hockey known as fighting. The players themselves love it, too, or at least they put on a good show.

McKenzie: Trying to make sense of hitting and fighting If hitting is something that stays in the game of hockey,TSN Hockey Insider Bob McKenzie asking a few interesting questions.

Looking around the NHL in general,

Who gets the Toughest Matchups: Defensemen - Behind The Net See who comes out as #1 and #2 on the Hurricanes' blueline.

and the look at this analysis of the  Strength of schedule could make or break NHL teams' playoff hopes - On the Forecheck In the chase for the Stanley Cup Playoffs, how tough is your favorite NHL team's remaining schedule? Good news if you were hoping for a top 3 pick.

Plus this: Top 10 surprises as the NHL hits the home stretch from Kevin Allen of USA Today

2010 Olympics blog -  All-Access Vancouver  Always updating - but includes some notes that Team USA will decide on whether to keep Komisarek and Martin or name replacements by weekend.

Pitkanen brings talent, experience to Finnish defense : Defenseman Joni Pitkanen has settled down to become an NHL veteran and also a prominent player for Finland in the 2010 Olympics.

Updates on the kids in the System

Rats in no rush to name an official captain : Albany Times Union.com  Forward Pat Dwyer, who was given the "C" to start the season, hasn’t played for the Rats since Dec. 13, after which he was called up to the Carolina Hurricanes.

Hope you caught this honor for Canes Prospect and Ohio State University's Zac Dalpe from The Official Site of the Central Collegiate Hockey Association Zac Dalpe Named CCHA Player of the Month for January 2010.

The Canes get some props round the NHL

NHL Power Rankings - ESPN At #24: Love the Canes' work ethic, even if they have no real shot at a playoff spot. With new captain Eric Staal leading the way, Carolina has won four in a row and five of six. It may cost them a lottery pick, but no one can accuse the plucky Hurricanes of throwing in the towel, which is more than we can say for other bottom-dwellers.

I didn't embed the videos here - but do check out the NHL goals of the week to see Ray Whitney's show-stopping move vs Boston to set up Brandon Sutter and Cam Ward stopping Patrick Kane is highlighted in the Top Ten Saves. Again, the NHL.com videos are now over in the right rail. (Chad LaRose's goal on his bobblehead night made a NHL play of the month for January - nicely done!)

With the stress in these parts lately as we await the announcement of a big trade, here are 2 pieces featuring fan favorites Chad LaRose and Jussi Jokinen, to remind us why we love the Hurricanes: 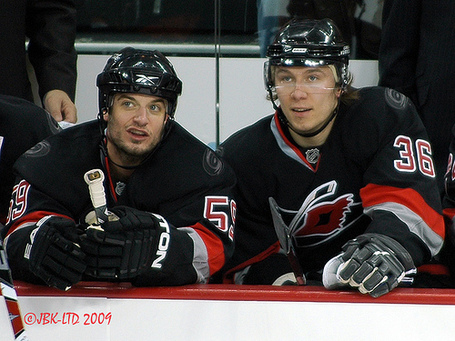 Jokinen showing he's not just a one-trick pony  Jussi Jokinen gained a reputation for his shootout abilities, but this season, he's showing he can play just as well in the rest of the game.

And last, the Chuck Norris of Hockey answers a few random questions as only he can (glovetap to Caniac1026 for the find!):