Thanks For The Memories, "Nicky" Wallin

Share All sharing options for: Thanks For The Memories, "Nicky" Wallin

The Carolina Hurricanes are now in a position not many thought they would be in at the beginning of the season.   While making the playoffs is not mathematically impossible, it's pretty much a pipe dream at this point.  When a team has spent more time in last place, than out of last place, it leaves a general manager little choice but to start a rebuild.

And so it begins for Carolina.

Niclas Wallin is the first casualty and many fans are sad to see him go.  The player, also known as the "Big Swede", will be remembered for his fun-loving times at practice, his intensity during games, and the clutch, game-winning goals he scored in the playoffs.

Wallin was drafted by the Canes in the 2000 Entry Draft in the fourth round and has never played for another NHL franchise.  He signed a four year contract with a no trade clause back in 2006 because reportedly, he loved the area very much and he did not want to move his family.

There were questions about his intentions at the end of this season, as word had it that he wanted to move back to Sweden and finish his career back home.   That seemed to be the sticking point behind the negotiations of this trade as the Sharks wanted to extend Wallin's contract longer than he wanted.

But all's well that ends well for the Swede as he gets a good chance to go deep into the playoffs with this San Jose team.  If this indeed is his final year in the NHL, it might be a great way to go.

"It’s like winning the lottery," Wallin said to the media earlier today. "This is a team that obviously has a chance to go all the way."

The defenseman will probably be missed the most in practices.  Nik was the guy wrestling with someone in the corner.  He was the one who would give an injured player a couple of jolts along the boards, to see if they were ready to compete in a game.   He was the one with a big smile when a teammate needed it.

But that's not to say he couldn't bring the intensity when it was needed.  The Swede was a consistent, physical presence on the blueline and was a top performer when he was healthy.  He did suffer from his fair share of injuries though, and missed a lot of games over the past few years.

Never known for his offensive prowess, some of Wallin's goals will be remembered as being among the most dramatic in franchise playoff history as he earned the nickname, "The Secret Weapon".

In the 2002 playoffs, he scored two game winning goals in overtime, one against Montreal in game four of the conference semifinals  and one against Toronto in game two of the Eastern Conference Finals.

In the 2006 playoffs, he scored the game winning goal in overtime against New Jersey in game two of the conference semifinals.

He presently holds the franchise record for most playoff goals scored in overtime, (3).

Never one to complain, Nik is down to earth and is one of league's good guys.  He and his family reside in a modest neighborhood in Apex and were just as likely to be found grabbing a bite to eat in a close by fast food place, than anyplace else.  He was also very active in youth hockey and will be missed being seen at the local rinks.

What will happen in the future?  Will he stay in San Jose, come back for an encore in Raleigh, or move back home to Sweden?  Even Wallin does not know at this point, but wherever he ends up, most Caniacs will be in his corner just like he's been in theirs' for the past 10 years. 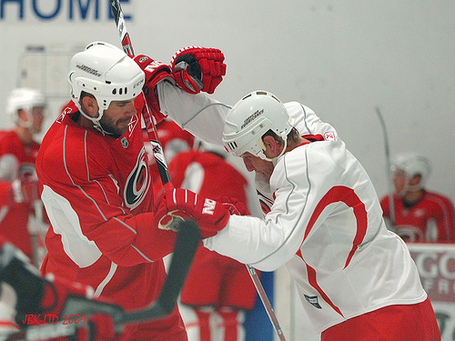 Wallin and Tim Conboy jousting at practice. (photo by LTD) 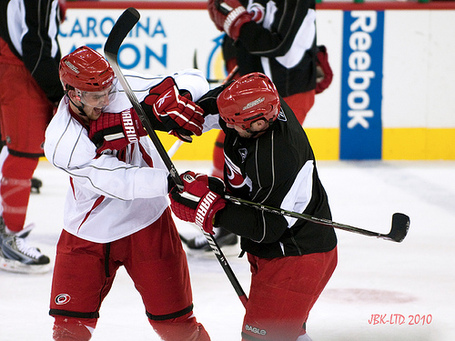 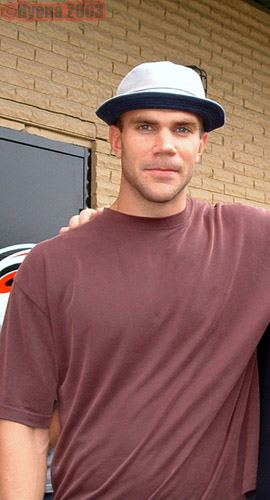