Clicks and Clippings: Checking in with the Big Swede

Share All sharing options for: Clicks and Clippings: Checking in with the Big Swede

When news came yesterday that the Niclas Wallin trade to the San Jose Sharks was officially a "done deal", apparently ending his career with your Carolina Hurricanes, I was actually delighted to hear he was moving to such a highly talented organization. While I will surely miss seeing his impressive yet humble presence on the ice and around the local RYHA games,  it sounds to me like he has very successully turned a  difficult  situation into a promising opportunity. Is this all because his parents back in the Old Country taught him to "work hard, don't complain"? Check it out, Caniacs: Nic Wallin, San Jose Shark.

LATEST: Wallin joined his new teammates in Toronto, where they take on the Maple Leafs tonight. Jame Mirtle caught up with him after practice and just posted this piece. Wallin pumped to be a Shark - The Globe and Mail Weekend deal shuffles defenceman from the Eastern Conference basement to the West's penthouse. He will skate in his first game as a Shark tonight against the Leafs alongside new D partner Dan Boyle.

Also this, from the San Jose Mercury News: Wallin paired with Boyle, Helminen gets call-up  | Working the Corners Wallin connected with his new teammates around 9 p.m. last night and headed out for steaks with Douglas Murray. It’s the first time in a while that either have had a Swedish teammates, so the conversation was not in English.

UPDATE: Looking at the Center Ice TV Listings, you can watch Wallin in action in Toronto on TWC-Raleigh Channel 733 at 7pm tonight.

More links to bring you up to date, before the Canes take on the Panthers tomorrow night as they begin these last 3 games leading up to the Olympic Break, after the jump.

Regarding the status of Cam Ward, Chip Alexander has this update: Canes Now - Doctors to observe Ward for couple weeks Canes general manager Jim Rutherford said today that the doctors treating Cam Ward's back injury want to observe him for a couple of weeks before making a decision on how to best move forward. Here's the Hurricane's most recent release on the subject: Ward's Diagnosis Will Wait - Carolina Hurricanes

Paul Branecky had this to update the good news on Tuomo Ruutu and updates on Erik Cole, Scott Walker and Chad LaRose. And a little more on the subject from Canes Now - Ruutu ready to rejoin Canes' lineup

With the "first trade freeze deadline" set for midnight this Friday, a few pieces to anticipate what will happen this week (or will they all wait till those last 3 days before the "final Trade deadline" after the Olympic break, March 1 to 3.)

Here's a familiar voice with his take on Rumors From The Rink - Tim Thomas On The Block?   The Ilya Kovalchuk sweepstakes are over but there are still plenty of teams out there who need help and who will be looking to add a piece or two before the deadline. Most in need right now are the Boston Bruins, Buffalo Sabres, Philadelphia Flyers, and Nashville Predators.

There are some suggesting that the Penguins are not alone in Pennsylvania trying to make cap-room for the Wizard. Peter Laviolette's Flyers may have their eye  on Ray Whitney as well. Spector's Hockey - NHL Trade Rumors for Monday, February 8, 2010.

Florida Panthers: Sexton says he'll try to make a trade "If you're going to acquire a player, what teams want from you in return is ridiculous," GM Randy Sexton said. "I don't mind paying a fair price for a player we're going to keep, but for some of the rental players that are out there, some of the prices being asked are ridiculous."

Looking past this season:

The Hockey News: Ryan Kennedy: Expect quick recovery in Carolina The Carolina Hurricanes have been euchred by injuries and hampered by the remnants of an old guard about to move on this season, but there’s a slew of reasons to believe this team will be back in the playoffs next season and capable of going a round or two.

Southeast: Stamkos making his mark as a teen - NHL.com  Also offers insight into the Hurricanes' bid to host the All-Star Game.

World Rankings from IIHF Pre-Olympics: From #1 to 6, they are: Russia, Canada, Sweden, Finland, USA, Czech Republic

Hockey - 2010 Olympic TV Schedule | NBC Olympics View NBC's 2010 Olympic TV schedule for Hockey across NBC, CNBC, MSNBC, USA, UHD and Universalsports.com. I hope some of you will join me on a thread here, watching hockey at 3 in the afternoon next week. Stay tuned for TV schedule updates.

Lots of interesting stats here, but the writer's observations on Jussi Jokinen and Eric Staal, at the end, are worth the click.: The Hockey News: Brian Duff Rarities, revelations and oddities

The Hockey News: Ken Campbell: Ryan Miller will be USA’s No. 1, play every game (good news for Eric Staal, Joni Pitkanen and Ruutu who get to challenge him again on Thursday)

Audio of Tim Gleason on NHLNetwork after the announcement Thursday.

Canes released this video talking with Gleason after practice today

McBain making most of time, Times Union - Albany NY "When you get the opportunities that have been given to me down here, to play in every different role and position, it's definitely been beneficial for my development," McBain said

Rats in no rush to name an official captain : Albany Times Union.com  Forward Pat Dwyer, who was given the "C" to start the season, hasn’t played for the Rats since Dec. 13, after which he was called up to the Carolina Hurricanes.

Last, Hockey in a War Zone 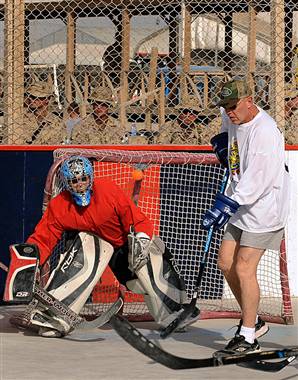 Apparently even those in the media who aren't puckheads understand how cool this is:  Soldiers find time for hockey in Afghanistan -  msnbc.com There's no ice and no puck, but no matter. The Kandahar Ball Hockey League allows Canadian troops to get their hockey fix — even in the middle of a war. Puck Daddy covered this too.