Clicks and Clippings: Ups and Downs

Share All sharing options for: Clicks and Clippings: Ups and Downs

Some evening links looking at how the NHL season is playing out with only 3 weeks left, while steadfastly avoiding the P-word.

Canes still have plenty to play for - WRALSportsFan.com Mike Maniscalco posted this earlier today: The Canes making the [word deleted] this year has about as much chance of finding a Barry Manilow CD in a biker bar, but that doesn't mean that the final stretch isn't important to the organization.

Paris (Ontario) native, Zac Dalpe, picked up by Carolina Hurricanes - Paris Star - Ontario, CA Contract negotiations began on Monday and were not finalized until Wednesday. "I had final exams this week. They were a good buffer to keep me from thinking about the contract," said Dalpe. Atta boy, Zac, you made this hockeymom  smile. (Also pleased to report, he also got his haircut - see link.)

The Hurricanes Report: This 36-minute podcast with the Hurricanes' Kyle Hanlin and Paul Branecky posted this morning, as the team took a day off after an emotional week of highs and lows. They look at developments related to McBain and Dalpe, as well as progress of Cam Ward in his recovery. Well worth your time while you read through these other links

After the jump, the team that is peaking at the right time (hint: ends with "yotes") and those who seem to be headed in the opposite direction, some projections for summer business, and how women puckheads are gaining clout in hockey marketing.

Although the basement-to-penthouse record of the Colorado Avalanche comes close for its Cinderella qualities, the tale of the Phoenix Coyotes, rising from the ashes, became the biggest feel-good story of the weekend (if not the month). Written off as a joke in the desert in the summer, the 'yotes won their 9th game in a row last night, in a shootout no less(why do it the easy way?). As unlikely a story as you might script, the team now sits atop the Western Conference, ahead of the San Jose Sharks who seem to have gotten a head start on their annual rite of choking come the playoffs (oops!) hockey's spring season.

No mirage here: Coyotes among surprises of the year Nobody - hockey experts, fans, and players alike - could have seen it coming. It's a script that Hollywood would love - and some might say that the film has already been made, give or take a few details.

Tippett hiring a catalyst for Coyotes' success - NHL.com - NHL Insider "...Because of the off-ice distractions they were very bonded internally. They wanted to do well. From a coach's perspective, that's a nice way to start." -- Head Coach Dave Tippett

No Deal Yet for Coyotes - Slap Shot Blog - NYTimes.com Here's the underpinnings of the business side of this deal: The remarkable run of the Phoenix Coyotes, who entered the season under bankruptcy protection and are now operated by the league, continued last week. Nevertheless, the projected sale of the Coyotes has encountered a hitch. Or more succinctly: If Coyotes win Cup, does Bettman get his name on as owner? - Puck Daddy

Talk about opposing stories: the Sharks dropped their 5th in a row, losing 5-1 last night, to, of all teams, the 30th-ranked Edmonton Oilers. WTF? Sharks struggles continue as The Blame Game begins - Fear The Fin

No joy in Flyersville | Philadelphia Inquirer | 03/21/2010 With announcement that Jeff Carter has a fractured foot, only days after goalie Michael Leighton goes out 4-6 weeks with a high-ankle sprain, suddenly, the playoffs  [the hockey games played after April 11th] aren’t a lock for the Flyers.

The Albany River Rats have a rough weekend

3-loss weekend has Rats reeling -- Times Union - Albany NY After three games in 48 hours, the Rats are in a maze and a daze.

Rats notes ‘n quotes: Tough return for Tlusty - Hockey Spoken Here - timesunion.com Said Casey Borer:  "We knew we had to crank it up another notch. We fought hard, but we’ve just got to pay more attention to detail."

The good news is that Zac Dalpe started his pro career and Jiri Tlusty returned from a lengthy injury Saturday. However, this fightcard from the Rats' game in Hershey Friday night is astounding. Casey Borer really doesn't need to be doing that.

NCAA Frozen Four - Seedings & Matchups - ProHockeyTalk  Boston College (with the Canes' 2009 2nd-round pick D-man Brian Dumoulin) shows up as the 1st seed in the NE Regional. Another site loaded with previews and numbers is here at Inside College Hockey : Driving Toward Detroit 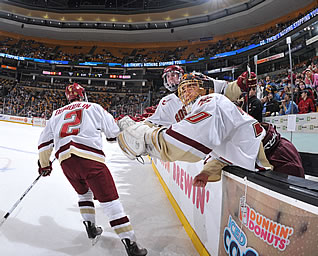 Brian Dumoulin celebrates a score in Saturday's OT thriller over Maine (via www.hockeyeastonline.com)

Boston College Takes Down Maine in Overtime for Hockey East Championship - NESN.com Lombardi was the hero in overtime when he netted his third goal of the night at 5:26 to send TD Garden to their feet. Price and Brian Dumoulin worked a cycle down low to find Lombardi parked just outside the crease. Check out this gamesheet showing where Brian Dumoulin picks up 2 assists, including the OT game winner. Finished +2 for the game.

The Draft and other "Front Office" assignments

2010 NHL Draft Lottery Odds A chart from the experts at TSN.ca that will be updated daily. Let's think of this as the yin to the yang of sportsclubstats. As Carolina's chances of making the playoffs playing hockey after April 11th dwindle, Jim Rutherford's chance of nabbing the first pick overall in Los Angeles come June increase.

Remember when we chewed on this question ourselves for most of November:  If the Oilers win the lottery do they choose - Hall or Seguin? The Edmonton Oilers have all but locked up their spot as the NHL's cellar dwellers, giving them a 50 percent chance at winning the NHL Draft Lottery. The question that presents itself now is - who will that player be? Taylor Hall or Tyler Seguin.

Fox Sports: Spector's Blog > A Thin NHL Free Agent Market. Looking at the latest list from NHLnumbers.com it's not a particularly deep pool of available talent.

And, last, a little more analysis of the trades that already happened during the current season: The Hockey News: Edward Fraser's blog: The best and worst trades of 2009-10 Including this one:

Among the worst: (or best from the Canes point of view) March 3, 2010: The Capitals acquire Joe Corvo from the Hurricanes for defenseman Brian Pothier, Oskar Osala and a ’11 second round draft pick.

Did you see Joe was a healthy scratch the game in Tampa, after he potted two against the Hurricanes Thursday in Raleigh? As the voice of the Capitals, Joe Beninati said, "Gabby must be sitting him for not getting the hattrick". Tough crowd up there in DC.

Where the Girls are:

This study came up in a piece I saw Friday:  Rapleaf Study on the Demographics of Sports Fans on Social Networks Within social network sites (aka blogs), women fans have largest presence in HOCKEY, over all other sports surveyed. Y'don't say?

Which segues nicely to this: The Hockey Bikini: Has NHL figured out what women want? - Puck Daddy (Answer: No)

....if I didn't take this opportunity to salute one of the greats playing hockey today who posted his 600th career goal in Anaheim last night:

One milestone down, another to go for Anaheim Ducks forward Teemu Selanne - ESPN Pierre LeBrun asks: Is Selanne the greatest Finn player ever?

Finally, this Q&A in the Anaheim dressing room with with the Great Finn after the game (this runs 6 minutes of happy talk, with a Finnish accent):