Clicks and Clippings: What a week!

Share All sharing options for: Clicks and Clippings: What a week!

Above, Hurricane's Veteran Rod Brind`Amour scored last night's Game Winning Goal, to cap off a week of non-stop hockey action, which began with the Semifinal victory of Team USA over Team Finland in Vancouver last Friday afternoon - only one week ago.

Quite a week, hockeyfans, eh? If you're still de-pressurizing from the adrenaline rush of those Vancouver Games, the anxiety of Wednesday's Trading Deadline Announcements (and Twitterfest), and now the unexpected mood-booster of your Carolina Hurricanes' unlikely 7-game winning streak,  despite the ever-revolving door to their dressing room, then I'm right there with you, Caniacs. Isn't it awesome?

How's about this statistic:

During the Hurricanes’ seven-game winning streak, they have outscored the opposition 29-12.  (Remember, folks, that's without our franchise backbone Cam Ward in goal)

After the jump, I've linked a few stories and several videos, talking with the players, some familiar, some new. Maybe give us all some insight on what it was like for these hockey players on the inside looking out. For the most part, sounds like some well-earned fun!

Some thoughts and analyses of the machinations of GM Jim Rutherford the last couple weeks.

No perfect formula for building a contender - Eric Duhatschek - The Globe and Mail Some thoughtful post-trade deadline analysis from the center of the Hockey Universe, including these very positive observations of the Hurricanes good moves:

The smartest teams are the ones that understand how it is better to bottom out and then re-assert themselves rather than forever plug away in the middle. Unlike the Edmonton Oilers or Toronto Maple Leafs, the Carolina Hurricanes found all sorts of takers in their fire sale, a sign that they had more quality on offer. Two players, Matt Cullen and Niclas Wallin, were dispatched before the Olympic break – the rest left Wednesday and included Joe Corvo, the ex-Senator who should thrive in Washington's go-go system, where risk is tolerated more than virtually anywhere else in the NHL. Carolina's challenge in the short term will be winning without goaltender Cam Ward – Justin Peters looks as if he'll get a run of games here – and the only downside might be that their chances at a lottery pick slips every time they win another game.

Luke DeCock: Canes have hope for the future -  NewsObserver.com If this is what next season is going to look like, plus or minus a few players, then fall can't come soon enough for the Carolina Hurricanes. This spring may not be so bad, either.

"It's my time to come up here and prove something," Zach Boychuk said. "There are only 11 forwards here right now, so there's a spot up for grabs, and there's lots of capable guys down there [in the AHL] able to take them - guys like Jiri Tlusty and Jerome Samson and Drayson Bowman. "For me to get the call, I feel very happy about that and now I just have to do the best I can to prove I'm the one they want."

First, taking a look at the players to whom we said good-bye...

Above is a quick clip of his second goal for the night, a backhander from his knees. For this, we got a lousy 7th round pick?

Then, here's the postgame, where Scotty speaks with the DC Media (anybody know what's with the hat?)

If you missed his last interview in Raleigh after he got the word he was headed to the Capitals, you must check it out here. Then here's this Intro video  from the Caps site, with comments from Corvo too. 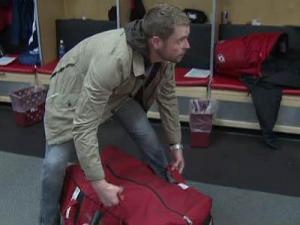 photo via wwwcache.wralsportsfan.com (which, just so you know, is not the site of one of those unreliable-as-a-Toyota-gas-pedal bloggers)

Andrew Alberts met up with his new Canuck teammates in Chicago. Here's his introduction to the fans in Vancouver. Ryan Kesler makes a cameo appearance. (Does anyone else notice Albe now says "out" funny?)

Stephane Yelle speaks | All Things Avs -  A couple minutes of video with Stephane Yelle, embedded in this story from the Denver Post. As writer Adrian Dater puts it: "No, Yeller isn't the most colorful interview still, but it's good to have him back."

And this sentimental take, posted over at  Deadline day thoughts in real time from Avalanche blogger known as Jibblescribbits

Stephane Yelle Traded to the Avs:  Finally a move I can get behind. Yelle is more than nostalgia. He's a veteran leader with cup rings who understands Colorado. Not only that but he's an excellent defensive zone face-off guy, and will be an anchor on the 4th line with Hendricks and Durno/Tucker. The Avs have needed a face-off guy for a long time, maybe even since Yelle. Yelle also happens to be the name on the back of the first sweater I ever bought, which i'll be wearing tonight, and possibly next week as well.

Repeating the excerpt from the comments I posted above about the potentially great fit between Joe and the Caps, from the Globe and Mail: Joe Corvo, the ex-Senator should thrive in Washington's go-go system, where risk is tolerated more than virtually anywhere else in the NHL.

Postgame Video from WRAL I love how Pothier talks about how responsible the Canes' forwards are with Paul Maurice's system, especially after we've heard Corvo's wide-eyed comments about the Caps system being go-go-go. While over at WRAL.com video posts, you might also check out several of their recent interviews with Paul Maurice, Tuomo Ruutu, Eric Staal and Tim Gleason,both from practice and postgame yesterday.

Canes Now - Pothier hopes to be part of something special  "A couple of years back in Washington, they won 13 straight and they got the playoff spot on the very last day," Pothier said, not mentioning it came at the expense of the Canes. "it's a great opportunity to do something special." (Get that man another round of the Kool-Aid)

New Defensemen Settle in Quickly - TTS Blog Paul Branecky focuses on Pothier and recent add, Alexandre Picard, and their roles on the Hurricanes blueline. "Obviously it was a little different. I’ve never really seen a team trade three defensemen in one day," said Alexandre Picard, a former Senator. "I think we proved last night that even though we came in from different teams or are just getting called up, we all contributed and played good minutes against a good team. I think we’ve got to be pretty proud of ourselves and keep it going."

If you didn't already spot this in the Fanshots yesterday  - here's a July 2008 video of an interview with our newest Finn that I think you'll like.

Is Oskar Osala the Second Coming of Tomas Holmstrom? Said  Capital's Coach Bruce Boudreau: "He's got skill, he goes to the front of the net, he works the corners, he's all of those things."

Hershey Bears forwards Bouchard, Perreault will miss Osala | PennLive.com "He’s probably going to be able to play a lot in Albany, whereas maybe he wasn’t getting as much ice time here. It’s good for him. He’s a good kid and he’s got a lot of up to him. He’s big, he’s strong, he’s really skilled. I wouldn’t be surprised if he ends up in Carolina at the end of the year."

Looking at New Prospects, (and the 2010 Draft) - TTS Blog from the Hurricane's own Paul Branecky who provides some of the best insight around, as always.

Found this from when Justin was with the Maple Leafs (and Marlies)  in May 2009, before he went to the Anaheim Ducks, 3rd in line behind Jonas Hiller and J-S Giguere last summer.

The Infestation: Rats welcome new faces after trades The acquisition of Justin Pogge gives Albany some stability in net as Justin Peters remains in Carolina. Canes' starter Cam Ward is out indefinitely and Rats' rookie Mike Murphy is sporting a cast/finger-splint. Recently acquired back-up goalie Ryan Mior, who was signed to a professional tryout contract on Sunday, will likely be released after he recovers from an undisclosed injury suffered on Tuesday.

TheAHL.com | Rampage's Pogge named Player of the Week February 15, 2010 - San Antonio Rampage's Justin Pogge made three consecutive starts over the weekend and won them all, stopping 97 of 100 shots faced.

Wrap up on the Olympics

In case you missed your chance to witness all the hardware that came back with the Hurricanes' Olympians on display at the RBC last night, these links will give you one last blast of this memorable 10 days of hockey for the Canes players who lived it.

Tim Gleason with the Insiders - audio link from 620 the Buzz  Tim Gleason joined Mark and Mike to talk about the Olympic experience and the trade deadline. They do a great job coaxing some less obvious answers from him. For instance: Timmy Thomas may be his favorite new guy buddy from Team USA. If you want to see more of Gleason, the Canes have put up this video over here.

Canes' Staal soaks up golden experience - The Globe and Mail Forward becomes only the 23rd player to join the "Triple Gold Club". Staal spoke on camera in Raleigh too, here.

Team Finland's Tuomo Ruutu describes in his delightfully inimitable way how special his Olympic experience was in this clip:

Wilson surprised by Canada's treatment of Brodeur - The Globe and Mail Ron Wilson: 'This is the greatest goalie who ever played, and it kind of tarnished his career on one night'

Exciting Olympic Tournament Shows Hockey at Its Best - NYTimes.com The reputations of the Canadian and American players were burnished. It is impossible to think of Corey Perry, Brenden Morrow, Tim Gleason and so many others in a dismissive way again after their excellent performances in Vancouver.

Count on NHL being part of the 2014 Games  Four years from now, in Sochi, the NHL will be back with full participation - even if commissioner Gary Bettman is publicly dragging his heels over making a commitment now.

In Wilbon's World: Crosby miles ahead of Ovechkin - Michael Wilbon (Washington Post). Sidney Crosby's gold medal-winning goal Sunday further separated him from his rival on the ice, Alexander Ovechkin, who had a far less memorable time in Vancouver. This column got the Caps fans more than a little worked up it seems.

Solving the 6 biggest mysteries from the 2010 NHL trade deadline - Puck Daddy The Ray Whitney non-trade got some more ink (or pixels) after 3pm Wednesday had come and gone (but Ray was still here). Here at Canes Country, we had dozens of Kings' fans check in on our poll from this blog in LA. Reading the comments, they sound a bit like they've been jilted.

From Albany, progress on the acquisition of a new AHL franchise with the departure of the Checkers/Rats to Charlotte NC, next season.

For the eternal optimists here, another take on how that chart at Sports Club Stats works.The Race in the East: Why Atlanta’s a solid bet for playoffs - Puck Daddy 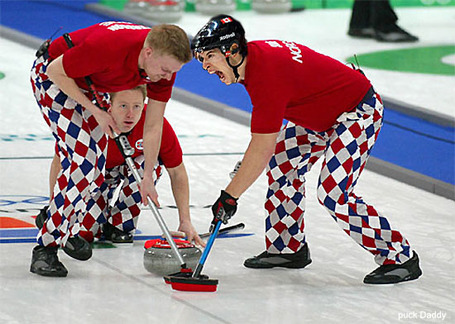 via a323.yahoofs.com (Wysh just tweeted that this made the Norwegian Curling Team's Facebook page.)