While the Carolina Hurricanes 2009-10 NHL season fell short of the expectations we brought to the table back in October, that doesn’t meant there weren’t many bright spots for the players and fans this season. Canes Country thought we’d look back at some individuals whose performances were exemplary, and whose efforts and skill inspired us to keep watching. Using the traditional team and annual NHL Awards as a guide, Cory, Bob and I have each nominated a player from the Carolina roster for nine of these awards. Over the course of this week we have been asking you, our insightful readers, to vote for and tell us why you think one Hurricane player deserves our recognition for a job well done.

The Frank J. Selke Trophy is an annual award given to the forward who best excels in the defensive aspects of the game. The winner is selected in a poll of the Professional Hockey Writers' Association at the end of the regular season.

The Selke Trophy was presented to the National Hockey League in 1977 by the Board of Governors of the NHL in honor of Frank J. Selke (read his bio here), one of the great architects of NHL championship teams.

Who received the Selke over the last 3 years?

After the jump Bob, Cory and Hockeymom each make their nominations and tell why.

And the nominees are:

Some Staal critics are probably about to laugh at this nomination, but before you laugh, check out the stats. Staal has the best plus/minus of any other forward on the team. (Tied with Kostopoulos). He also leads all forwards on the team with the most average time on the ice.

He faces the best competition in the league, night after night and he's called on to play in all situations, the PP, PK, and even strength. The stats don't lie, he is doing something right. He's just as deserving as anyone else on the team this season.

I mentioned in an earlier post that Sutter was emerging as the next Brind'Amour. How so? Well, he leads by example, contributes offensively and plays a smart game. Furthermore, he's solid in the faceoff circle and wise beyond his years in his own end. Sounds a lot like Brind'Amour in his prime, right? Those kinds of attributes earned No. 17 two Selke awards, and Sutter's ability to contribute in all three zones has him on his way to a future Selke.

Not only has Sutter made himself difficult to play against, but he's done so without taking penalties (two all season). His smarts, poise and determination are what Selke winners are made of. It won't be long before Sutter is vying for an NHL-wide Selke. 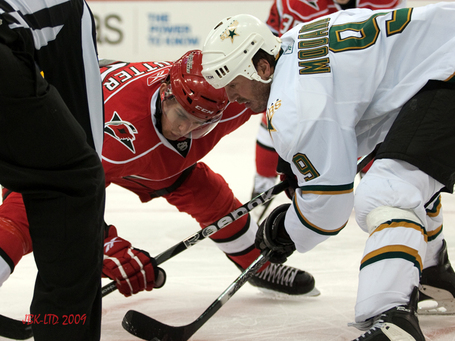 Brandon Sutter watches intently for the puck to drop, with the Stars' Mike Modano (Photo by LTD)

To be honest, Kostopoulos was not the first name that came to mind for recognition for this award. Until I started looking at the stats. TommyK was the go-to defensive forward for the Hurricanes this year. For the season, Kostopoulos lead the Hurricanes in Penalty Kill Time on Ice, with 53 minutes more than Brandon Sutter, and averaging more than 2 minutes per game. (BTW - he played all 82 games, thank you very much). He lead the team in plus/minus at +4. He put up the most hits among forwards and blocked the most shots. The MOST. And those 2 short-handed goals plus an assist on Cullen's shortie? Also the top-of the-list for Short-handed scoring. Sure he took some penalties himself - including the 10 fighting majors - were those good or bad for the team's efforts to win? For the most part, I'd say they were okay. (And he had one less minor penalty than Eric Staal.) We heard his thoughts about dropping the gloves when Bob spoke to him last week.

Sometimes you try to do different things to help give your team an edge in the game. For me, a lot of the fights I don’t end up winning, it’s more about showing up. It’s about showing your team that you’re willing to do it and just trying to give them a jump. You know, if I could score 50 goals, I probably wouldn’t be fighting. (laughs), but you just try to help your team out anyway you can.

If we're looking for a place to recognize the impressive numbers Kostopoulos put up for the Hurricanes this season, this discussion on the Selke would no doubt be the best place to start.

Finally, if you'd like to look back on the previous award posts from this week and see the results and/or vote (polls are still open) here are those links:

The Chiasson, The Vezina, The Calder, The Lady Byng, The Masterton , The Norris