Friday night in Charlotte, the Hurricanes newly relocated AHL affiliate Charlotte Checkers celebrated the 2010 Entry Draft with an event of their own. Among those at the gathering, COO Tera Black, Head coach and GM Jeff Daniels, members of the Hurricanes' Storm Squad, and both "Chubby" and "Stormy", mascots of the Checkers and Canes.

The Checkers unveiled the designs of all three of the team's AHL jerseys, saying "The team's jersey designs have adopted the Hurricanes' red, black, white and silver coloring along with matching jacquard bands around the waist. By virtue of the team's third jersey (black), a new secondary logo was revealed. The mark combines signature characteristics of each team's branding, including the bear mascot and hurricane warning flag."

More on the schedule, tickets and the other two jerseys, after the jump.

The Checkers AHL debut home opener will be Friday, October 15, at the TWC Arena in uptown Charlotte. With the Raleigh-based Hurricanes' October schedule that was announced Tuesday, the Checkers will be the only hockey in the Old North State until the Canes return from their 16,000-mile four-nation World Tour, not playing their home opener in Raleigh until October 27th.

"October 15th will be a night Checkers fans won't soon forget," said Tera Black. "We are looking forward to an unprecedented level of hockey as we unite enthusiasts of the sport from throughout the Carolinas."

Let's hope the Checkers are inspired by the welcome they receive from hockey-starved fans when they take the ice in front of as many as 14,000 in Charlotte for the first time. Hockeymom has learned that there have been conversations between officials at Canes Country and the Checkers management to have a "Canes Country Night" at a weekend game early in the season. We will keep you informed as this develops.

The team also confirmed the availability of joint ticket packages that include tickets for both teams, saying "The packages include five pre-determined Hurricanes Saturday home games and five or 15 Checkers games, starting at just $159." (Keep in mind, that's for ten games.)

Other off-season happenings include the change-over of the Checkers website to a new look, with AHL standards in early July. Also watch for the AHL season schedule to be announced in August. You can follow the Checkers on Twitter @CheckersHockey to keep up with all this as it happens.

Finally, below are the designs of the home and away jerseys that were also unveiled Friday. According the the Charlotte Checkers facebook page, all jerseys will be available for purchase in August. 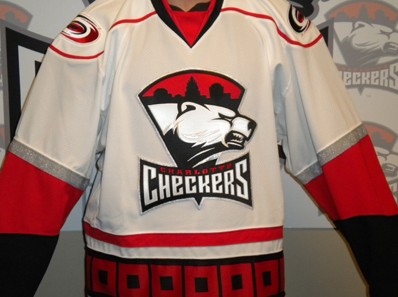 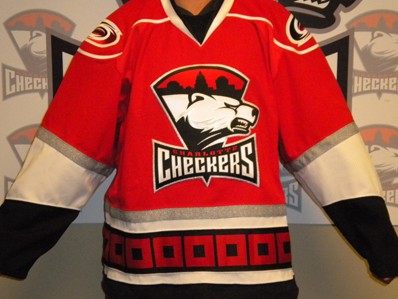