One Carolina fan’s thoughts on Leighton: You just never know

Share All sharing options for: One Carolina fan’s thoughts on Leighton: You just never know

Last weekend, it was the end the First period, Game 1, 2010 Stanley Cup Finals in Chicago: Flyers vs Blackhawks. Flyers' goalie Michael Leighton skates to the dressing room with a 3-2 lead, while NBC's Pierre McGuire and Mike Milbury chat intermission hockey fluff with Ryan Miller, the Team USA hero and MVP of the 2010 Olympic games and now a 2010 Vezina nominee. Really. These are not the playoff roles foretold for Leighton or Miller by any followers of NHL hockey only the month before.

Like many Carolina Hurricanes fans, I find the spotlight suddenly shining so brightly on Michael Leighton to be just a tad difficult to get my brain around. Don’t get me wrong: it’s not that he doesn’t deserve it, it’s just… I guess I never saw it coming. Having considered Leighton as one of "our own", from the time he was signed and played for the Albany River Rats in the 2007-08 season, we Caniacs have followed him more closely than most hockey fans over these three years (which is evidenced daily by the dozens of articles in the national hockey press, repeating the tale of his roller coaster career).

Here in Raleigh, we remember how, back in April 2008, Leighton was the #1 goalie for the Albany River Rats as they faced the Philadelphia Phantoms in the first round of the Calder Cup playoffs. With the series tied at two games apiece, Game 5 was played in Albany on April 25, 2008. That was the one for the record books, and was Leighton’s claim to fame until last month in Boston. That was the game where Leighton faced an astounding 101 shots, saving 98 of them, in the five-overtime losing effort that was featured on ESPN. Never had an AHL goalie faced that many shots, made that many saves nor had an AHL playoff game gone that long. Here’s the re-cap.

The following summer Hurricanes GM Jim Rutherford signed Leighton to a one-way NHL contract to become Cam Ward’s back-up. Do you remember how he did quite well the first several weeks under Laviolette – as Ward’s consistency and confidence actually seemed to be the shakier of the two?  Fast forward one year, and Leighton had played so little and his performance record was so erratic, it was not shocking to anyone tracking the team when he was put on waivers in December 2009. He was of course subsequently picked up by the Philadelphia Flyers, when injuries to their goalies left them scrambling for a #2 – and besides, with cap issues looming, Leighton’s price on re-entry waivers was tough to beat.

This spring, the saga of Leighton as a Philly Phenom has been building weekly since Brian Boucher went down awkwardly in a collision in Boston during Game 5 of the Flyer’s second round series vs the Bruins. Two weeks later, in the third round vs the Montreal Canadiens, Game 5 saw the Flyers and Michael Leighton winning the Eastern Conference Championship (for the Flyers, a first since 1997) and earning a date with the Blackhawks to battle for the Cup.

Tonight is another Game 5 with Leighton in goal, this one to be played in Chicago on the biggest stage in the game.

Of course, this kind of thing doesn't happen often. Seriously, that's my point. How does this happen? The combination of skill and effort, size and strength, discipline and commitment, patience and optimism, and, it seems, even happenstance go into making the difference between reaching the pinnacle of success in the sport, and merely fading away into anonymity. I am reminded that luck is often a result of being prepared to seize the moment when opportunities present themselves. I say: Good on Michael Leighton.

But what happened to all those teammates of Leights', whose names are listed on the gamesheet from April 25, 2008 in Albany? Given the unexpected turns of Leighton's professional life since that game, I decided to do a little web surfing on his nineteen fellow River Rats, who also lasted through 5 ½ hours of playoff hockey in the 5-OT game in 2008.

First off, you'll enjoy these video highlights from ESPN of the game: VIDEO: Losing goalie makes 98 saves in five-OT AHL playoff game  - ESPN. See how many names you recognize on the Rats jerseys. 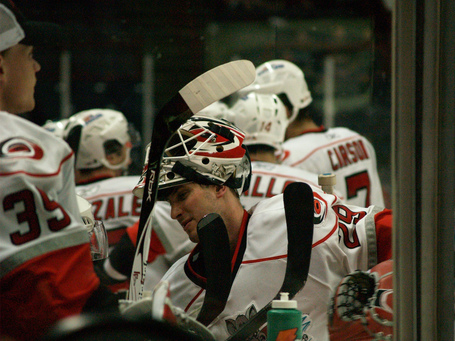 Where are they now?

Here's the rundown on the status of those other nineteen River Rats:

2009-10 River Rats (now the Charlotte Checkers) - 5 players: Mike Angelidis, Jakub Petruzalek, Jerome Samson, Nicolas Blanchard, Brett Bellemore, and Justin Peters. Samson and goalie Peters both saw some time with the NHL club this season. Peters' name is in the conversation, with veteran Manny Legace's, to be Ward's back up next season.

The fifth name in this category is Steve Ward, who spent the last two seasons in the ECHL. Our Charlotte readers can tell you with which team: he's been playing effectively on the blueline right here in North Carolina, with the Checkers. No word on where he goes from here.

One player's name shows up on this roster who played with the ECHL Florida Everblades for the entire 2007-08 season. David Cornacchia was called up just for the post-season. A couple months later, in July 2008, he was tried and convicted in Florida for an altercation on an American Airlines flight that occurred in December 2007, and sentenced to one year in prison. With that behind him, he now plays in the Netherlands for the Tillburg Trappers.

The only name not accounted for: Joe Jensen. He also played 6 games for the Hurricanes in 07-08, and was with the Rats for 32 games in 2008-09. His whereabouts at this time is an online mystery - his career stats on all hockey sites seem to end a year ago. (At the risk of sounding like your high school reunion chairman, if you know where Jensen is now, please share!) [UPDATE from the devoted Albany fans: Jensen suffered a concussion in the bus crash of February 2009, and this past season was spent recovering from the injury.]

I came across a few other players who were with the Rats that year, contributing to the Rats season, even if they didn't play in that April 25th game. Two years later, here are a couple men whose stories help fill out the possibilities and the disappointments.

Noah Babin, the undrafted Notre Dame Defenseman, was sent down from the Rats to the Everblades and, after doing some additional studies through the business school at his alma mater, is now a financial advisor in Palm Beach. He's even on Linkedin.

And remember Brandon Nolan? Like another kid named Brandon on the Rats roster that year, he is also the son of a former NHL player and coach; in this case, Ted Nolan. The 2007-08 season was a breakout year for Nolan, who also saw 6 games up with the Canes in January. In his 48 games with the Rats, he put up a corresponding 48 points, so that in January of 2008, he was featured here at NHL.com. His future seemed bright. Then, as best as I can determine, after he suffered a concussion during a game in February 2008, he has never played professional hockey again. Another example of how an instant can change a life forever. Those "what if..." tag lines on the History-will-be-made ad series could also find some singular moments in hockey that are nothing short of heart breakers.

So imagine these twenty or so guys gathering together at a "Rats 5OT" reunion - maybe at a nice hotel up in Albany this July, with Michael Leighton as the guest of honor, the one who is (at least for now) living the dream. They might recall that strange, historic five-hour game in Albany - barely two years ago - that they all shared. And then, as one does at reunions, they might ask each other about their lives since then, and remark how their careers have scattered in so many directions.

That is the you-can't-make-this-stuff-up plot line of so many professional hockey players which is part of what makes sports so appealing, unpredictable and so engaging. Sometimes it seems unfair, and sometimes richly deserved. The odds are so long, the climb is so hard and yet we watch, inspired, as even the guys who were never on anyone's Top-10 List of Teenagers on Draft Day can rise, somehow, to the NHL's A-list when all is said and done.

It makes me wonder which of the 2010-11 Checkers will have an amazing story that we'll watch with pride and awe when we look back in 2013. You just never know, do you?