Share All sharing options for: Clicks and Clippings: Reflections on Rod Brind`Amour

Yesterday's long-anticipated yet somewhat impromptu new conference was undoubtedly an important moment for everyone of us in Carolina who describes him or herself as a hockey fan. And, from the tributes that emerged around the NHL since 2:30pm yesterday, Rod Brind`Amour and his accomplishments earned great respect and admiration of untold followers across the country.

I have assembled many of these stories here in one place to give us all a chance to once more reflect on exactly how significant and adored this man was after his remarkable 20 years in the National Hockey League:

If you only read one link, this is the one: Carolina Hurricanes captain Rod Brind'Amour retires after 20 NHL seasons - ESPN From Scott Burnside: As Rod Brind'Amour announced his retirement Wednesday, we remember his class, character and Hall of Fame-worthy career.

Brind'Amour opts for retirement - The Globe and Mail

After the jump, what they are saying in Raleigh

Brind`Amour was interviewed by Joe Ovies on 99.9 the Fan, yesterday afternoon. Here's a link.

From the News&Observer, who pulled out all the stops with their coverage:

The Canes' Chief of Media, Mike Sundheim, tweeted first thing this morning: Great work by the N&O this morning on Twitpic: 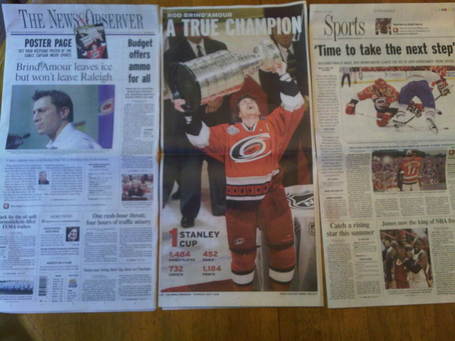 Brind'Amour leaves ice but won't leave Raleigh - Print Edition of NewsObserver.com When Rod Brind'Amour arrived here more than a decade ago, he couldn't wait to leave. Now, all he wants to do is stay.

'Time to take the next step' - NewsObserver.com For many Carolina Hurricanes fans, the lasting image of Rod Brind'Amour will be of him lifting the Stanley Cup in 2006, victorious, his face revealing hard-won satisfaction and sheer ecstasy.

Canes Now - Daniels recalls Brind'Amour's resolve  Jeff Daniels remembers Rod Brind'Amour's first few days with the Canes in January 2000, when he would give Brind'Amour a ride from the hotel to the RBC Center.

Canes Now - Rod Brind'Amour retires, but only as a player Rod Brind'Amour isn't saying goodbye. A goodbye to the NHL and his playing days, yes. But not to the Carolina Hurricanes.

Canes Now - DeCock: The Triangle's trinity of Hurricanes icons With Rod Brind'Amour's retirement today, he takes his place in the Hurricanes' front office alongside the two other icons of the team's decade-plus here, Ron Francis and Glen Wesley.

[UPDATE] And one more: What they're saying - NewsObserver.com Comments on Brind`Amour's announcement from Chad LaRose, Jeff Daniels, Martin Gelinas, and Paul Maurice.

Canes, Brind'Amour at Peace with Decision - Carolina Hurricanes - Blog As the league’s top defensive forward in 2005-06 and 2006-07 and led the team to its first Stanley Cup championship in 2006.

Sweet Tea, Barbecue, and Bodychecks: In honor of the Warchief's 1000th point  From November 2006, but somehow seems relevant even more today. (language is beyond, PG-13); Sticktap to LTD for the referring tweet.