Camp Is A Wrap: The Future Looks Bright

Share All sharing options for: Camp Is A Wrap: The Future Looks Bright

Fans of the Carolina Hurricanes had a chance to glimpse at the future of the franchise these past four days at the Rec Zone and it would be very surprising if any fans left feeling disappointed.

First round draft pick Jeff Skinner was everything as advertised, if not more.  Second rounder Justin Faulk looked solid. Riley Nash, who was acquired from Edmonton via trade, seemed to be ready to move up to the next level.  Justin Shugg looked like an absolute steal as a fourth round pick.

The list goes on and on as each of the prospects had their positive moments in camp.

The Hurricanes staff tutored the prospects about what they needed to do to become professionals, including proper physical training, on ice techniques, and even tips about what they should eat.

It's not everyday these players can get input from a Hall of Famer like Ron Francis.  USA Hockey Hall of Fame member Tom Barrasso also participated, as did Glen Wesley, Rod Brind`Amour, Jeff Daniels, and Paul Strand.

Now it's up to each of the prospects to take what they learned and make it work for them personally.  Looking at past results, only about 19% of all players drafted end up playing in the NHL.  The odds are against these players, but the final verdict is up to each and every one of them.  They each have the tools to make it if they fully apply themselves. 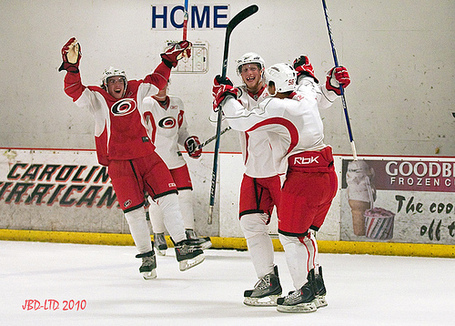 The prospects bonded a bit as camp wore on.  Skinner appeared to step forward as group leader, more so because of his personality than by his standing in the draft.

Paul Branecky got this quote from him on Saturday.

"We’ve got a great bunch of guys here that are all working hard," said Skinner. "When you go through something like this that’s so tough and demanding physically and mentally, it’s good to try to have a bit of a laugh and keep it fun."

The team's first round pick showed a zest for the game and a competitive edge that sets him apart from most players.  Yes, the Canes look like they have a very special athlete in Jeff Skinner, a player who scored more goals in the same league than highly acclaimed and much hyped first overall pick Taylor Hall.

Fans also got their first up close look at Jared Staal, youngest brother of the Staal clan.  "Staal the Younger" is certainly easy to notice on the ice as his imposing figure can't be missed.  I asked Staal if he was surprised about the trade that sent him from Phoenix to Carolina.

"Well, my agent was initially talking to Phoenix regarding a contract and for whatever reason, things really didn't work out", said the 19-year-old. "But the end result of me being traded to Carolina is not a bad thing at all, so I'm very excited about the opportunity and happy to be here."

When asked how camp has been for him, Staal replied, "I have learned a lot but what has impressed me the most is that you get treated very well here.  They really care about their players, which is huge. They pay attention to what you are doing on the ice, off the ice, and everything that it takes to be a pro.  So I'm just soaking in as much as I can."

It will be interesting to see how his development progresses the coming year.

The youngsters now go home for a bit of rest, but many of them will gather together again in September for the Traverse City Tournament, an event the Hurricanes prospects won last season.  Later, we will look at who participated in last year's tournament and who will most likely be selected to attend this year.

But first, fans will be looking for Riley Nash's decision as well as other offseason business that the organization needs to tend to.

Are the Canes done signing defensemen?

(More camp photos by LTD can be found here)