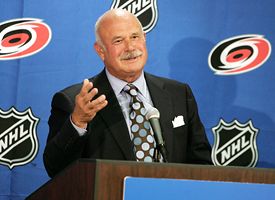 Carolina Hurricanes owner Peter Karmanos is scheduled to hold a press conference at the RBC Plaza at 1:30 Monday afternoon.  Karmanos will reveal the 2011 NHL All Star Game logo and he will discuss other ongoing preparations for the event as well.

Will he give any update about his attempt to sell up to 49% of the franchise or disclose any other important tidbits?

We will be covering the event and will have an "open thread" here starting at 1 p.m. for those who would like to discuss the press conference as well as any other NHL news.  I will be taking video at the Plaza and will provide a report as soon as time permits after the press conference has concluded.

UPDATE:  Mr. Karmanos will be unable to attend.  Jim Rutherford will make the announcement.