Share All sharing options for: Cards Of The Week: Ron Francis - Milestones, Numbered, and High End

A couple of days ago I received an email from Larry, a long time Ron Francis fan who sent me photos of a few of the favorite cards from his collection.  After the jump, check out Larry's favorites along with his notes.

Great blog, I really love it!  I'm a former Hartford Whalers fan, now Hurricanes fan.  My favorite player is Ron Francis and I have well over 100 of his cards.  I enjoy collecting rare or unusual cards the most and I'm sending you a few of my favorites of "The Franchise" that the blog's readers might enjoy. 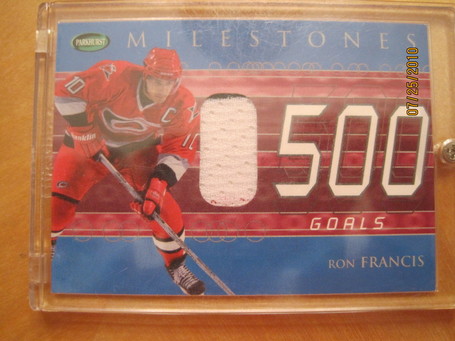 The first card is a 2001-02 Be a Player, Parkhurst Milestones Jersey card with a piece of game used jersey worn by Francis.  He scored his 500th career goal on January 2, 2002 and this is a great way to remember it. 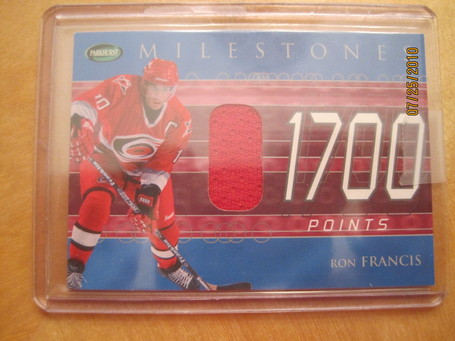 Francis had 1798 points in his career, good for 4th highest in NHL history.  This card is also from the 2001-02 Be a Player, Parkhurst Milestones jersey collection.  He also scored his 1700th point during the 2002 season.  Just 2 more points and he could have had a cool 1800 point card! 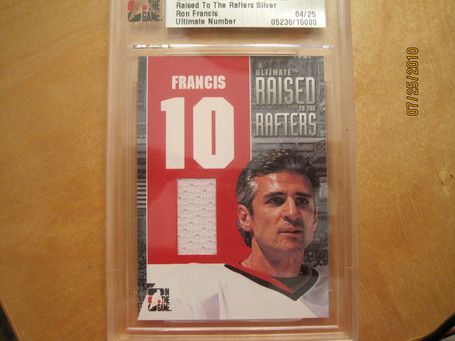 The Carolina Hurricanes retired his jersey and raised it to the rafters on January 6th, 2006 and this card commemorates that night.  This is a 2006-07 In the Game Ultimate Memorabilia card and there are only 25 copies of it made. 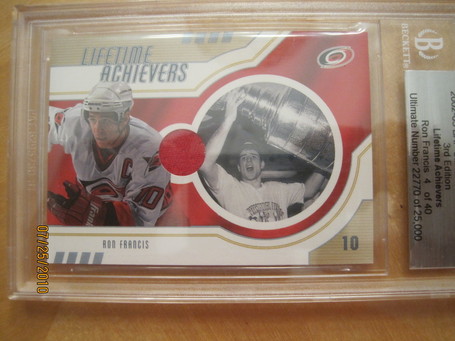 This is a 2002-03 BAP Ultimate Lifetime Achievers card with a small piece of game worn jersey.  There are only 40 copies of this card made.  There is a listing of Ron's many awards and achievements on the back. 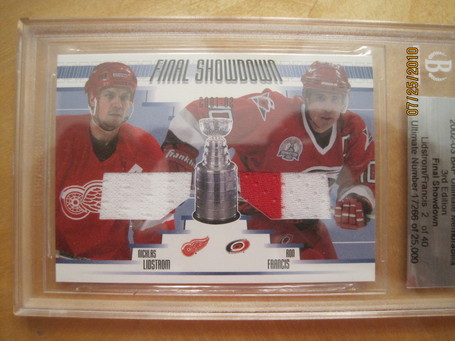 This is another card which brings back memories when I look at it.  It's a 2002-03 BAP Ultimate Final Showdown card with pieces of jerseys worn by Nicklas Lidstrom and Francis.  That was a great series even though the Canes lost in 5 games. 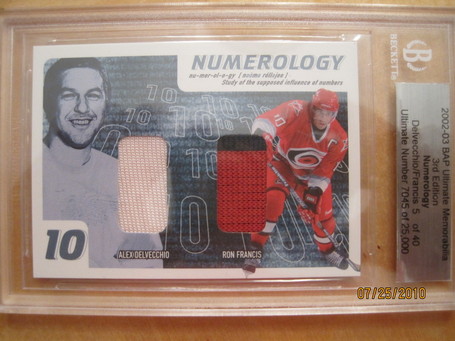 This card is called a Numerology jersey card and it was also included in the BAP Ultimate series in 2002-03.  It has pieces of game worn jersey by both Francis and Alex Delvecchio.  Delvecchio played for the Red Wings from 1952 to 1974 and also wore number 10, just like Francis did for the Whalers and Canes.  The Wings retired his number as well.  Both players won the Lady Byng Award three times. 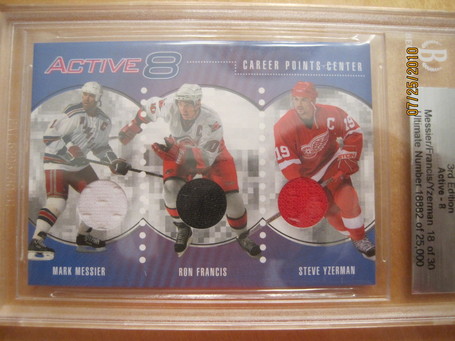 This last card is my pride and joy and has small pieces of game worn jerseys from Francis, Steve Yzerman, and Mark Messier.  At the time, these guys had some of the highest stats of all active players.  This is also from the 2002-03 BAP Ultimate series and only 30 copies were made.

Caniacs who collect memorabilia are lucky that someone like Francis played for the team and is still in the organization.  I have had a lot of fun collecting cards of my favorite player over the years.

Wow, those are sweet cards.  I must admit, I like that last card myself.  Thank you very much for sharing Larry!