Clicks and Clippings: Who are these guys? The Rest of the Prospects

Share All sharing options for: Clicks and Clippings: Who are these guys? The Rest of the Prospects

Last week, we took a look at the eleven new names added to the Hurricanes depth charts during the 2010 NHL Entry Draft weekend in Los Angeles. With the arrival this afternoon in Raleigh of six additional players to attend their first Hurricanes' Conditioning Camp for the next several days, here is a look at these new faces making their debuts on North Carolina ice.

Tomorrow morning, we'll be posting Canes Country's Guide to the Camp which will include a printable .pdf sheet you can take with you as we all try to put names, faces and hockey skills together at the RecZone. As a reminder, the on-ice drills will be Wednesday through Saturday, 4:45 to 5:45 PM and are open to the public.

After the jump we'll look at these six: Kyle Lawson, Michal Jordan, Cedric McNicoll, Jared Staal, Tommi Kivisto, and Rasmus Rissanen. I've also got some new links on the eleven we looked at last week.

(Listing the players from oldest to youngest. ) 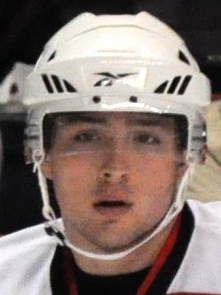 (Thanks to sandpiper for the use of her photos)

Lawson, a Michigan native, played four years at Notre Dame University and joined the Albany River Rats only this spring. He served as Alternate Captain for Team USA's U-20 team, winning bronze at the 2007 IIHF World Juniors tournament in Sweden, on a team with Jamie McBain. His sophomore year of college, he contributed to the Fighting Irish team that upset Michigan in the semi's (see video below) to reach the NCAA finals in 2008, losing 4-1 to Boston College. He played 10 games with the Albany River Rats during the regular season and registered 1 assist and no PIM. His plus/minus was -1 in that span.

Here's the write-up of his accomplishments from South Bend, posted when he signed with the Canes. Irish Defenseman Kyle Lawson Signs With Carolina Hurricanes - University of Notre Dame Official Athletics Site A three-time CCHA defenseman of the week during the 2009-10 season, Lawson finished his Notre Dame career playing in 161 games with 17 goals and 73 assists for 90 points. He had 10 power-play goals, two short-handed goals and five game winners while turning in a +41. The talented blueliner closed his Irish career tied for third in games played (161) and is ranked eighth among all Notre Dame defensemen with 90 points.

At the best of all sites to study up on NHL prospects, Hockey's Future, our own Cory Lavalette covers those in the Hurricanes system. Here's what he had to say this spring. Prospect Kyle Lawson Player Profile - Hockey's Future

Finally, from highlights of "Great Defensive Plays" in NCAA hockey:

Acquired in trade with Colorado (part of Stephane Yelle deal)

McNicoll had a full and successful career with Shawinigan Cataractes of the QJMHL, garnering numerous trophies and honors. According to the Canes announcement with the trade:

McNicoll had "a strong 104-point overage year at Shawinigan of the Quebec Major Junior league and drew the attention of Colorado, who saw playmaking potential in the 5-foot-10, 176 pound center."

McNicoll played 7 games with the Albany River Rats this spring, scoring 2 goals in that time. According to Hockey's Future, he is excellent at the draw, though small for a NHL centerman. Here are a couple images from Albany, with thanks once again to sandpiper. 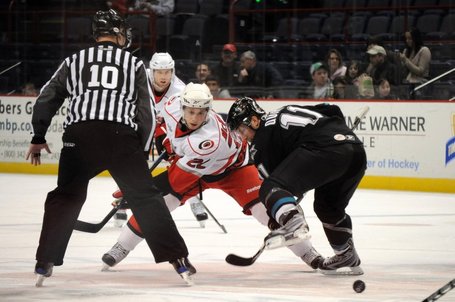 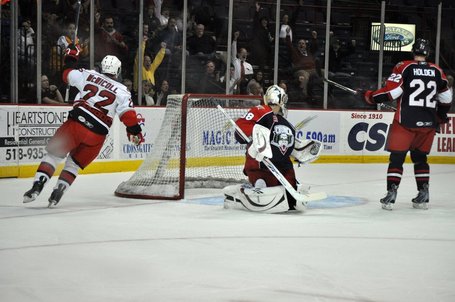 A native of the Czech Republic, Jordan has been playing in the OHL, for the Peter Karmanos-owned Plymouth Whalers in Michigan for 3 years. [Link to photo] Upon the completion of their playoff season (on a roster with 2010 Draft headliner Tyler Seguin and the Hurricane's 3rd round pick this year Austin Levi), he signed a three year contract with the Canes.

Jordan served as Captain for his country's team in the IIHF World Juniors tournament this past winter in Saskatchewan. 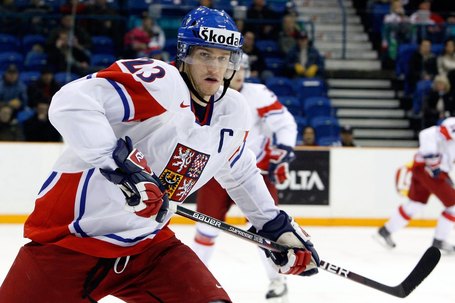 Here's an excerpt from a great interview with Jordan his home club posted earlier this year: Breaking the Ice with...#32 Michal Jordan recalling his first goal on one of the Washington Capitals hot goalie prospects, who won this year's AHL Calder Trophy with the Hershey Bears:

On his most memorable goal… "I would go with my first OHL goal (9/29/07). It wasn’t with Plymouth, I was still with Windsor, but it is my most memorable goal and I actually scored it against Plymouth. We were in their zone, they passed it to me on the blue line and I took a one timer and scored top cheese on Michal Neuvirth."

Jordan was also on the wrong side of an ugly hit from Michael Halmo in December of this past season. [Video link] Halmo later received a five-game suspension, as the incident received added attention coming soon after Zach Kassian's hit on our own Matt Kennedy (then in Kitchener) and the Patrice Cormier hit as well.

Last, Hockey's Future has this to say. Prospect Michal Jordan Player Profile: Jordan has decent size and the potential to be a solid two-way defenseman down the road.

Acquired in trade with Phoenix,

While his last name makes J-Staal easily the most "famous" of the prospects attending camp this week, it is actually difficult to find much written about his OHL junior career with the Sudbury (Ontario) Wolves.

Beyond his official page with the Wolves where he answers the standard-form questions like:

Does your family have a hockey background? Dad played CIS and Eric, Marc and Jordan all play in the NHL

and learn his favorite player is Joe Thornton and he likes "Family Guy", highlights of the incident [video] that earned Staal a five-game suspension for "bullying" Alexander Burmistrov are about all that's out there - at least from what I could uncover.

Here is one promotional video from Nike Bauer Hockey, shot a couple years ago where the Staal family sits around the kitchen table in Thunder Bay for some rather awkwardly staged puck-talk. For example, when asked which of his three NHL brothers is scariest on the break-away, at about :35 mark, Canes fans may be disappointed to hear that Jared does not choose "Eric". Poor kid, I got to wishing someone would write about his hockey game and not dwell on his memories of playing with his elder and more accomplished brothers.

Here's more from his decision to leave North American hockey: The Red Deer Scene: KIVISTO HEADED TO FINLAND with these comments from the team's owner, Brent Sutter, upon learning Kivisto had decided to return to Finland after just one year in Canada:

Its disappointing and it's a situation that occurs with these European players. The chance you take on taking them. The disappointing fact for me is that when you bring a player over at 17 years of age and they think they're going to be stars in the league right away and that's not usually the case.

According to Hockey's Future:

Kivisto is an offensive capable blueliner with a powerful shot so it's alarming that he was able to score just once in 65 games. He skates well, can make good passes and is satisfactory in his own end but the knock on him is his decision making - he's a guy who coughs up the puck a lot under pressure.

Since most of this analysis is based on his play while still in North America, this morning I asked our twitter friend from Finland, hockey journalist Juha Hiitela (@jhiitala) what he could tell us about Kivisto's year in Helsinki. According to his observations, Kivisto, (I've filled out the twitter shorthand)

played pretty well in the end of the season, and got more time on ice (TOI), including for the penalty kill. He was kind of a scorer when he was younger, but seems now like a stay at home Defenseman...[He] said at some point (probably post season) that he knew the Canes scouts had been watching him, also after the Entry Draft, but he hasn't got any contact....The Jokerit coach (who was also Team Finland's U20 coach last season) praised him a few times during the season for playing more mature than his age.

When I asked him if he had any sense of Kivisto's plans to return to North America and how he would describe Kivisto's chances to make it in the NHL, he replied, "He played one season in WHL, didn't like, so probably will stay in Finland. NHL? Long shot."

Kivisto was selected to play on Team Finland's U-20 team at the World Juniors this past winter and put up these stats with Jokerit this season: In 22 games, 0G - 2A - 2P with 12 PIM.

The Silvertips are lucky to be pretty closely followed in their local paper's hockey blogs. Here's their writer's evaluation of the team's past season, where the defense became the team's strongest suit.  HeraldNet: SILVERTIPS PLAYOFF PREVIEW: Position breakdown

Everett rebuilt its defense during the 09 offseason and the final results were impressive. The additions of Radko Gudas, Rasmus Rissanen and Ryan Murray transformed defense from a weakness into a strength, and as a result Everett allowed the fewest goals in the league (175) during the regular season.

And again, turning to Hockey's Future:

Rissanen is not as flashy or skilled as some of the young Finnish defensemen but has the size that many of them lack and also likes to play a physical style of play.

Last, I was able to find some video. From the Silvertips Official Site, this is about 8 minutes long as it introduces you in a very light-hearted way to most of the teams' players. You do get a sense not only of Rissanen's personality but how much fun they had as a group this season.

And of course, those fight videos are always up on youtube. This is a take-down worth seeing:

Loose ends and other updates:

Since last week several new posts have gone up about the new players acquired at the draft that we looked at last week. Thanks to many of you for linking us to these either in comments of fan posts.

Jeff Skinner: Canes Now - Kitchener coach on Skinner: 'This kid loves to play' "When Skinner has the puck, other teams get nervous. They know something is going to happen. He's dangerous anywhere inside the blue line but it's when he scores and where he scores that, to me, separates him as an elite player. He isn't afraid to go into the dark areas."

Riley Nash: This story looks at Nash's choice between returning for his final year at Cornell or signing a pro contract with the Hurricanes this summer. Nash has Carolina and Cornell on his mind | Kamloops Daily News: Riley Nash has spent three years at an Ivy League university. He has said "thanks, but no thanks" to one NHL team. His NHL rights were traded on Saturday. He is faced with making a rather large decision this summer.

Danny Biega: Hurricanes Select Danny Biega with 67th Pick | The Harvard Crimson On Biega's thoughts as to when to leave college and go pro: "Definitely all options are being considered right now," Biega told the media following his selection. "Whether that be leave [Harvard] after next year or finish up. It's also possible to graduate in three years or two and a half years. You can always come back in summers too to finish up so why not get the best of both worlds?"

Mark Alt: according to @ice_chip, the twitter feed for the N&O's Chip Alexander, recent draft pick Defenseman Mark Alt from Minnesota is excused with good cause from this week's Conditioning Camp:

Second-round draft pick Mark Alt not attending rookie camp because he's taking summer academic courses, Rutherford said."He could not get out of them. It's a legitimate reason," Rutherford said of Alt.

Finally, if you want to review the first two parts of this series on the new Canes in town, here are last week's posts: