Share All sharing options for: Just Another Day in Paradise: Conditioning Camp Opens

Raleigh, N.C.  The Carolina Hurricanes opened their prospect conditioning camp on Wednesday and the attendees were greeted with local temperatures reaching over 100 degrees.  Welcome to North Carolina!

"Good thing we didn't have to work-out outside," grinned first round draft pick, Jeff Skinner.

The seventh overall selection in last month's draft did not disappoint the several spectators who came to watch the prospects skate at the Rec Zone during the on-ice portion of training.  He showed off a few nifty moves, scored a couple of slick goals, and at one point skated right over one unsuspecting defenseman, leaving him flat on the ice in his wake.

Some fans are drooling over the notion that the high scoring Kitchener center might someday skate on the same line with All Star center Eric Staal.  I asked Skinner if he was strictly a center.

"I played center most of the last season," he said.  "But I played wing a few times, like at the prospect game and stuff like that.  I played wing half the time in my first year.  I don't mind it, I prefer center, but I can play either or." 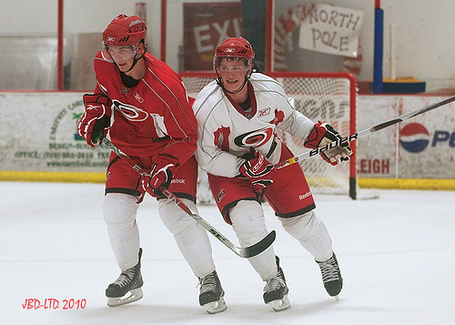 (Jeff Skinner, (in white) mixing it up during drills)

Skinner wore number 53 at Kitchener and requested the same number at camp.  Since it is a bit of an unusual number, I had to ask him about that.

"I used to wear 23 growing up, but it was taken when I first got to Kitchener.  My family wanted me to keep the three, and the five is similar to a two, like maybe an upside down two, so 53 worked out well and it's kind of stuck."

Maybe some season he will have 53 goals to match his number? 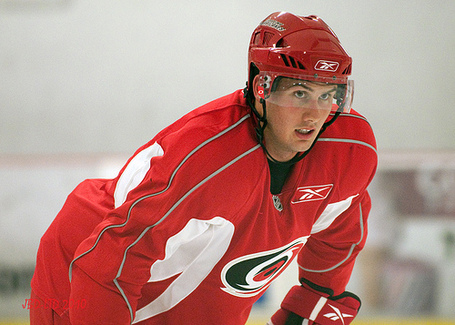 As with past conditioning camps, the youngsters looked beat when they got to the dressing room after skating for 60 minutes during the on-ice portion of their training.  Of course, head trainer Pete Friesen had already put them through their paces earlier in the day.

Third round pick Danny Biega is known for his physical conditioning and tested among the best of all athletes during the draft combine in Toronto.  I asked him how the day went and how he felt about the training.

"You know, despite the good shape I think I'm in, today was still a pretty big grind.  It was a long day and pretty tiring.  I kind of expected that a conditioning camp would be hard, but it's exceeded expectations.  It's been very hard.  I just have to get some rest and come back tomorrow."

This was the Montreal native's first trip to North Carolina and he was amazed by the heat.  "You just step outside, and you break into a sweat, it's amazing," he said.  But he's looking forward to seeing more and learning about the area.  "So far it's been great!" 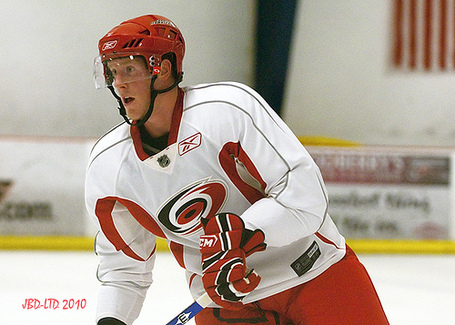 (Riley Nash during a drill)

One prospect has a huge decision coming up soon.

Riley Nash needs to decide whether he wants to return to Cornell and finish his career there or sign a professional contract with the Hurricanes and try to make the team during this fall's training camp.

One way or the other, he told me he would not keep people guessing for much longer.

"I'm here to see what it's like and take in the full experience," he said.  "Then I'm going to go home and decide pretty soon after that, so I don't have to keep people waiting, I know they are probably sick of this already."  He smiled, "I swear I'm not doing this on purpose, I just want to make the right decision."

When asked about the trade in which the Oilers sent him to Carolina for a second round draft pick, Nash said he kind of saw it coming.

"To be honest, I wasn't all that surprised I got traded.  But I was kind of surprised it was to Carolina.  I heard a few teams that were interested, but not Carolina.  Although, in the end I guess I should have been aware of it because Mr. Francis has spent a lot of time in Cornell scouting another player you guys drafted a couple of years ago.  And his daughter goes there, so he's seen me play a lot."

I asked Nash to give me a breakdown of how the day went.

"We had a tough day today.  We got up at about six, had some breakfast, then went over a bunch of medical clearance things.  Then we had our physical testing done at the APC Center.  And that wasn't too easy," he said while chuckling.

"They put us through our paces, but it was good.  You really learn a lot.  Those guys bring a lot of different things to the table that you aren't used to, but that's what I'm here for, to learn as much as possible."  He explained further.  "They test you at different things to see what you are weak at, then we will kind of build on that tomorrow.  Then you can work on the areas you need to most work on. "

"Then we had some lunch and attended a seminar and we came here after doing a half an hour of stairs."

Half an hour of stairs?

The boys will carry on with camp three more days, Thursday, Friday, and Saturday.  We will be watching.

(all photos by LTD.  Check out the folder at this link.)