Raleigh, N.C.  Carolina Hurricanes goalie Cam Ward joined the prospects for the second day of on-ice training, but at least one of the young guns was not necessarily star struck.  Windsor forward Justin Shugg lit up Ward and scored on his first three shots, the last one ringing the pipes as it went in.

Of course Ward has not played in awhile and was rusty, but the Canes' fourth round pick showed the form which helped him score 30 goals last season for the Memorial Cup Champs.

After the on-ice session was over, I asked Shugg what his goals were for next season.

"I'd like to improve my numbers and be a leader on the hockey team.  I was told I would be counted on to be a leader and would be alternate captain.  There will be a lot of new guys coming into Windsor and I look forward to helping out and being a good leader."

Ex-Windsor coach, Bob Boughner recently accepted a job as assistant coach in Colorado, so Windsor assistant Bob Jones will take over next year.

Boughner is known as a no-nonsense guy.  I asked Shugg what it was like to play for the one time Carolina defenseman.

"He's a very serious guy.  He played defense for a lot of years in the NHL and his attitude is defense first.  I believe that when I came into Windsor, that's what they taught me, defense first and that's helped to develop my game."

Defense first, and he still scores 30 goals in a season?  Impressive. 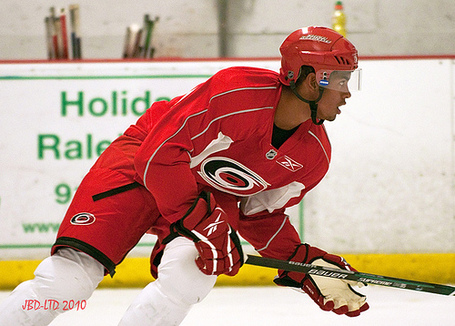 Another impressive youngster in camp has been third round pick Austin Levi, who has shown good mobility and skating ability for having a big, (6'3) frame.  Levi told me what camp has been like for him so far.

"It's been tough.  It's a very good orientation, to get to know about the organization and the inner workings and things like that.  The week is all about teaching, nutrition, training, everything that it takes to make it to the NHL.   It's a lot of information to take in and it's been very tough, especially the workouts."

The hardest parts of the workouts?

"The stair workouts are the worst.  Today we also did five miles on the bike which was also very hard.  These are tests to see where we are and what we need to work on in order to get to the next level."

This is the first time Levi has been to North Carolina, but hopefully it won't be his last.  He loves it so far.

"It's hot!  And I'm not too used to that.  But, it's nice here and I'm enjoying it a lot.  I really like this organization, I like everything about it.  I'm really excited to be here."

Next up, I asked the defenseman what his goals were for next year and what he needed to work on the most.

"I would like to expand what I do next year.  I think I can jump up more on offense than what I show and I really need to tune into my potential there.  So that's something that I will work on, not only for next season, but the seasons beyond.  It's something I need to improve on, but yet, still keep my defensive game."

(All pictures by LTD.  More photos of day two can be found here.)