HM’s Fishtank: The Year in Review plus "Introducing Skinnerfish"

Share All sharing options for: HM’s Fishtank: The Year in Review plus "Introducing Skinnerfish"

First, I'd like to give you all a big hockeymom shout out for helping my family make the right choice with our fish called Babchuk a year ago. In fact, the option that the majority of you voted for:

"Retain him "as is", and let nature take its course. This is for the hockey gods to decide"

turned out to be exactly the right call. Babchukfish thrived all year, oblivious to the controversy associated with his presence. Then, as we all know, the choice was validated July 1st ,and Anton Babchuk has returned to the Hurricanes fold. Crisis averted.

There was an entry in the Canes Country Urban Dictionary posted over the weekend that defined "HM’s fishtank". I realize we have many new friends here at the blog who may not have been around when I first introduced you to my family’s Hurricanes-themed fishtank over a year ago. While you can catch up on all the details at this link, here’s an excerpt which will give you the gist.

[Our tropical fishtank] apparently has a supernatural connection to the goings-on within the Canes organization. Almost every trade or injury (or firing in the case of Peter Laviolette) has been anticipated by the life cycle of the appropriately named fish in our tank. Justin Williams, Erik Cole, Lavi, Rod Brind`Amour 's season-ending injury in 2008 (actually our Brindy-fish has died twice - we've retired his name - hint, hint), Tuomo Ruutu's lower body injury vs the Penguins- all happened first in our tank. Even our moss-ball jumbotron failed and sank to the bottom the day before they dropped the old one at the RBC.

With this ongoing saga unfolding everyday in our bonus room, I thought I’d catch you up with the last year's events and ask you for some guidance on what we should do for the upcoming season. The story and the fish are after the jump - you'll want to read the backstory prior to casting your vote.

This past year's close observation of the family fishtank proved to be typically insightful, though, like all intruments of clairvoyance, some items, in hindsight, we clearly misread. For instance, when "Big Pete" Karmanos, the Golden Chinese Algae Eater, died unexpectedly at a ripe old age of 40 months back on September 4th, it in fact meant nothing. What's more, it turns out my Balsillie-fish conspiracy theory was simply a red herring.

Much more significant were the problems experienced with tank chemistry, the acidic pH, and cloudy water from September through November. These indicators were remarkably prescient to the stinker of a first-half we endured in the Caniac Nation. There was no quick fix, and the tank had to overcome the problem from within, gradually, organically. Our family just had to be patient and watch helplessly from the stands sofa till the water finally returned to the proper balance and cleared so that the fish could find their way again.

Regarding the individual players there were a few telling developments.

While cg's selection was based primarily on his unique appearance, I'm thinking perhaps the reference to Sutter's hockey bloodlines in the name works too. After the deal, caniacgirl had this to say:

"Sutterfish is a top notch fishtank prospect with excellent acceleration and swimming ability. His extraordinary lineage ensures that he will approach the game in a very mature (and coachlike) way."

Young Sutterfish has proved to be very energetic and hungry to grow. We see him swimming strongly in all zones of water and continue to believe the sky's the limit for this fish. Just kidding - he'll pretty much top out at the water's surface.

Off season adjustments and tank deaths

Joe Corvofish died in June. Actually, he disappeared without a trace and we assumed the worst – but you know what they say about assuming – so I guess it’s on me for taking his disappearance as a sign he was not coming back to the club. Again, hindsight being what it is, we clearly missed that read. 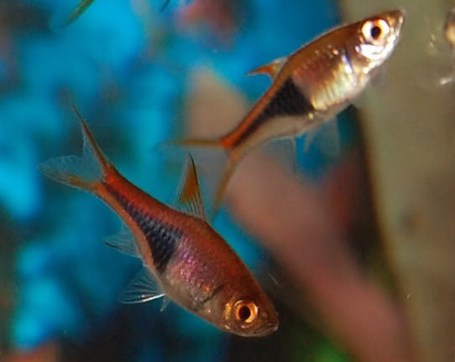 In mid-July, after Matt Cullen signed with the Wild, Cullenfish was found dead and partially eaten (he was subsequently flushed without ceremony), saving us a repeat of the what is now referred to as the "Babchuk conumdrum" (when a fish overstays his namesake). Chad "Rosey" LaRosefish (who, as Cullen’s twin, is a harlequin rasbora – the pair is shown above, swimming over to the bubbler in December) now seems to have become more friendly with the other two rasboras, the scissor-tails, Ruufish and Jussi Jokinenfish. This species has attractive tail finns, as you can see in the image of Ruufish below. We distinguish him from Jussifish because of his irrepressible smile and remarkably well-developed pectoral finns. 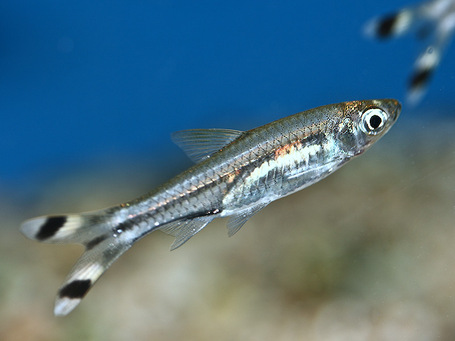 To begin with I feel like I should tell you: I'm worried about the Eric/ks. They tend to isolate themselves near the gravel (deep in the offensive zone) and haven't really mixed with the others, except maybe Mo and Stormy. They've aged and haven't nearly the zest of the others. Just sayin'. Maybe it's only because it's summer and what's the point? Let's hope that's all it is.

Back on Saturday morning, June 26th, my children and I arrived at Petco (at Southsquare in Durham), intent on securing the Hurricanes' newest addition for our fishtank: Skinner-fish. While there, we impulsively decided to also adopt our first Bubbafish.

Sad to say, but Bubba, a young Chinese algae-eater, perished within a week of his arrival. He was really too small I think. Usually when a newcomer dies that quickly, we assume it was our mistake, and the fish was simply not compatible. So, Bob, I'm like 80% confident you have nothing to worry about. Except, umm, you might want to watch your line of questioning in the dressing room during camp: we're pretty sure Skinner ate him.

With all this, here's the current tank roster (16 total):

...introducing, from the Kitchener Rangers, our sixth and final forwardfish in the tank, please give a big Canes Country welcome to Jeff Skinnerfish, our Red-eyed Tetra. 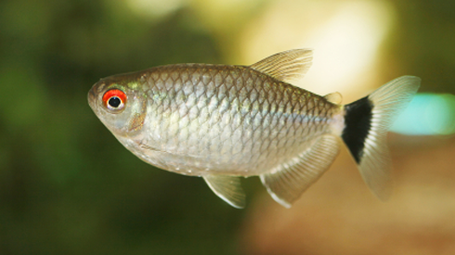 Remember this was in the afterglow of hearing Ron Francis call Skinner's name as the Hurricanes' first round selection at the Staples Center in LA. Francis' words came immediately following the TSN feature introducing Skinner, the former "Canadian bronze medal figure skater" as a pre-teen. We really didn't have much to go on. We had spent days contemplating our choice for a Nino-fish. We were not adequately prepared; surely you can relate? For this lack of good information, the Lady Gaga/Johnny Weir/Pokerface references [video] were at the forefront still. And I'm sure you have already noticed, this red-eyed tetra has a mask that really gets your attention. [Compare photos].

But there are many fish in the sea at Petco with a pretty face. What really won us over are those remarkably glittering silver scales along the sides, the pattern larger-than-life and so sparkly, providing just the razzle-dazzle we were looking for. [Another image] The finishing touch: a black band on the tail, there to remind us this fish can jump.

While it may be premature to say we've found ourselves the next Crosbyfish, this is what I've observed so far: He is aggressive and hungry, though seems to fit in well with his peers, who give him room to maneuver. He has grown tremendously over the summer - I suspect, in whatever the fish-weight ratio might be, he is indeed 10 pounds heavier than Sutterfish. He looks good. I'm cautiously optimistic that he'll be a valued addition to our tank for a long time.

Hockeymom is hoping this early introduction to the tank, hangin' with Sutter, Boychuk, the Finns, and the D-corps will be a great thing for young Skinnerfish and his dazzling moves. Mo - who generally hangs out in the army tank with the Zamboni now that Big Pete is gone, seems interested too. Only time will tell if this is a good fit, and I promise to keep you apprised as conditions warrant.

At last, the hockeymom family again seeks the counsel of the Canes Country membership. We would like to add one fish for the new season. We've witnessed the repercussions of a bad choice (again, really sorry about the bamboo shrimp),, and we want to make sure we find exactly the right roster addition, especially given the implicit constraints of our small-market 20-gallon tank. Not like we can just go all Burkie and make wild trades without regard for budget or appearances.