Share All sharing options for: Friesen 5k Fun Run: In Stories and Photos 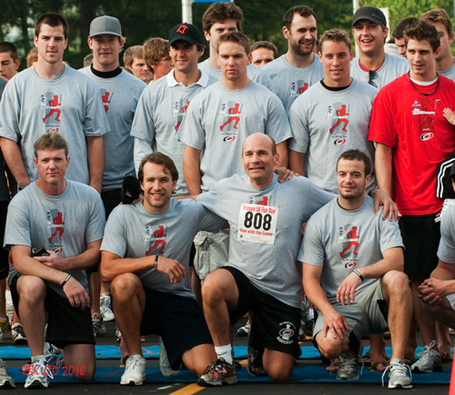 Pete Friesen and friends gather for the start of the 5k Fun Run September 12, 2010 (author's photo).

It's always fun to spend time mingling with Hurricanes players, staff, and fans, but it's even more special when it's for a great cause.

In the summer of 2006, Hurricanes strength and conditioning coach Pete Friesen wanted to share his day with the Stanley Cup with as many friends and Canes fans as possible, and do so in a meaningful way that would support a mission of health and fitness and give something back to the community. From that thought was born the Friesen 5k Fun Run, which entered its fifth year with the event held this past Sunday, September 12th. To honor the heroic struggles of team friend Julia Rowe (a young leukemia patient and source of inspiration during the Cup season), the Fun Run benefits the Leukemia & Lymphoma Society of Eastern North Carolina, and has surpassed $125,000 in fundraising for research and services for local patients and support groups.

This was my third year attending. I didn't run or walk, my husband and son made the loop but I stayed back to take in all of the other activities surrounding the race. A common misconception about the Friesen 5k is that you have to be a runner to participate, which kept me away from the event for the first few years. You don't. It's a great race for hard core runners and this year was the second year an official race timing service was offered. But you can run, walk, take a short loop around the RBC Center and avoid the full course, or you can just come hang out and eat pancakes and have fun. But as long as you're going to be there anyway, you might as well pay the small registration fee which allows you to donate to a worthy cause and have a chance for some truly excellent raffle prizes from race sponsors.

The event features a 5k course that weaves in and around the RBC Center and Carter-Finley Stadium complex. Runners and walkers all start at the same time and location.   There is a turn-off for participants who want to walk a quick 1k short loop and return to the start/finish line to watch other participants as they cross.  Once the Fun Run completes there are two kids' races, a 100-year and 200-yard dash, and afterwards winners are announced and prizes are raffled off to registered participants.  Raleigh band Ariel Down provided entertainment before and during the race activities.

For the Canes organization, it's a kickoff to training camp and always well-attended by the players and coaching staff, and this year was no exception, the stage was packed. In attendance were*:

No Hurricanes players ran in the race this year, but most stayed after the race introductions and many stayed through the entire event including the awards and prize presentations afterwards. Several players also participated in the kids' races, and for those of us milling around during and after the race, they were accessible for photos and autographs when they weren't amusing us with their shenaniganizing.

(*Edit 9/14/10: I had some information wrong regarding who stayed and for how long so I edited the list, and also worthy of an addition was Anton Babchuk, who was not introduced pre-race but was available to the fans during the event.)

I would be remiss if I didn't add a big round of Caniac applause for special guest Mike Commodore, former Hurricane now with the Columbus Blue Jackets and a perennial fan-favorite, for not only coming to town but for actually running the race. He received a huge cheer from the crowd.

Most of the coaching staff is still in Traverse City but Tom Rowe ran in the race and was joined by many other members of the Canes hockey operations staff.

Here are a few photos from the event, more are available in my Friesen 5k album. Enjoy, and I hope to see you there next year! 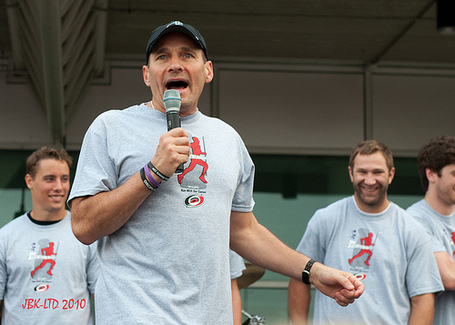 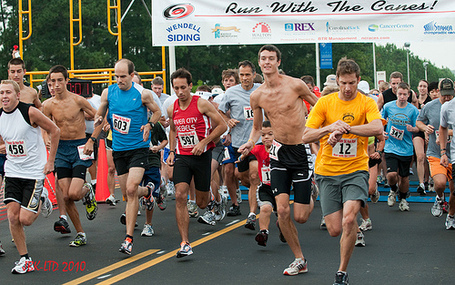 And they're off.  Weather this year was cooperative for the runners, overcast for the start, sunnier but still mild as the race wrapped up. 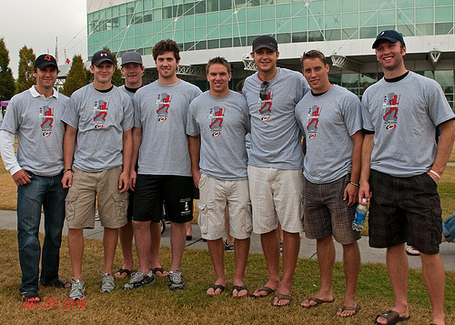 Quick quiz - how many of these young Hurricanes players and roster hopefuls can you name? Answers below. 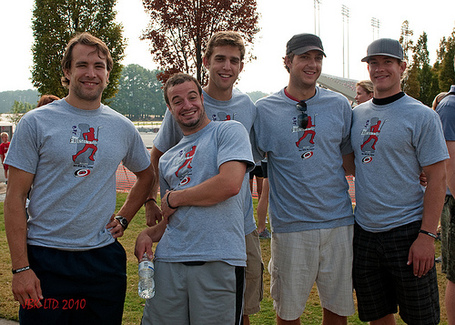 Yep, shenaniganizing.  The phoblographer is trying to take a serious picture, and these grown men have decided that they need to start tickling each other. 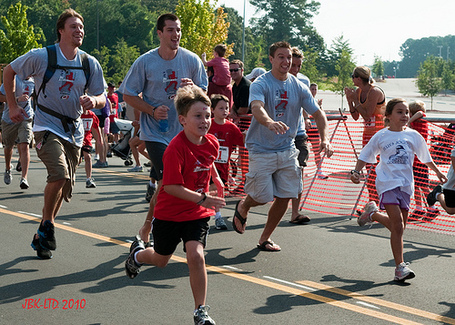 200-yard dash, fun for kids, and also for hockey players who like to act like kids.  Note:  Justin Pogge is running with a backpack.  Now, I don't know if said backpack is something he had to carry as part of a rookie initiation or if he was making a fashion statement, but it was with him at all times and was the source of much humor and teasing from John Forslund throughout the day. 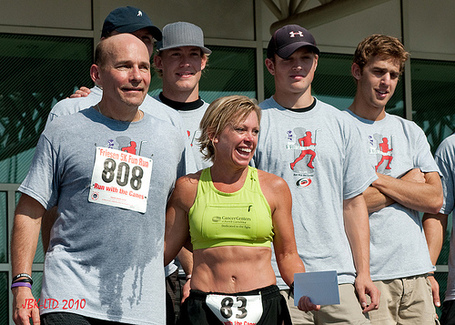 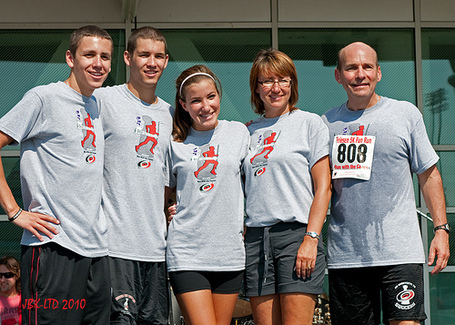 It's a family affair... The entire Friesen family works hard to coordinate the event and are active participants in all of the activities.  Kudos to them for another fine job with this year's 5k Fun Run!