Traverse City Updates: Game 3 at 6:30pm as the Hurricanes take on the kids from Columbus

Share All sharing options for: Traverse City Updates: Game 3 at 6:30pm as the Hurricanes take on the kids from Columbus

The young Hurricanes will play their final game of the preliminary round in Traverse City this evening as they take on the prospects of the Columbus Blue Jackets. The Jackets are winless in their games against the Rangers and Wild, while the Hurricanes have scored all of two goals TOTAL, in two outings against the same teams, emerging with a record of 1 win and 1 loss. The Wild sit atop the standings of the "Gretzky Division" having won their first two, with a strong showing against Columbus in their 5-1 win Sunday.

In order to win their division and a return trip to the championship game Wednesday, the Hurricanes need to win big over Columbus and have the Rangers win handily over the Wild. After win/loss records and head-to-head results, the next tie-breaker is goal differential. I'll chart it out for you after the jump, and I have a few links to keep you up on puck-related activities up there and back in Carolina.

First, the Canes just posted a story (with a couple great photos) talking with Jim Rutherford about who he likes among those in action in Traverse City. Dalpe, Murphy Among Traverse City Standouts - Tracking the Storm Blog Carolina Hurricanes Zac Dalpe, Mike Murphy, Riley Nash and Jeff Skinner have been among the standouts at the Traverse City prospects tournament

However, Dalpe has risen to the top.

"He’s been our best player," said Rutherford of the 2008 second-round pick. "He’s had the best chance to prepare by playing some games with Albany at the end of last season and in the playoffs, but his size, skating ability and shot really stand out."

All the stats, game sheets and schedule details are compiled over at Pointstreak.com, where they should also have a live gamesheet tonight

As we wrote Friday, the tournament format divided the eight participating teams into two divisions of four teams each.  After the preliminary round-robin portion, the top team in each divison will play Wednesday for the first place trophy. The two second place teams will play for 3rd and 4th place, and so on. Last year the Canes won their division and beat the Wild's prospects in the finals. If they want to repeat, both of today's games in their division will need to work out just right.

Here's a table to visualize what is required to make it to the Championship game:

Reviewing the best case scenario: Minnesota loses to the Rangers and the Canes beat the Jackets, so three teams are tied with 2 wins and 1 loss. Then the goal differential of those games needs to be sufficient to put the Canes at the top. In other words, Murphy needs to continue to be a wall, and we need to see some goals out of our talented young forwards Zac Dalpe, Jeff Skinner, Justin Shugg and Riley Nash. (Thanks to Dave, one of the PA announcers at Traverse City, who's blogging here for the explanation.)

Here's the Hurricane's roster once more, indicating the five returning players in pink and try-outs in gray:

While many of us went into this tournament expecting to see just how good Jeff Skinner would be on this larger stage (at least he's among the leaders for shots taken), it's goalie Mike Murphy who has been the MVP for the Hurricanes thus far. Only two goalies have played two games (Murphy and Detroit Red Wings' Jordan Pearce) and Murphy is at the top of the heap with a GAA of 1.00 and save percentage at .964. I'm thinking this boy intends to win the tournament for the second time in two years, and put Justin Peters (and the rest of the organization) on notice that the battle isn't over for the Canes back-up to Cam Ward in the years to come.

The Blue Jackets have a young team, and according to one avid fan who made the trip from Columbus @en4cer45 (aka Jas Chaffin), they have only four professional games in total among the 22 Jackets' prospects there. Their biggest name is Ryan Johansen, selected fourth overall at he draft in LA last June. He is a Portland Winterhawks product, and Canes WHL Defensemen Rasmus Rissanen and Tyler Stahl may have some insight to share. At the other end of the ice, first round pick John Moore is a  Kitchener teammate of Jeff Skinner's, making that battle a bit more intriguing to watch (that is if we had video streaming). Last Friday, we did a bit of a scouting report, where Cory concluded:

The Blue Jackets' entry could prove to be formidable and that starts with 2010 fourth overall pick Ryan Johansen, who has been compared to Eric Staal. Dalton Smith, Matt Calvert and Petr Straka are all talented wingers, while the defense features former No. 1 John Moore. Also on D are Cody Goloubef, another former running mate of McBain's with the Badgers, and Ted Ruth, who played alongside Canes prospect and Traverse City Tournament selection Kyle Lawson at Notre Dame. The biggest question mark is in net, where there is no dominant presence.

*** UPDATE from Kyle Hanlin on the new Forward Lines, including moving Dalpe from second line center to first line, on Skinner's wing, opposite Matt Kennedy. Nash is now 2nd line center, with Jared Staal as the power forward with Mike McKenzie. (I love this move, though I guess I would have seen Dalpe centering Skinner based on size and experience alone.)

with the defensive pairings about the same as the Rangers game (he mentioned the possibility of a game time decision with no further explanation).

Mike Murphy in goal for his third consecutive start, which surprises no one.

From the Columbus side, the Blue Jackets are resting Ryan Johansen tonight, and he is a healthy scratch.

We can expect @KyleHanlin to be our number one source for Canes updates during the game. The Canes have been streaming his tweets at their site for those who have not capitulated to the force of twitter as yet. And if you want to follow a Jackets fan's play-by-play, @en4cer45 is all over it.

Yesterday, Julie Robenhymer, who covers prospects for hockeybuzz.com did a sit down interview with Zac Dalpe and Riley Nash [twitpic]. I'll post a link as soon as her story goes up. In the meantime, you fan follow her @JulieRobenhymer .

Some other stories and links

From Traverse City and here in Carolina:

NHL.com's Mike Morreale is also on hand, and he posted a story about Skinner and his Kitchener teammate who is among the standouts on the Blue Jackets' blueline today, John Moore. Strong play can put Moore, Skinner in NHL mix - Traverse City Prospects Tournament John Moore and Jeff Skinner look like they could go from Ontario Hockey League teammates to NHL opponents in a quick span.

ESPN put up a slide show of the Canes game with the Ranger from Sunday with several of Skinner you'll like.

Canes Now - Rutherford: Skinner could make leap to NHL Canes general manager Jim Rutherford hasn't come out and fully awarded Jeff Skinner a roster spot for this year, but he has made some strong comments about the team's first-round draft pick.

Yesterday the Canes announced this with little fanfare (nor sequins nor swelling violins): Tim Gleason to Skate with Olympians Ladwig and Evora Carolina Hurricanes defenseman Tim Gleason will take the ice with figure skating pairs team and Mark Ladwig and Amanda Evora, on Wednesday, September 15.

Today, Eric Staal is in New York with nineteen other players for the NHL Preseason Media Day. While I'm sure there will be a lot of official interviews and videos up everywhere in the next couple weeks for now all we know is:

Renaissance Man: Given option between a) Jets MNF game and b) Jay-Z at Yankee Stadium, Eric Staal chose c) a Broadway show tonight

2) Staal was feeling light hearted as the day began, more Captain Crunch than Captain Cane. Thanks to @NHLKerry for sharing this image captioned: Eric Staal says good morning to you all. 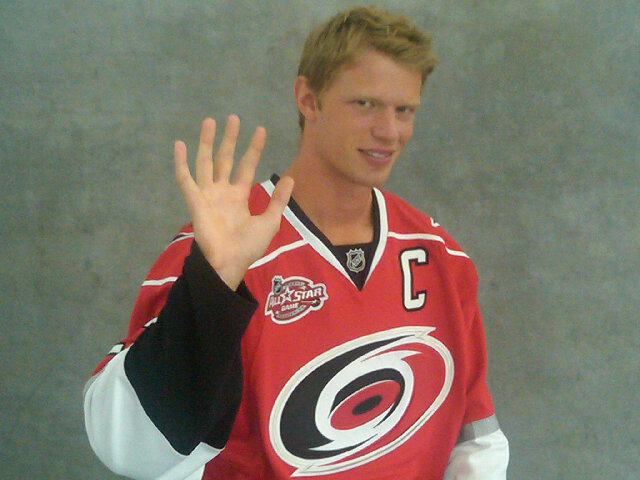 Let's hope he was thinking more of one-year-old son Parker home in Raleigh than, say,  Zdeno Chara at this moment. Otherwise it will be a long season and Chad LaRose better be ready to ride shotgun.

In fairness, check out a couple more images with more appropriate gravitas here and here and finallly here, with Zach Parise.

If you've been by Crabtree Valley Mall on Glenwood lately you've seen the Hurricanes store "The Eye" is up and running. Tomorrow they celebrate their Grand Opening with Tuomo Ruutu on hand from 1 to 2pm to autograph your fangear or snap a picture or two. Details: Ruutu to Appear at Crabtree Eye Grand Opening The Carolina Hurricanes' official retail store, ‘The Eye,’ will open a new location near the food court in Crabtree Valley Mall.

Finally in this bizarre summer of free agent contracts seeming few and far between, two announcement came last night regarding a couple of the League's most familiar names at opposite ends of their careers.

Guerin Accepts Tryout Contract With Flyers After weeks of skating with veteran Flyers, ex-Penguin Bill Guerin has accepted a tryout offer with the team. By Tim Panaccio

And has the NHLPA found the leader who will bring them together before the next round of CBA negotiations?

Donald Fehr is the players’ choice - Yahoo! Sports It’s obvious why the NHL Players’ Association wants Donald Fehr to become its executive director. The union is broken. It needs a leader badly.