Energy Level High At Day One Of Camp

Share All sharing options for: Energy Level High At Day One Of Camp

As one might expect, the Carolina Hurricanes came out with vigor and intensity for their first day of training camp on Saturday.  The prospects, (Group A), took the ice first, led by recent first round pick Jeff Skinner, for a practice filled with one-on-one and two-on-two battles, then plenty of extra skating at the end.

When Paul Maurice was asked what he thought about Skinner's first practice on RBC ice, the head coach smiled broadly.  " I saw a lot of guys that I liked today, but I'm going to reserve judgement.......  Regarding that one player, he was very, very impressive at Traverse City.  Just based on that, he's going to be a good player for the Carolina Hurricanes.  When that happens? That is what training camp is for.  But he's going to be a very good player."

When the rookie was asked about his first day of camp, he responded, "It's pretty tough out there.  The guys out here, they're all in shape, they're all ready to go.  But it was a tough practice out there, it's a lot of hard work.  I really didn't know what to expect.  It's tough, but it's been fun at the same time."

Both practices were notably longer this year than they were last, and for good reason.  The Canes did not seem ready to compete last year when the season started.  Maurice won't take that chance this training camp.

"We will be on the ice longer, we will grind longer, we will battle more," said the coach. "It’s really important not just for the younger players but for all our players to be very comfortable competing one-on-one so that when the puck drops we’re in full competition mode."

And battle they did.  When the veterans skated through one particular drill in which the defensemen hip checked forwards along the wall, the crowd was treated to some big hits on the boards.

The head coach really liked what he saw from the vets.

"There were a number of veteran guys in that second group that not just pushed the pace but brought a little bit of physicality," said Maurice. "There was some banging in practice, which is exactly what we want and what we hoped for."

Returnee Anton Babchuk was one of the physical players, a part of the game that he had not necessarily been known for in his previous stint in Carolina.  His coach noticed.

"He was one of the guys that brought a certain physicality and definitely an intensity," said Maurice. "He’s worked hard, because he was in good shape and was able to drive right through that practice and close the gap.  I think we all remember the last two and a half months of his regular season when he was here, that he and Pitkanen made a great pair, and played against the other team’s best, and that was the best hockey I had seen.  Watching him in practice today, he looks even more powerful than he was then and more confident."

The coach had Babchuk paired with Joni Pitkanen again for much of this practice as Joe Corvo and Tim Gleason also spent time together, another pairing with previous success, although from last season.

Sergei Samsonov and Jiri Tlusty both sat out.  Tlusty is skating on his own and should return to the group next week as he recovers from an offseason knee operation.  Maurice said that Samsonov was day-to-day and could be on the ice on Sunday.

While the vets and prospects were in different groups on Saturday, look for that to change on Sunday.  Maurice intentionally grouped the skaters that way for sake of the fans attending the Caniac Carnival, but prospects and vets will be mixed within the two groupings for the rest of camp.

The Carnival was well attended again this year and the crowd was very vocal during practice.

On the ice, the competition level was extremely high and it will just increase as camp progresses.  The Carolina coaching staff has a tough task ahead, and they know it.  Maurice chimed in regarding that.

"There's going to be a heck of a competition and it's going to be a challenge for us as coaches to make sure that our veteran players get enough work to be ready and we get an opportunity to look at all these other guys that are going to contest for jobs."

Sunday's practices will be held at the Rec Zone starting with Group B at 9 and Group A at 11. 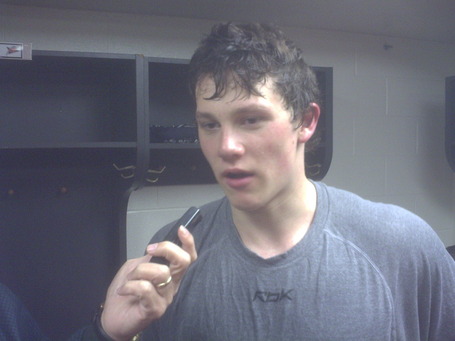