Clicks and Clippings: Change is in the air?

Share All sharing options for: Clicks and Clippings: Change is in the air?

It may not be October yet, but I no longer feel like it's a sign of [an unhealthy] hockey addiction that I'm excited about the 2010-11 season now. One week from today the Hurricanes prospects, led by a list of talented kids like Jeff Skinner and Riley Nash take the ice at Traverse City. Just four weeks and the Hurricanes land in St Petersburg, Russia for the historic (if less-than-visible) exhibition game vs the SKA team. And while in the Atlantic Hurricane Earl has weakened to just wind and rain, at the RecZone, the Hurricanes activity is clearly gaining intensity. Heck! Training camp is less than 2 weeks a way.

I made it to the RecZone Thursday and was so impressed seeing Zac Dalpe the first time. He can skate really well, and he has confidence, size and skill. More to come from this boy. It also looked like the over-30 set is not about to sit back and turn over the reins to the rookies, as Erik Cole, Sergei Samsonov and Tom Kostopoulos were very active and "assertive" (read: fast physical and intense). Welcome to the NHL, boys. It was clear as the group wound up the session that a lot of the former Albany players are enjoying this opportunity, and after the first hour, some stayed on the ice for a six-man game of end-to-end goal attempts, one round of which required banking the puck off the wall behind the home bench. Fersherr, this was more about smiles than putting it in the net. 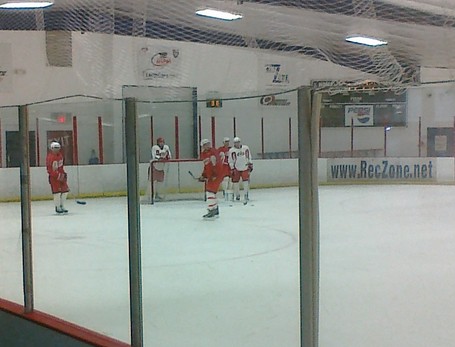 Brett Carson (red shin tape) watches his 7-iron approach to the green  60-yard attempt as Kostopoulos, Dalpe, Patrick Dwyer, and Bryan Rodney get ready for their chance to tee up. (photo by HMof2)

After the jump, lots more on the Hurricanes here in Raleigh, updates on Jeff Skinner, and a bit more hockey news for your Labor Day weekend.

Be sure to stop by LTD's Flickr site today to see some high quality images from the week at the RecZone including the return of the Captain, Eric Staal and a favorite to wear an A this season, Tim Gleason. Where else can you speculate on the appropriate caption for this image of Cam Ward sharing a moment with his favorite shot-blocker? 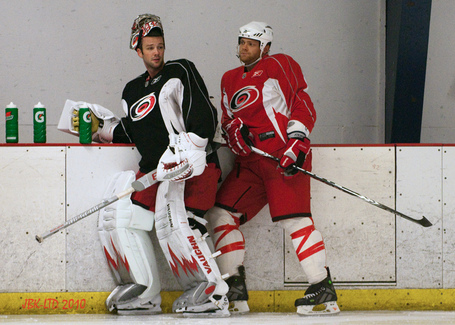 Paul Branecky, of the Hurricanes' official "Tracking the Storm" blog, had some great posts and photos this week. This might have been the best: Behind the Scenes, Canes Working Hard : Carolina Hurricanes players undergo grueling workouts led by Pete Friesen, the team’s head trainer and strength and conditioning coach. Don't miss the photo album to see that no less than Rod Brind`Amour is clearly part of these intense workouts.

Other close ups on players hoping to be playing more in Raleigh than Charlotte this season.

Casey Borer has a lot he's working through - read his story here Borer Moves on From Injuries - For the last few years, it’s been one thing after another for Casey Borer. And this story from Chip Alexander on his connection to some other Dmen we know better: Trio trying to be NHL teammates - NewsObserver.com Casey Borer, Brett Carson and Bryan Rodney have much in common.

Bowman, Terry Building on Rookie Years - TTS Blog Coming into camp from junior, there’s a little nervousness from being around the veteran guys," said Bowman, who scored his first two NHL goals against Tampa Bay on April 6. "There’s none of that this year, and I’m very comfortable with my place in the organization."

According to Mike Sundheim, Brandon Sutter and the Finnish contingent will be back in North Carolina the week of September 13th. With 20+ players on the RZ ice these days, they may be waiting till a few head up to Traverse City to have a spot in the dressing room. Here's a site for specifics on the eight teams and their rosters who will be in Traverse City and the Canes roster, in particular. I also found some great photos of the Canes squad here at 2010 Traverse City – Carolina Hurricanes at HockeyPhotography.com (all copyrighted to Melissa Wade)

This sure sounds like it might be what all these early arrivals at the RecZone are doing in their off time. The Hockey News: Justin Bourne's Blog: The Numbers Game – It’s time to start counting As training camps near, the former AHLer and NCAA player writes about the mental difficulties when trying out for a team.

Another look at how this process works, with this take on the immediate future of "El Nino":  Waiting for Nino Niederreiter, on both coasts - Lighthouse Hockey  As 2010 training camp nears, Islanders fans eagerly anticipate Nino Niederreiter, while WHL Portland Winterhawk fans hope he doesn't stay on the Island too long.

So where's Jeff Skinner these days?

NHLPA.com Video  - This was done on Wednesday, and offers only a quick view of Skinner, at the group photo toward the end, but he earned an invitation as one of the 23 top NHL prospects of the new season, posing for his 2010-11 Rookie Card. Here's the intro story from the Players Association site. NHLPA.com | Young Guns on Display These sessions will produce the photos that will eventually turn into the must-have rookie cards of the 2010-11 season and the first hockey card for some of the league’s future superstars.

Here's something you'll love to read: The Hockey News: The Straight Edge: Stamkos and others thrive with Roberts' regimen Skinner was extremely pleased with his Roberts experience. "I learned a lot from a guy who’s been through it all," he said. "That knowledge he has, it really helped me out this summer."

Out on the west coast, Traverse City bound Defenseman Rasmus Rissanen's Everett Silvertips came from behind to defeat Sault Ste Marie, who made the long trip from their OHL home. Here's a recap, and though Rissanen doesn't get a mention in the story, it was clearly seen as an impressive win.

Perhaps it's the sign that the hockey press is just plain tired of this endless summer and but there have been a few flare-ups in the evolving relationship between traditional (mainstream) media and new (blogs and twitter) the last month. It's an interesting dialog to which you will relate simply by virtue that you're reading this. This season will provide plenty more opportunities and test situations for it sort itself out in time.

One of our local Hurricanes journalists, Brian LeBlanc talks about Twitter and Facebook with Mike Sundheim, Jason Bourne, and Norton Sports Management. The Brave New World of Social Media - NHLHotStove.com

Mendes on media: Media maelstrom - sportsnet.ca Ian Mendes attempts to end the tireless battle between the mainstream media and bloggers in the sports world by providing a few rules for each side to remember.

And poor Chad LaRose just won't succumb to persuasion to join the twitterverse as he answers one fan's request at the session AAA hosted for the Helsinki-bound among us this past Monday. Blog regular RaccoonFink was kind enough to share video of Rosey's entertaining opening remarks. Chad LaRose at the Helsinki trip orientation |  By RaccoonFink

Other members of The Organization making news

Last week, Justin Shugg, considered a great fourth-round pick up (at 105th overall) by the Hurricanes at the Entry Draft following a championship season with Windsor Spitfires teammates Taylor Hall and Cam Fowler, learned that instead of returning to a leadership role in Windsor this season, he was traded to the Mississauga St Michael's Majors. It seems the Spitfires are re-building and Shugg's veteran leadership was worth a lot in trade value to the Mississauga club who gets an automatic entry into the 2011 Memorial Cup tournament as the host. Ontario Hockey League: Memorial Cup Hosts Not Sitting Tight "Our philosophy is that we like to have most of our team established early in the season," Majors' co-coach James Boyd told the Mississauga News earlier this week. "And with guys like Shugg and Cantin, you can’t put a price tag on that kind of experience." This trade puts Shugg in an even better position to earn his third Memorial Trophy - which no player has ever achieved. That's not too shabby. (Also of note: the Majors picked up Justin Peters' younger brother Anthony, also a goalie, this week). Here's the Spitfires' side of the deal: Spitfires pull plug on season

LATE ADD: Apparently Shugg was the standout player of training camp with the Majors this week. This change of plans could work out well for everyone. Their first exhibition game is Sunday, playing the same QMJHL team that the Kitchener Rangers trounced last night. Majors finish training camp: New faces and one great show - Toronto Mississauga St. Michael’s Majors | Examiner.com

“[Justin] Shugg was utilized as a depth forward on Windsor and under the shadow of the Taylor Halls and Ryan Ellis’, he was only able to open up in the second half of last season,” [Co-coach James] Boyd explained. “With key playing time, power play time, and on for key moments, time he didn’t see with the Spitfires, he will grow into a threat and a consistent contributor."

After meetings with the NHL on Thursday, Mike Sundheim tweeted that NHL.com might be streaming the Russian feed of the Hurricanes' game vs SKA St Petersburg, which takes place on October 4th, and is of course the first time an NHL team has played in Russia in twenty years. Meanwhile, a vacationing NHL journalist Mark Fischel was there this week and shared some images of the scene in St Petersburg. For example: 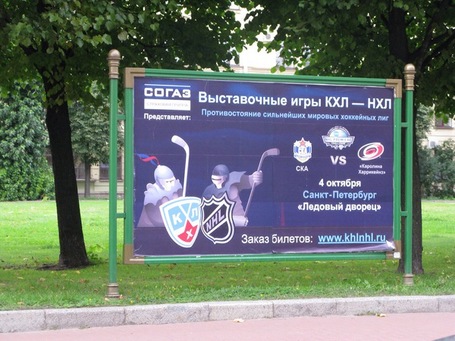 Real news and other stories around the League

So the Case of Ilya Kovalchuk's Deal with the Devils is seemingly closed. Here's a broader look from the National Post's Bruce Arthur: A grand day? So it turns out that in hockey, there can be peace in our time. It doesn’t always have to come in the form of an outright surrender; it can be an armistice.

This was a good Saturday read - and way more substantial than you might expect: Beauty and the brick - The Globe and Mail Mike Comrie's new wife Hilary Duff has finally stopped calling his jersey an ‘outfit' and he may finally get his name on a Stanley Cup with Pittsburgh.

The Southeast Division's Top Ten Defensemen - Japers' Rink An analysis of the top blueliners in the Southeast Division according to the totally unbiased statistical work by the folks at the Capitals' SBN blog. (Reading the comments, it seems they have some hard feelings about Joe Corvo.)

Having led with an image of Associate Head Coach Ron Francis looking like he can't wait to get on the ice to work with these kids, here's another chance to remember just how lucky we are to have him here to stay. Hockey's best players by the numbers they wore - NHL.com

10 -- Ron Francis Quick -- who's the fourth-highest scorer in NHL history? That would be Francis, who finished his career with 1,798 points -- including 1,249 assists, the most by anyone not named Gretzky. Though he won both of his Cups in Pittsburgh, Francis earned his nickname of "Ronny Franchise" with the Hartford Whalers/Carolina Hurricanes, for whom he's now an assistant coach.