Share All sharing options for: What Happens in Helsinki... Episode 6: Onko jo lokakuu?

In less than 30 days, a small army of maniacal fans wearing sightless eyes will descend on the Daughter of the Baltic. All of a sudden this trip is starting to get real. For me personally, Labor Day weekend was the time to finally get serious with list-making and trip preparation.

In this episode of WHIH, we'll delve into trip logistics so everyone knows what really is happening in Helsinki and when, and perhaps even share a few handy travel tips. Most of this information comes from a briefing meeting with AAA (along with special guest Chad LaRose) that was held at the RBC Center on Monday, August 30. 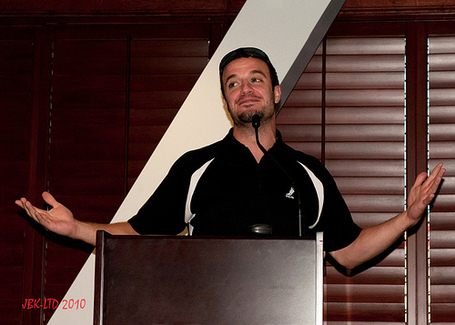 Chad LaRose works the crowd at the AAA meeting on August 30th: via flickr - Author's photo

Over 250 people are booked on trip packages through AAA, either through an all-inclusive air and land package that departs on Monday 10/4 and returns Saturday 10/9, or through a land-only package with varying airline departure and arrival times.

Several people purchased tickets only and made their own airline and hotel plans (I count around 25-30 who have been in direct contact with me). So we are holding strong at 300 Canes fans or more in the building for the games. For comparison, AAA Minneapolis has sold around 80 trip packages (their trip was longer and pricier than ours), and bloggers for the Wild are estimating around 150 Wild fans total purchased tickets either through AAA or on their own, which in itself is an impressive number and comparable to traveling attendance at last years' Premiere events.  But we double that prediction.  Folks, we are representing in a big way. The Canes organization has noticed, and I suspect the NHL has as well. If not, they will soon enough.

The Canes play their last US preseason game on Friday afternoon, 10/1, at 1:30 pm against the Thrashers (the game is free to the public - details here).  Once the game is over the team departs immediately to the airport for the trip to Russia for the exhibition game against SKA St Petersburg on Monday, 10/4.

The contingent of Canes fans leave shortly after that, a few groups leave Saturday 10/2 and Sunday 10/3, with the majority on the AAA all-inclusive package leaving Monday 10/4 and arriving in Helsinki the morning of 10/5.

Tuesday 10/5 - No group-planned activities on the AAA itinerary.

Wednesday 10/6 - We attend the Canes practice at Hartwall, followed by a group lunch with the team.  The rest of day is at leisure with no activities on the itinerary.

Thursday 10/7 - There is a AAA group tour of various Helsinki tourist sites in the morning (Sibelius Park, White Cathedral Tuomiokirkko, Rock Cathedral Tempelliaukio). Afternoon is at leisure.  Buses board at 5:30 pm for the first game against the Wild at 7:00 pm (noon in Raleigh).

Edited 9/8 to add:  For those interested, the AAA groups will be sitting in the following sections:

Friday 10/8 - There is an optional AAA group trip to the village of Porvoo which leaves in the morning and returns early afternoon, followed by the second game Friday night (same times).

Most travelers depart on Saturday afternoon 10/9 with a few staying through Sunday 10/10.

Fans arriving in Helsinki on Saturday or Sunday will be there in time for the start of the exhibition game against SKA on Monday night 10/4. According to Mike Sundhiem, the game will be broadcast in St. Petersburg, and while there are no plans to show the game on TV in either the US or Helsinki, there is a chance the broadcast could be carried online on nhl.com. So set your browsers accordingly! For those of us in Helsinki, many will have access to the game via laptop/wifi, but I am checking with AAA and the Radisson Blu Plaza to see if they can get us access to a big screen for group viewing. I'll post here if I hear any updates in that regard.

On Wednesday evening 10/6, some of us have plans to meet up with one of our Finnish blogger friends, Juha Hiitelä, location still to be determined but it will likely be close to the hotel. This would probably be a good "meet up" night in general for folks wanting to get together prior to the games. I'll post details here when time and location is confirmed.

There's been a lot of discussion here and on the Facebook page about other fun things to do in and around Helsinki. Here are some ideas that have been shared by travelers and Finnish friends, click on the links and have some fun!

I would love to hear from fellow travelers on any specific plans you have made or any other treasures that need to be added to the list.  Also I know we have many readers from Finland, please weigh in with your suggestions as well, they are much appreciated!

With a little less than a month to go, now's the time to start crossing some of those nagging travel to-dos off the list, for example:

Trivia: With mobile giant Nokia headquartered in Finlnd, Finnish citizens are some of the most prolific users of mobile technology in the world (often at inopportune times). Finnish native Matti Makkonen is known as the father of modern text messaging services using SMS technology. Finns often claim they invented text messaging so they wouldn't have to talk to each other. Finland is also very internet-accessible, being the first country in the world to make high-speed internet access a legal right.  So family and friends can rest assured that communications will be flowing freely between the continents.

The next episode of WHIH will likely be about t-shirt distribution, as soon as I get a confirmed delivery date and can create a distribution plan. Until then, Hyvä Suomi and Hyvä Canes!