Clicks and Clippings: Gearing up

Share All sharing options for: Clicks and Clippings: Gearing up

Let's dive right in, shall we?

Yesterday was the Annual Media Golf tournament; it seems everyone who is anyone in Hurricanes media was there and has shared some great interviews with Coach Paul Maurice, GM Jim Rutherford (who completed his natural hat trick of tourney wins with three-in-a-row), Captain Eric Staal, franchise goalie and pilates-devotee Cam Ward, and familiar wingers Chad LaRose, Erik Cole, and Tom Kostopoulos. Defensemen Joe Corvo and Tim Gleason were also there, rounding out the veterans who were called upon to field the questions.

First some written stories, and after the jump I've got links for many videos, and several stories looking beyond the Triangle.

Paul Maurice Q&A, Part 1: Carolina's Head Coach To Have Team "Play To Its Strengths" - Canes Country From our very own Bob Wage. Look for lots more to come over the next couple days from both Maurice and Jim Rutherford.

Puck Drops - Recap: Canes Media Day and Interview Sessions But where last year the scuttlebutt was that the playoffs were all but assured, by contrast this year the P-word was never even mentioned in six interviews I conducted. Brian LeBlanc has audio links of his interviews with Maurice, LaRose, Corvo, Ward, Staal, and Rutherford, including this intriguing development:

Rutherford says he anticipates one or two NHL veterans attending training camp, either on a tryout basis or on a two-way contract that he will finalize in the next week or so. He was very clear, though, in saying that no one would be gifted a roster spot, and to that end he will not be handing out one-way deals with open invitations to claim a spot. In other words, don't expect a Stephane Yelle or Josef Melichar-type signing this season.

"I don't think our goal should change," GM Jim Rutherford said today at TPC Wakefield. "I do expect the critics to say because we're in a transition, we're not going to be expected to do as well. But our team, the way it's built, and with such key and character players. and the goalie we have, if we get in the playoffs we can contend for the Cup. So now we have to figure out a way to get in."

Despite changes, ‘Canes roster has familiar feel - WRALSportsFan.com There's this AP story, and then you'll several links to videos made yesterday with Ward, Staal, Cole, LaRose. You'll see both consisency and variety of answers on display when asked about the big trip to Helsinki, which prospect is the most intriguing, do you feel old, and individual hopes for the All Star Game.

They're all good, but don't miss this one with Cam Ward, who may face the most serious questions of the day regarding the status of his back for the upcoming season:  Extended interview: Cam Ward

Canes Hope to Benefit from Competitive Camp - TTS Blog Competition is expected to be fiercest at forward, where, realistically, there could be as many as four open spots for as many as 10 players. With Rutherford having said that the team could carry as many as eight defensemen on the initial post-camp roster, jobs on the back end could change on a nightly basis.

Tuomo Ruutu was back on the ice yesterday - as Canes Country's LTD reported by twitter with excellent pictorial support. 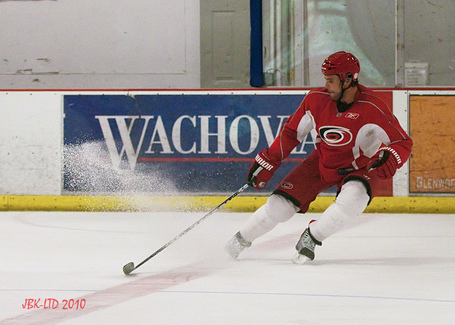 Today we heard more from the favorite Finn. Canes Now - Ruutu expects to be same ol' Ruutu Tuomo Ruutu is back from Finland, saying his surgically repaired shoulder is healthy and he's ready to play.

Babchuk, Canes Leave Past Behind - Tracking the Storm Blog In a summer when more and more players are heading abroad, Anton Babchuk has bucked the trend once again. More on Babs: Babchuck returns to Canes' blue line -  NewsObserver.com Anton Babchuk's big shot made him a 16-goal scorer for the Canes in the 2008-2009 regular season. But his offensive productivity fell off dramatically in the 2009 playoffs. So did his confidence.

In further cost-saving measures, Cam Ward to Paint Ice with Capital City Crew;We should be able to watch live via the RBC webcam, as we did last year. 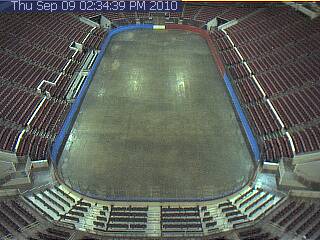 It's that time of year: Season previews

Season Previews, Twitter Style: 30 Teams in 1 Day | Jerseys and Hockey Love So how many previews do you need? One more, of course. This is a pocket sized preview of all thirty teams, in 140 characters each.

KOL Season’s Greetings: Carolina " Kings Of Leonsis Ouch. What a season the Carolina Hurricanes had last year. Not much can be said about their disastrous effort during the 2009 portion of the 2009-10 season, but the 2010 part proved that the Hurricanes can still rock ‘em.

From the blog that covers all things about 'tenders: The Goalie Guild. Go to their September Scouting guide, page 13 for the Canes prospects in goal with a few surprises as Mike Murphy, 19th in their top 100, ranks highest of the five in the system. Justin Peters shows up at 29th. Hmmm.

And with all the talk on new Bolts GM Steve Yzerman as the best thing to happen in Tampa Bay since the lock-out, don't forget the huge changes in another SE division rival in Atlanta, covered with this in depth interview from their new bench chief: Coach Ramsay believes defense can be Thrashers strength | Atlanta Thrashers: Iceman

With the first game about 48 hours away at 3pm Saturday, the Canes prospect team featuring Jeff Skinner, Riley Nash and many others in their first meaningful outing since they joined the Hurricanes organization, I'll be looking for every morsel I can find on the tournament which kicks off Saturday. Here again is the Canes roster.

Latest Stories and Headlines - Traverse City Prospects Tournament The best place to read what Mike Morreale is writing from his favorite tournament of the year, for example: Yzerman's Lightning will be Wings' foe in Traverse City The annual Traverse City NHL Prospects tournament will mark the first time Lightning GM Steve Yzerman will go against theDetroit Red Wings.

Word has it there will be no TV coverage (alas), but Kyle Hanlin of the Hurricanes is en route to cover it live for the fans following from home.

Which segues nicely to....

Here's a teaser just in from a Kitchener Rangers blog, Rangers Rap: The Skinny on Skinner

"We are transitioning our team into a much younger team." So says Carolina Hurricanes GM Jim Rutherford. Spoke to him today. More on the Canes and Jeff Skinner's chances of making them in Friday's Record.

More from north of the border: NHL Prospects: 2010 1st-Rounders - leafspace Blog post - Official Home of Leafs Nation From Steve Dangle, who tweeted this follow-up to me yesterday:@HMof2: I asked that OHL player if he had a criticism for Jeff Skinner's game. He took a long pause and said, "Honestly, I got nothin'."

OHL Forward – "Really good. Plays a lot like Crosby. Very dominant down low. Has a nose for the net. Struggling to find a bad thing to say about him." When asked if he would him [be] top 10. "Yes. If somebody that was 6'2'' put up those points they'd be. Only issue is his height." He ended up being correct!

OHL Defenceman - The most gifted goal scorer in the draft, small-ish but not afraid to go to the net. Uses his team mates well to create space for himself.

Part 2: NHL Prospects: 2010 Rounds 2-7 With his recent trade to Mississauga, Shugg may have found himself in a very good situation:

OHL Coach - Underrated. Played most of year on checking line with Timmins and scored 40. Not even on first unit PP until end of year. Skating is okay. Needs to be more physical.

College Hockey News: CHN Preseason Top 10 has Boston College ranked at #1: The seasoning of sophomores Patrick Wey, Philip Samuelsson and Brian Dumoulin should give the backline a more-than-capable replacement. All the elements are in place for another BC run to the Frozen Four.

Canes alumni growing -  NewsObserver.com It's time to take on the Philadelphia Flyers' Alumni. It's time to go head-to-head with the Toronto Maple Leafs' legends. It's time to see the history of the Carolina Hurricanes in the flesh.

The Hockey News: Top Shelf:  Aaron Ward at peace with retirement The 37-year-old veteran NHL defenseman talks about his decision to hang up the skates and how he came to the conclusion.

For Wild's Matt Cullen, it was worth wait - TwinCities.com Hockey in Minnesota is just different. Matt Cullen didn't know he'd create such a buzz by signing with the Minnesota Wild. With countless fans coming up to him this summer and offering words of encouragement, Cullen is so amped up that he's ready to skate through the end boards right now.

Hockey superstars kicking off the season

Great combination of personalties when Greg Wyshynski goes one-on-one with Patrick Kane at the premier of EA Sports' NHL11 yesterday. Video: Patrick Kane on Blackhawks' summer of change, trick-shots, 'Twilight' books and Jonathan Toews - Puck Daddy Kane took some time to answer some questions about the Blackhawks' summer talent purge; his enthusiasm for 3-on-3 overtime; whether he or Toews have called Ryan Kesler to give him grief for NHL 2K11; as well as Kane's hidden love of "Twilight" books and the glory that is Lake Toews.