The Road To Raleigh: In it for Bennett

Share All sharing options for: The Road To Raleigh: In it for Bennett 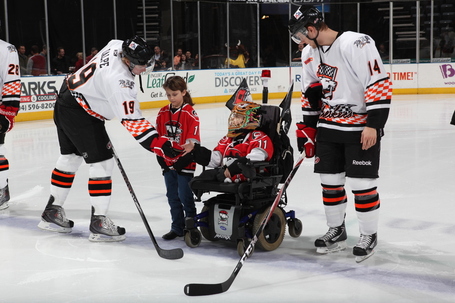 (Zach Bennett is presented with a puck during pre-game ceremonies, via Gregg Forwerck)

Often times things are taken for granted. We take for granted everyday the fact that we live in a country that allows us to practice whichever religion we choose. We take for granted every day our freedoms, and our health. So many of us are blessed with good health and able bodies. To get a look at what real courage is, is to take a look at the life of someone like Zach Bennett. Zach lives his life with neurofibroatosis, and is a living example of what having strength means.

The big story this week was Zach and his family. After traveling down from Albany, New York, the Bennetts were guests in all three Checkers home games this week. The winning ways were present for Charlotte when they dropped Norfolk on the road, and beat Manchester in their second try. Charlotte earned a 2-2 split in the four games this week to take four out of eight available points. More after the jump.

A rough stretch last week saw the Checkers lose three out of their four games. Looking to rebound, Charlotte took to the road to battle Norfolk on Tuesday night. Oskar Osala's first period goal stood up as the only scoring until Nicolas Blanchard netted one to give the Checkers a two goal lead which they would nurse en route to a 2-1 victory. Coming back home to Time Warner Cable Arena, the Checkers welcomed Zach Bennett and his family for the three weekend home games. The Checkers lost the first game to the Monarchs, but bounced back on race night to win in a shootout. The rematch with Norfolk on Sunday went sour despite two goals netted by Brett Sutter and Brett Carson.

The Wilkes-Barre/Scranton Penguins really know what they're doing. Looking at their record, one thing that stands out is that they haven't yet lost in overtime or a shootout, and they are the only team in the American Hockey League to still have a loss count that is a single digit. With the win on Sunday, the Admirals pull two points past the Checkers for second place. Hershey sits two points behind Charlotte with three games in hand. The Senators refuse to go away as they hover in fifth only three points behind Hershey.

*Congratulations are in order for familiar defenseman Brett Carson. Carson netted his first goal of the season, a powerplay goal that saw him rip a one timer from the point which beat Desjardins in the second period. Carson also laid some nice hits this week

* The leading scorer this week for the Checkers was Brett Sutter. Sutter makes a surprise appearance as a scoring leader with five points in four games. (3 goals, 2 assists)

* Oskar Osala scored twice and added an assist for three points in the four games this week. He was very physical against rival Norfolk and even fought Scott Jackson in the second period to get the crowd going.

* Zac Dalpe played in two games after he was reassigned. He looked noticeably more confident and scored a goal and added an assist.

* Cedric McNicoll has looked very comfortable with the Checkers. This week, he scored twice and got an assist. His two goals were his first as a Checker after playing with the Florida Everblades until this point.

* Jon Matsumoto appeared in three games after being reassigned. The going was tough as he scored one goal and ended up as a - 2.

* Jerome Samson dished the puck this week on his way to gathering three assists in the four games this week.

* Justin Pogge won his start against Norfolk and was the first star as he turned away 33 Admiral shots, allowing only one goal on the night. He lost the rematch against the Admirals, and lost in Thursday's game to the Monarchs.

* Mike Murphy started on race night in front of 10,000 plus. He didn't crack under pressure however, as he led the Checkers to a big win in a shootout.

*Congratulations are in order for Bryan Rodney and Jerome Samson, who will be representing the Charlotte Checkers in the AHL All-Star game this year. Good job guys!

This week was a really big one for the Charlotte Checkers. It would have been very nice to take all four points from the Norfolk Admirals. Letting them off the hook on Sunday really hurt, as even taking a point from them would have been better. Manchester is a very good looking team- give them credit for never going away during the course of both games especially on Race Night when they battled back from three down. Mike Murphy made some incredible saves on Race Night, and Checker shooters shot the lights out after Zac Dalpe was stopped. Drayson Bowman, Jon Matsumoto, and Chris Terry all scored in succession to end the shootout.

Team toughness has been present at all times during this week. Zack Fitzgerald has been protecting teammates and has been up to his usual hard nosed tricks. As it turns out, Fitzy is the favorite player of Zach Bennett, it was great seeing the two talk before the game. Brett Sutter dropped the gloves, and surprisingly, so did Oskar Osala.

Having Zach Bennett in the house was a special thing. Zach enjoyed seeing all of his heroes in action, and a lot of money was raised towards his family's goal of relocating to Charlotte from Albany. Race night jerseys were auctioned off for hundreds of dollars each with the proceeds going to the Bennett's. Six dollars from every 15 ticket sold on Race Night was also donated to the Bennett family. Zach was also presented with a paralympic sled to use on the ice for Sunday's skate with the players autograph session. NASCAR racer Joey Logano was in the house and did the honors of presenting the sled to Zach.

The Checkers will host the Springfield Falcons in two games at the TWC Arena this week. If you recall, the Falcons are the same team that embarrassed the Checkers in their home arena a few games ago- let's see if the Checkers have revenge on their minds. The week will be closed with another Sunday evening affair against the Wilkes-Barre/Scranton Penguins. 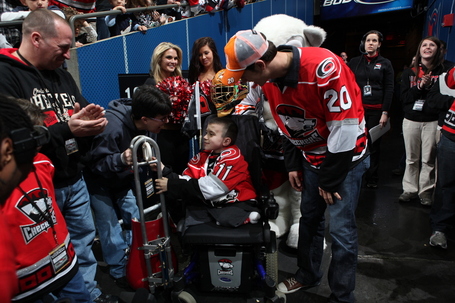 (Joey Logano presents Zach with his own paralympic sled, via Gregg Forwerck) 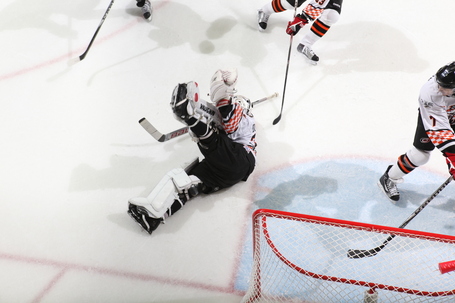 (Mike Murphy sprawls out to make a save on race night, via Gregg Forwerck) 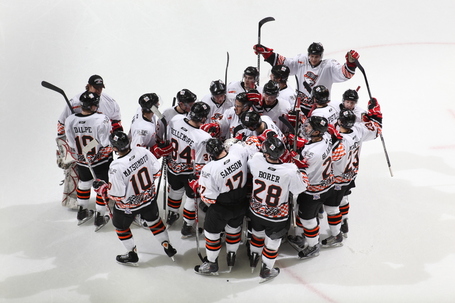 (A shootout win is what the doctor ordered for the Checkers, via Gregg Forwerck) 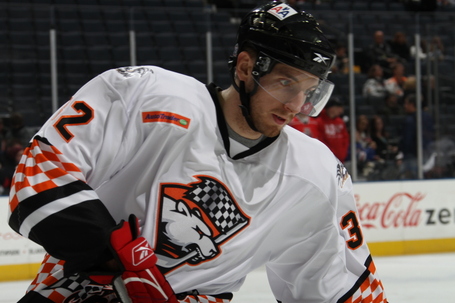 (For those who haven't seen the race night jerseys, Oskar Osala was kind enough to model them for you, via Gregg Forwerck) 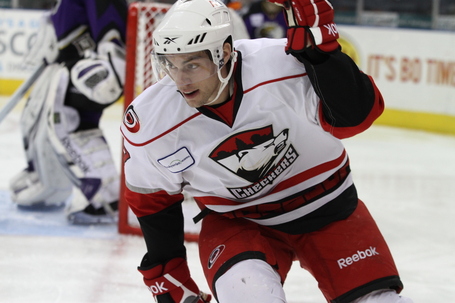 (Jerome Samson knows how to score, via Gregg Forwerck) 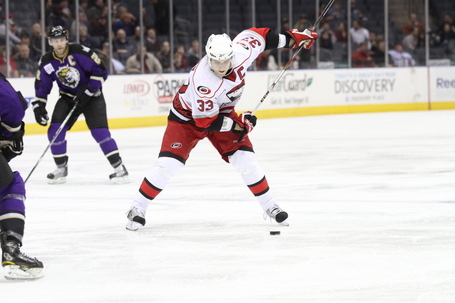 (Bryan Rodney prepares to fire a slapper, he's an all-star you know. via Gregg Forwerck) 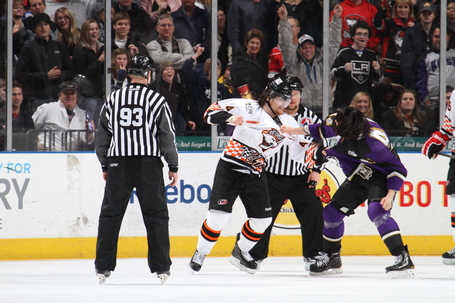 (This is why we love Zack Fitzgerald, via Gregg Forwerck)