Share All sharing options for: Clicks and Clippings: Skinner Winner

With Skinner's strong resurgence in the numbers he's putting up, among rookies and veterans alike, added to the announcement of his inclusion in Sunday's All-Star game here in Raleigh, there is more buzz than ever about Carolina's favorite rookie. Some stories and audio to hear what they're saying.

Canes' Skinner rates among NHL's top rookies -  NewsObserver.com Carolina Hurricanes rookie center Jeff Skinner has shown a flair and creativity that has him at the top of the league among rookies in points and assists.

Shortly after the announcement, Jeff Skinner was trending worldwide on Twitter - from @Tachibana828. That he is trending in Raleigh is just as cool.

Remember that Jeff Skinner is scheduled to be the guest of Mike Maniscalco on the WRAL's "Canes Corner" Thursday night, at 6pm. If you don't feel like camping out at Backyard Bistro all day to get a seat, you can listen on 99.9 ESPN the Fan, streamed here.

UPDATE: Responses to the announcement with these 2 audio clips from Long Island this morning from Paul Maurice [link, 2 minutes] and Jeff Skinner [link, 6:40 minutes].

More on the Skinner and All-Star game details and stories after the jump.

"He's always had a quiet, inner confidence," said Andrew Skinner, an attorney. "He has always been a kid who works hard. He's extremely disciplined and makes the most of the ability he has."

Rookies get exposure -  NewsObserver.com The All-Star Weekend will offer a chance to see many of the candidates for the Calder Trophy, awarded to the top rookie each season.

Rookie Skinner has been a Hurricane force - USATODAY.com With five goals in his past six games, Skinner now has 16 goals and 20 assists for 36 points in 45 games. He's on pace to have a better rookies season than either Steven Stamkos (46 points in 2008-09) or Matt Duchene (55 points last season)   USAToday has a follow up story quoting Jim Rutherford on Skinner earlier this season: Hurricanes' Skinner joins main All-Star Game - USATODAY.com

Red Light District: Calder Trophy race heating up And that's the thing - Skinner is 18. He was drafted just last summer. His two biggest competitors are eight and three years older than him, respectively, which has to impress the voters (but like I said earlier, it is not the deciding factor).

The Fourth Period : Rookie Watch : No. 1 Skinner back at the top spot here too.

The Nabokov mess and 30 thoughts - Elliotte Friedman A wide ranging weekly column, but #26 caught my eye:

26) One of the reasons Jeff Skinner scored huge points with Carolina teammates this year? Little things, like waiting outside the team's plane until all the other players have selected their seats. Those kinds of moves go a long way.

Other Hurricanes talking about Skinner

Rod Brind'Amour - The FAN 590 Toronto More good Audio, this time with the Cane's Stanley Cup hero and former Captain. Talks about hockey in Carolina, and gets the Skinner question too.

Here's the official roster for the weekend, with one more opening for a forward. Will it be Logan Couture, Taylor Hall or another vet? [UPDATE: Paul Stastny, of the Colorado Avalanche, is the final name to complete the roster.]

Staal epitomizes leader, All-Star -  NewsObserver.com Eric Staal of the Carolina Hurricanes has played in other All-Star Games and should play in more in the years to come. But there may never be one quite like the one Sunday.

John Forslund's story as he gets set to shine this weekend too: All-Star spotlight finds Hurricanes announcer - NewsObserver.com A few weeks ago, John Forslund had no idea what he'd be doing when the NHL All-Star Game came to the RBC Center. Now, he has no idea when he'll have a free moment.

Vacation time for rest of Canes -  NewsObserver.com While dozens of NHL players and league officials are converging on the Triangle for the weekend's All-Star festival, many of the Carolina Hurricanes will hit the exits.

For the Triangle area in general, some good posts:

1) It's not pronounced Ray-lee. Seriously, I heard this abomination over and over during the Stanley Cup runs in 2002 and 2006. It's Rah-lee. Learn it. Live it. Love it.

Something completely different and well worth reading about: what good works will remain when the show is over? Legacy Gift, from Carolina Hurricanes' Doug Warf At the North Carolina Children’s Hospital, the NHL and the Carolina Hurricanes will leave a permanent All-Star mark.

NHL tries to jazz up its game - NewsObserver.com The Triangle will discover this week the dirty little secret of the NHL All-Star Game: What actually happens on the ice is the least important part of the entire weekend.

And to watch what's happening to prepare the inside the RBC Center, keep an eye on this site here, to see images from the arena's web-cam. 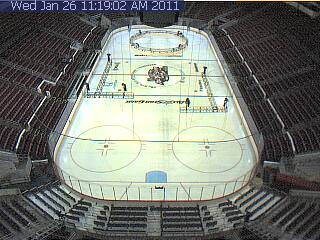