Are there any losers in an All Star Game?  Probably not, but Team Lidstrom scored more goals in the 60 minutes allowed and defeated Team Staal, 11-10 in a typical, high shooting and high scoring all star affair at the RBC Center on Sunday afternoon.

Fans certainly were not losers, as they were treated to top notch entertainment throughout the event and they responded in kind with loud cheering at all the right times.

The atmosphere was electric for a so called "meaningless" game which technically doesn't count toward anything but a bit of pride for the players.  But the RBC faithful cheered like it was a playoff game, at least for the beginning of the contest.

The prelude was touching as they enacted a scene at center ice starting out with kids choosing up sides for a pond hockey game.  The next thing you know, Rod Brind`Amour skated out, along with Ron Francis, and then the captains came out, Eric Staal and Nicklas Lidstrom.  The skit was very nicely done. 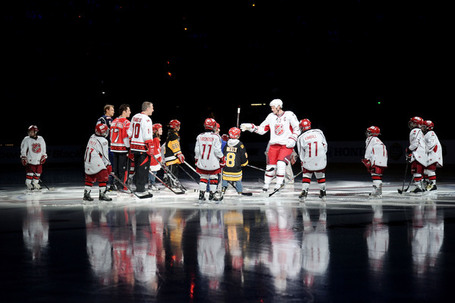 Next up, the Canadian Tenors performed an inspirational "Oh Canada", followed by Clay Aiken, who showed that he still has range in his voice, when he sang the "National Anthem."

The game started out all home team as Team Staal jumped out to a 4-0 lead.  But Team Lidstrom also scored four in a row to tie things up by the end of the period.

Cam Ward started out well and held the opponents scoreless in the first 8-9 minutes, but found things tough going when Lidstrom's crew got warmed up.

"I started out thinking maybe this wasn't so bad after all," the goalie dead-panned after the game.

Ward gave huge props to the crowd and to the people of Raleigh.  He mentioned that when these players go back home, they'll be talking about this experience.

During the first intermission, 3 Doors Down played a couple of songs.  This certainly was not an ordinary day at the RBC. 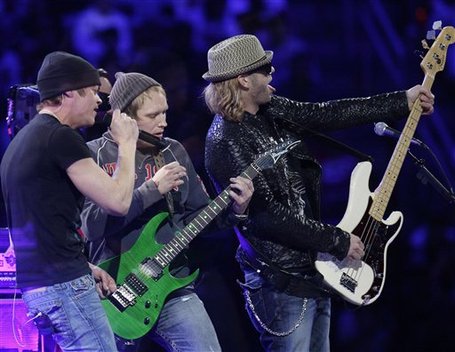 In the second period, Lidstrom's team would grab the lead for the first time and then held on for the win in the third.

It was a typical All Star match up, there were no checks, no slap shots, and no hits.  The closest thing anyone did to anything questionable was when Alex Ovechkin tossed his stick up the ice to distract Matt Duchene on a breakaway.  The strategy worked as the youngster missed his chance, but he was given a penalty shot on the play.  Henrik Lundqvist came up big and stopped it.

Patrick Sharp won MVP honors and said his dad and brother will have to fight over who gets the new vehicle he won, which is included with the trophy. Sharp had a goal and two assists, (at one time he had three assists, but one was changed).

Staal scored two goals, one in the last 33 seconds to make it a one goal game.  Anze Kopitar, Danny Briere, Loui Eriksson, and Kris Letang also had two goals each.

Lidstrom had a pretty good day and finished at +7.  Shea Weber was +6 and had four assists.

Jeff Skinner's linemates, Patrik Elias and Paul Stastny, were trying to set up the rookie, but to no avail.  He did come close on several occasions though.

Bottom line, the players had fun, the fans enjoyed it, and no one got hurt.  It was a successful event.

I'll share some of my highlights as well as some final thoughts of the weekend later tonight or first thing Monday morning.