The Road To Raleigh: Checkers Slowed on the Road

Share All sharing options for: The Road To Raleigh: Checkers Slowed on the Road 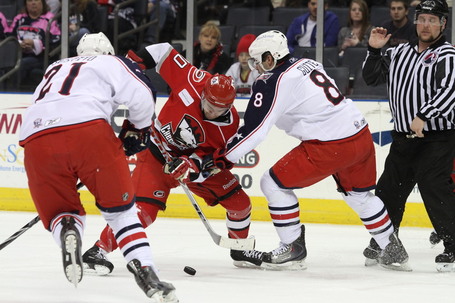 (Jon Matsumoto stick handles through the zone, via Gregg Forwerck)

The Checkers embarked on a week long road trip, starting with a rematch with the Wilkes-Barre/Scranton Penguins. The Penguins, fresh off of a 9-5 beat down at the hands of Charlotte, responded with a two goal win on their home ice. The lowly Phantoms were up next for Charlotte, followed by the ever tenacious Hershey Bears. Unlikely goal scorers were the story of the week it seemed.

We'll keep Road To Raleigh somewhat brief this week, as we are all involved in post All-Star Game frenzy. Please excuse the lack of pictures, as no home games has given me little chance to receive any pictures. A look at the important points after the jump.

The Checkers saw a good amount of success last week, as they took two out of three games, including their nine goal outburst against the first place Pens. Zach Boychuk's hat trick was one of the main stories of the week, and was his final chapter before another call-up to the NHL Hurricanes to replace the injured Patrick Dwyer. Boychuk suited up for two of the games this week, after he was returned to the Checkers.

The rematch with the Penguins went wrong for the Checkers on Wednesday. Dustin Jeffrey notched an unassisted shorthanded goal in the first period to give the Pens the momentum, and Ryan Craig tallied 36 seconds after to give the Penguins the lead. Charlotte stormed back to tie the game at four going into the third, but Ryan Craig scored again, and Tim Wallace put the final nail in the coffin. In Adirondack, a goaltender's duel was settled by Jerome Samson's third period goal that broke a 1-1 tie. Brad Herauf scored his second goal of the year as the tough guy showed some offensive flash. Another goaltenders duel pitted Justin Pogge against the Bear's Braden Holtby on Saturday. The lone goal of the game came off the stick of seasoned veteran, Sheldon Souray. Souray's powerplay goal was his third of the year, and proved to be the decisive tally as the Bears won 1-0.

The Penguins continue to roll on with a league best 72 points. A recent surge has allowed the Bears to take sole possession on second place with two games in hand on Norfolk and three in hand on Charlotte. The Bears recent hot streak has seen them lose only once in regulation in their last ten games. The Checkers have made a habit of alternating losses and wins, which is shown by their 5-5 mark in their last 10. The Admirals have been playing at a similar pace, but one of their five losses allowed them to secure a point.

* The tough guy, Brad Herauf showed that he knows how to score on occasion. His goal against Adirondack was his second of the season

* Jerome Samson scored twice in his three games this week. His season goal total is a team best, 23.

* Mike Murphy was in net for the only win of the week. Murphy turned away 32 of 33 Phantom shots en route to a victory. Hard luck for Justin Pogge, who was saddled with both losses this week.

* Riley Nash scored again this week, running his season goal total to the double digits (10). The two way center-man had his goal assisted by the ever popular Nicolas Blanchard, and the All-Star, Bryan Rodney.

* Oskar Osala scored his 13th goal of the year against the Penguins on Wednesday.

* Zach Boychuk had a quiet return to the AHL as he didn't register a point in the two games later in the week.

Beating the Penguins in their house again would have been very nice. However, after dropping that game, the Checkers responded positively against a lower-tier team they know they must beat. Taking care of the Phantoms thanks to the third period heroics of Jerome Samson was what the doctor ordered, but a 1-0 loss to the Bears was not. The goaltender's duel saw the Checkers powerplay stumble as it went 0 for 11. Yes, you're reading that correctly. In comparison, the Charlotte powerplay went 1 for 6 against the Pens, and 1 for 4 against the Phantoms. The Bears kill was a big part of their win, and Sheldon Souray scored a huge goal with the man advantage to make Charlotte pay. Braden Holtby proved impossible to solve for the Checkers.

The NHL All-Star game was a huge success, but how about the AHL festivities? The All-Star classic will take place tomorrow (Monday), but a big shout-out to the Eastern Conference for their 19-7 win in the skills competition! Jerome Samson took part in the relay race heat number two, and Bryan Rodney participated in the Reese's "Pass and Score" competition.

A quiet week on the Charlotte front this week. A Thursday night affair with the Norfolk Admirals promises to be a big game, and then a Sunday evening affair with the Providence Bruins with close out the week.

With the Spokane Chiefs of the WHL, Drayson Bowman scored over 40 goals, and gathered over 100 penalty minutes. Bowman now has found a home with Jerome Samson and the Checkers.

For this week. let's glance at Oskar Osala. Osala has spent time in the Washington Capital's organization, and now in the system of our beloved Hurricanes. Oskar has appeared in NHL games before- he knows firsthand what he needs to do to make it to the bigs.. how many NHL level games has Oskar suited up for?