Clicks and Clippings: Eric and the Staal-Stars

Share All sharing options for: Clicks and Clippings: Eric and the Staal-Stars

If this morning's collection of links was all about us, this C&C will have you scanning through a multitude of feature stories and even more videos to see how your four Carolina All-Stars performed when they found themselves in the limelight this weekend.

I'll start off with the Official game highlights in 16 minutes, but mostly cause I know what those the first 120 seconds will do to you.

After the jump I've collected the available videos and stories I could find on Eric Staal, Cam Ward, Jeff Skinner and Jamie McBain and how they showed their stuff this weekend. I've also got audio links for Jim Rutherford , John Forslund and Luke DeCock all trying to articulate what this weekend means to the Carolina Hurricanes.

RBC fans exalt Carolina trio despite loss - NHL.com Dave Lozo talks to our foursome about their experience this weekend.

The entire weekend should serve as an eye-opening experience about the passion of hockey fans in North Carolina. Whether it was the NHL Fan Fair or Honda SuperSkills or the All-Star Game itself, the players were blown away by how much energy and enthusiasm the fans brought to the table.

For the Friday night draft, Carolina's newfound Media Darling and master of comedic timing  was watched by 1.5 million in Canada, which includes their Golden Boy's [ballsy] diss of Toronto as "not a hockey market".

Look what I found: Before the Skills competition, Hockey Night in Canada ran this 5-minute video feature on our Captain: CBC.ca's Inside Hockey: Eric Staal A remarkable open and personal focus piece that starts with Paul Maurice, Rod Brind`Amour, but really seems more about his life and career in Raleigh, with Tanya and Parker.

Saturday afternoon on the Red Carpet

Mic'd up during the game Sunday

His casual exchange with Skinner discussing the wisdom of Jeff staying mum with Henrik Lundqvist about the highlight goal Skinner scored on the Rangers goalie in October is great sports television. [I'm still looking for this - saw it yesterday, but it's disappeared]

After the Game with Heidi Androl

The next day on the Red Carpet with Heidi Androl

Luke DeCock added some background on how this went down in his story: Players embrace weekend's fun theme - NHL All-Star Weekend - NewsObserver.com It's been clear since Friday night's draft that anything goes during this All-Star weekend. When Cam Ward got the call Saturday afternoon asking him if he'd be willing to become one of the first goalies to compete in the fastest-skater competition, how could he say no?

Cam Ward was also Mic'd up - which I enjoyed during the game, never saw it as a separate post.

Canes Now - Rutherford: Canes can get the job done (from earlier this afternoon)

Rutherford said he was not concerned that Skinner may feel the effects of being a center of attention much of the weekend. "Not at all," he said. "I think it turned out perfectly for him. It was an honor for him, to be that young and to play in an All-Star Game. He handled himself in a first-class way and it was a great experience for him."

I'm including this first video because I want everyone to hear Andy Skinner, Jeff's salt-of-the-earth dad, trying to explain what this experience has been like for both him and his son, and finding the words to explain that the admiration the Carolina fans have for his son is entirely mutual: Skinner Has Reached Bieber Status Video - NHL VideoCenter

This feature was easy to miss because it aired on the local ABC news Friday, when most of us were attending or watching the Fan Fair and Draft coverage, but this feature from Mark Armstrong was the most quiet and thoughtful interview of Jeff Skinner I've seen lately. Petedawg does well too. Skinner enjoying new life in NHL and Raleigh | abc11.com [I'd recommend watching in "full-screen" mode]

Here's yet another story trying to figure out exactly what it is about Jeff Skinner: Jeff Skinner's dream season hits all-star peak - Nicholas Cotsonika,  Yahoo! Sports. Who else would give these kind of quotes?

The kid is so peach-cheeked that he shaved only once every two weeks until he got an electric razor recently. ("I have some hair," he said. "It’s just not noticeable.") He had never traveled to a game by air until he made the NHL in the fall. ("The plane’s pretty nice," he said.)

This excellent feature video was done by TSN in Long Island, after we heard he was going to be playing in the big game last week. Really great piece with Paul Maurice, Brandon Sutter, and Cam Ward adding what they know about #53: TSN.ca Video : Eye of the Storm As teams head into the All-Star break, one member of the Canes has come further than anyone.

[For the record, I have never been more frustrated that TSN.co does not provide embed codes  for the videos - you really must go see all these out-clicks from the weekend]

Stealing the show on the red carpet with Jeremy Roenick and Kevin Weekes.

The Jersey switch with PK Subban

After the game, the N&O's Chip Alexander tweeted:

@ice_chip: Skinner had fun tonight but said "I've been smiling so much my whole face is hurting."

and then followed up with a story about how this weekend was going for Jeff as of Saturday night at Canes Now - Subban leaves Skinner speechless, jersey-less

Skinner said the past few days had been a bit draining. He noted he went to a late dinner with his father, Andrew, on Friday night after the fantasy draft. "We didn't talk the whole time," he said.

Another must-see focus piece from CBC.ca's HNIC Video Player, talking with Skinner on the bench during the game, and includes some background biographical footage of him figure skating that we haven't seen since June, right before pick number 7 of the 2010 NHL Entry Draft.

Mic'd up with Jeff Skinner during the game - NHL VideoCenter

Immediately following the game, the Canes'  Mike Sundheim tweeted the image below as visual evidence to support another announcement: The stick used today by youngest-ever #NHLAllStar Jeff Skinner is heading to the Hall of Fame 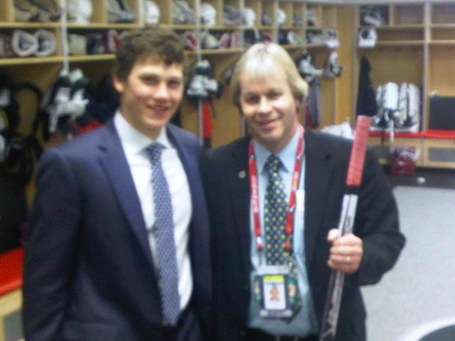 We hear that Skinner, Staal and Ward were given the day off from practice today. However, Skinner came in to be photographed on the ice for ESPN the Magazine's "Next" Issue. Mike Sundheim tweeted that he was giving them some trouble:

On the red carpet grinning ear-to-ear, McBain is happy to throw Skinner "under the bus" for the rookie's fashion lapses.

McBain contributed to Team Staal during Saturday's relay skills competition. His ability to accurately shoot the puck into those mini-nets demonstrated his Captain recognizes he can indeed pass like an angel. I'd love to see this again on video. If anyone can find it or make it let me know.

It was a little confusing to have multiple players with the same number on each team. Jeff Skinner skated on a line with two players wearing 26: Patrick Elias and Peter Stastny. Even more amusing, to the RBC Center crowd, a pair of 26's looks like two Erik Coles.

Can't overlook this moment either: Carolina welcomes Laviolette back with open arms - NHL.com Peter Laviolette will always hold a special place in the hearts of fans of theHurricanes - a Stanley Cup championship will do that for a head coach..

Audio links from this afternoon

Huge thanks to Raccoon Fink for capturing these three mp3's for us!

Audio of Jim Rutherford with Joe Ovies and Adam Gold late this afternoon talking about the weekend past (about 12 minutes). Among a number of interesting insights Mr Rutherford shares is this measure of success: The NHL targeted 15,000 attendance for the Fan Fair. The first 2 days had 23,000. It appears Raleigh exceeded expectations.

Audio with John Forslund on the David Glenn Show (of 99.9 the Fan) this afternoon discussing the significance of the weekend both locally and across the League. (about 12 minutes)

Audio with Luke DeCock speaking with some Canadian sports radio folks up on Team 1040 in Vancouver  (about 12 minutes, with comments on Eric Staal beginning around 5 minutes that I found the most interesting)