The long term relationship of 21-year-old forwards Zach Boychuk and Zac Dalpe with the Carolina Hurricanes organization grows more promising with each game. However the choices being presented to GM Jim Rutherford in the near term are growing more complex. Solution: take it one day at a time. The decision today is that the Canes threesome with injuries listed as "day-to-day"  (Jiri Tlusty, Joni Pitkanen and Jussi Jokinen) would remain in Carolina for the next two road games while the call-ups from Charlotte, including defenseman Brett Carson, would head to New York to take on the Rangers tomorrow night, and then continue to South Florida for a re-match with the Panthers Friday. On Saturday, the team will then re-evaluate and determine where everyone goes from here. And the clear message underneath it all: "Assume Nothing". Now the fun begins.

A couple stories  came out today on the process and the priorities regarding Boychuk and Dalpe and management determining which players are best suited to help the Canes win games:

Boychuk, Dalpe Earn Jobs for Now - Paul Branecky, Tracking the Storm Blog Coach Paul Maurice was facing a difficult decision on whether to keep using Zach Boychuk and Zac Dalpe or sit a veteran. Or, maybe not.

Here's 6 minutes of Audio with Paul Maurice before heading to New York which includes comments that are the basis of Branecky's post, and also include Mo's take on last night's game, looking to the Rangers, and his moves among the forwards.

From Monday's N&O (print edition), Boychuk takes advantage of his chances - NewsObserver.com The Carolina Hurricanes were playing the Toronto Maple Leafs when Zach Boychuk got a tap on the shoulder from coach Paul Maurice.

One Ontario newspaper talks with local kid Zac Dalpe after he tallied his first NHL goal vs the Devils this weekend: Dalpe starstruck with 'Canes | Toronto Sun For many young hockey players, making the NHL is the ultimate dream and Paris native Zac Dalpe is doing just that. After dressing for the NHL’s Carolina Hurricanes in October, Dalpe’s living big and taking it all in, one game at a time.

After the jump, lots of All Star Game announcements,  more local links and some video and stories from around the hockey blogosphere.

I highly recommend this terrific audio of Erik Cole on NHL Live before the team headed to New York this afternoon. (about 12 minutes). They cover everything from Carolina fans embracing the ASG, to the rookies, as well as his take on the team.

Recap from last night's game: Florida ends Canes' win streak -  NewsObserver.com The Carolina Hurricanes did all they could Monday to try and put a positive, glass-half-full spin on a 4-3 overtime loss to the Florida Panthers.

While we're discussing where to play the Canes slew of talented forwards. Skinner Stays Strong at Center - Paul Branecky, TTS Blog It can often be difficult for a young player to learn new positions, but Jeff Skinner has shown no ill effects throughout this season.

This came out Saturday after practice: Boychuk describes his impression of the visit made by Rutherford to the Canes dressing room during the game in Toronto last week:.

This is a repeat from Bob's recap last night - but I want to be sure you didn't miss this postgamer with Boychuk discussing how he approaches the game at the NHL level. He's not a rookie anymore.

in New York and a look at how they're managing one of their best young players, defenseman Michael Del Zotto.

Switch on defense all about future - New York Rangers   Michael Del Zotto, who played in Sunday’s 3-0 loss to the Florida Panthers after being scratched in four straight games, has scored two goals and totaled nine points in 35 games this season with the Rangers. Last year the Rangers’ first round pick in the 2008 draft appeared in 80 games, notching 37 points -- tops among all Blueshirt defensemen.

Rangers demote Del Zotto, call up McDonagh Michael Del Zotto - last season's power-play quarterback for the Rangers who had 37 points and made the all-rookie team despite finishing at minus-20 - was demoted Monday and Ryan McDonagh was called McDonagh, 21, who is more of a physical, stay-at-home defenseman and who arrived with Chris Higgins and Pavel Valentenko in the June 2009 trade for Scott Gomez, will not play Wednesday against Carolina, Tortorella said. Matt Gilroy will be back in the lineup.

At noon today we learned that four Pittsburgh Penguins and two Chicago Blackhawks were the first six players named to the games' 42-man roster. :yawn:  However, plans for the three-day weekend in Raleigh, and the days leading up to it were filled with intriguing moves and details as the NHL's architect of the new format, Brendan Shanahan, introduced many new ideas that will set this All-Star weekend apart from anything the League has done before.

"You've got players picking teams and players shunning teams, and you want them to go out the next day and sort of feel like, 'Hey, I'm happy to be here, we're all here to have a good time -- but you punk, you didn't choose me and I want to beat you.' " -- Brendan Shanahan

I'll be putting together a few charts to see how the electorate voted over the entire 8 weeks, but here's a teaser showing the bi-weekly progress of the seven top vote getters on the Carolina Hurricanes, including the late surge for Cam Ward and those phemonenal numbers for Riveting Chad LaRose . (Click on image to see at full size) 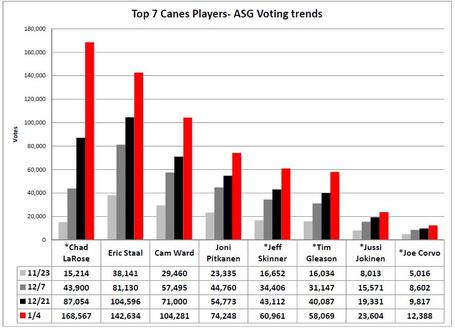 Another great installment in the "30 Thoughts" series from CBC.ca's  Elliotte Friedman: Reluctant Boudreau preaching trap, plus 30 thoughts which includes this at #3:

3. Jim Rutherford - a huge fan of Alexander Ovechkin's - believes Ovechkin is making a conscious effort to save himself for the playoffs. The Great 8 denies it, but Rutherford isn't the only one who feels that way. One of the reasons I think the Hurricane GM may be right: when asked about his lower goal totals, the Russian forward said, "It can change like that" and snapped his fingers. It would be foolish to write him off.

Thanks to Cory Lavalette on twitter at @corylav, here's a suggestion for 2011 from Sportsnet's Mike Brophy : NHL New Year’s Resolutions - sportsnet.ca

Brandon Sutter: Take my place among the best up-and-coming young forwards in the game.

And looking at what's next in Newark: For Lemaire, back to basics with the Devils | StarTribune.com The ex-Wild coach answered the Devils' S.O.S., but the reclamation project has been daunting. And this: The unthinkable has arrived: Martin Brodeur will share Devils' goalie duties | NJ.com as Johan Hedberg will start vs. Minnesota Wild

On Frozen Blog › Mathieu Perreault's Diary: A Hockey Mom Reacts to the Sight of Her NHL-Battered Son

I remember how the hit happened. I angled around the boards and I thought I could chip the puck by but from the corner of my eye I saw [Gleason] coming. I thought I could step by him. But he got just my head, and my head was down a little on the play. I don’t remember much after the hit. I don’t really remember what hit me. I saw the replay, and I thought it was a fairly fair hit. It’s not dirty hit.

The Blackhwaks Mom's Trip with Andree Gilbert and Donna Kane:   Jonathan Toews' and Patrick Kane's mothers tell us about the Mother's Trip with their famous NHL sons last weekend. Anyone else agree the Hurricanes MUST DO THIS ?

O'Sullivan playing to impress again | StarTribune.com "At times he just looks unemotional and lacks the drive, the push, the passion that most players have," said coach Todd Richards on Monday in Columbus, Ohio.  Patrick O`Sullivan said he feels he played too emotionally earlier in his career and has worked to "cut a lot of that out."

Michael Leighton clears waivers, will be a Phantom again - Broad Street Hockey Hard to imagine a a life that's more of a roller coaster than that of former Canes goaltender Michael Leighton. Here's video with Leighton this afternoon from the Flyers site as he headed down to the minors.

This is the Carolina Hurricanes Guardian. Thoughts?

THE HURRICANE: A barometric nightmare with a personality as wild as the weather patterns he commands.

Finally, this may be the next viral video for the NHL. Excellent. Enjoy  "This is SportsCenter - Alexander Ovechkin The Spy"