Share All sharing options for: ASG Fans' Final Tally, Illustrated: Beyond the "Top 6" of the 2011 NHL All-Star Game voting

The votes are in from the fans deciding which hockey players they want to see in the  2011 NHL All-Star Game. The results come after eight weeks of virtual ballot box stuffing, somewhat confused by the new game format that resulted in less influence by the fans (and fewer votes), and was even compromised by the prevalence of some players' names making easy text voting cumbersome for some (eg Kane, Staal, Ward)  but not others (eg Toews, Letang, Fleury). This past Tuesday the League announced which six hockey players will be coming to Raleigh January 28 through 30, and it was surprising, but not really, that out of thirty NHL clubs, only two, both in the US, had players among those first six. A big Carolina welcome to the Pittsburgh Penguins and the Chicago Blackhawks with all their tremendously skilled players, and even more tremendously crowded bandwagons of fans.

But what happened beyond these new levels of skewed results that the rest of us might like to know? And what did we learn about the new format, with the details further clarified Tuesday, that will undoubtedly take this 2011 All-Star Weekend into territory we have never seen before?

Six weeks ago, I took a look at the early returns in "Your Illustrated Guide to the NHL All-Star Game Vote Totals". Now, I'm re-visiting those charts, updated with the latest counts, to see which of the early trends held and which soared or sunk as the 2010-11 season went grinding on, with injuries, slumps and streaks making headlines. We'll also look on what happens next, and whether your Carolina Hurricane netminder Cam Ward  and his fabulous December was good enough to make the cut. 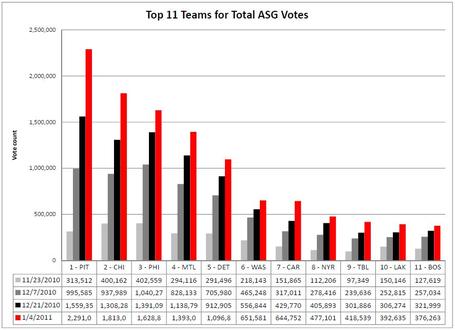 The total votes cast for the Top 11 vote-getting teams, in  2 week intervals.

This first graph shows the teams that received the most combined votes for their players. Since November 30, Pens' fans were virtual voting machines, lifting the total for their favorite players from 3rd to 1st, way past those from Chicago and the Philadelphia Flyers, with nearly 2 million additional votes in these last six weeks. Meanwhile, Philadelphia dropped from first to third. Those ranked fourth through seventh stayed in identical spots, though Carolina's late surge got them within 1% of the Washington Capitals. In six weeks, the New York Rangers and Tampa Bay Lightning each jumped up three spots ahead of the Los Angeles Kings and Boston Bruins contingents.

Next Tuesday, January 11, the NHL's Hockey Operations group will announce the remaining 36 players and 12 rookies who will be invited to attend the festivities in Raleigh. Breaking them down by position, there will be  21 forwards, 10 defensemen and 5 goalies on that list of the veterans. Here are some of the names they'll be looking at. Or not. 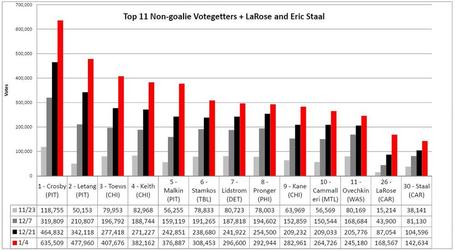 While the cynics amongst us rolled our eyes when only two very predictable teams made the top six, maybe we can feel a bit better about the process to see that the challenger to the Crosby/Ovechkin duality, Steven Stamkos and future Hall-of-Famer Nicklas Lidstrom were serious contenders.

I also feel confident that Patrick Kane would have done better than ninth if 1) he had not been injured for much of the voting and 2) Evander Kane didn't spell his name the same way. All of us who encountered the hassle of text voting for a player named Staal, Ward or Jokinen can attest to that flaw in the system.

Alex Ovechkin's precipitous drop from the initially surprising low rank of 8th in November even further down the foodchain to 11th in the final count might be a message his PR people can ruminate on going forward.

Here at home, Chad LaRose came out of nowhere the last six weeks, helped by text voting efforts, to knock Eric Staal out of the top spot for the Carolina club, with 80,000 votes in just  the last 14 days, a number comparable to super-star Stamkos, who himself singlehandedly carried the Tampa Bay team from 11th to 9th overall. Wow, Rosey. That is riveting.

If you're wondering, Sean Avery finished two spots ahead of Chad LaRose, and was 24th among skaters. Here's the NHL.com story of all players' final totals, listed by position.

Now, here are the top goaltenders, separated from the skaters because, with only six chosen for the two All-Star teams, this is clearly the highest bar for a NHL player to reach this year. One has been chosen by the fans, Marc-Andre Fleury, so only five more can join the party. Hockey fans in Carolina are well aware that Cam Ward is playing at perhaps the highest level of his already remarkable career, and his stats in the last six weeks have been the best among the competition. Will those 33,281 votes in the last 2-week push be a consideration for the Hockey Ops group making the final choice? 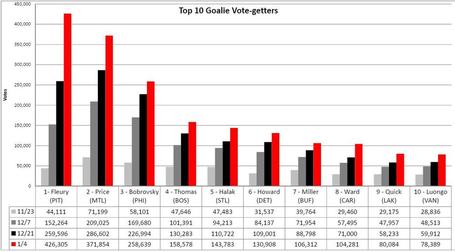 With Fleury in, the numbers game becomes part of the prediction process. I have my doubts Fleury would be joining Crosby here in January if his fans hadn't voted him to the top. We have to remember that each of the 30 NHL clubs will send one player representative, (which could possibly be one of the 12 rookies). Therefore, we have to look at the whole picture of 36 players and 12 rookies to determine what Cam Ward is up against. Ryan Porth, over at his blog Red Light District, posted a story which did just that:

Filling Out the All-Star Rosters which notes that it is possible Ward may be among a few deserving goaltenders who are snubbed, writing:

Many goaltenders were snubbed due to the 'numbers game'. Jaroslav Halak and Tomas Vokoun may not have made it otherwise, but were the only representative from their team. Guys like Ondrej Pavelec, Cam Ward and Roberto Luongo got the shaft because of this.

I'll add a couple links below which assume Ward stands a better shot than Ryan Porth's process of elimination projects.

Q: If you're are an All-Star captain and it happened to come down to choosing either Cam Ward or Marc Staal, who would you take?

Staal: (Laughing) Cam Ward, for sure. Marc Staal would be real near the bottom if he's in there, for sure. He'd be a first-timer so he'd be at the end, for sure.

And over at the ESPN blog, "Cross Checks", Pierre LeBrun and Scott Burnside have Wardo in their pool as the two "play captain and pick our All-Star squads"

We'll find out next Tuesday if Cam Ward will be among those invited to take a spot in the fantasy draft on January 28th. 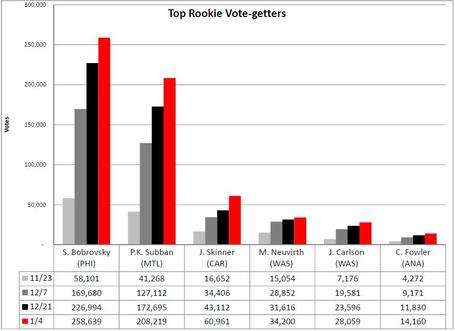 Rookies who received votes (all write-ins)

Safe to say all six of these will be included in the All-Star activities, though I haven't heard mention how many goaltenders might comprise the 12 selected. Didn't everyone expect that fans of the San Jose Sharks would surely get December's rookie of the month Logan Couture on this list?

One detail released Tuesday, and one that I liked, was the procedure by which the rookies would be aligned with the teams for the Skills competition. As it was explained here, the rookies are not selected by the captain. Instead, the kids will be empowered to select to join up with the veteran team they think (after 15 rounds, with 3 rounds remaining) will give them the best shot at winning the weekend. Sample scenario: Would/could/should Jeff Skinner possibly choose the team not captained by (or including) Eric Staal?

The 12 Rookies participating in the SuperSkills will be divided by the NHL into two groups of six. At the completion of the 15th round of the Fantasy Draft, one NHL Rookie will be selected to choose which All-Star team his group will join for the skills competition.

After all of the NHL regular-season games are played through Saturday, Jan. 8, the head coach of the team with the highest points percentage (points earned divided by total possible points) in each conference will co-lead the other All-Star team. The coaching staffs will be designated to each captain via coin toss before the NHL All-Star Player Fantasy Draft.

Three weeks from now Raleigh, North Carolina becomes the "Center of the Hockey Universe", if just for fifty hours or so. Who saw that coming ten years ago? With this entirely new and highly creative All-Star format, the details of the game and the two competing teams, as well as the timing and sequence become part of The Event, and a measure of its success. How this process plays out, both the successes and the failures, is something everyone in the puck world will be watching. Carolina hockey fans will have a front row seat to the action.