The Road To Raleigh: Checkers Stumble A Bit- Drop Three of Four

Share All sharing options for: The Road To Raleigh: Checkers Stumble A Bit- Drop Three of Four 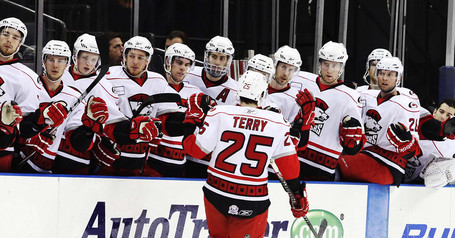 (Chris Terry celebrates a goal at home, via Gregg Forwerck)

The Checkers took a look at this week and knew it wouldn't be any easy one, especially with two back to back games against East Division leading Wilkes Barre/Scranton. Charlotte hadn't seen Wilkes Barre since their two game set that opened up the regular season home schedule for Charlotte back in October.

With the Junior Pens blowing in, and matchups with Albany and Springfield on the slate, how would the Checkers hold up? Would Jerome Samson continue his torrid scoring pace? Would Charlotte goaltending be up to the task? It was a week of rather unlikely goal scorers for Charlotte, find out more after the jump.

After a successful post-holiday break that saw the Checkers win three out of four games, the high scoring Penguins roared into the Time Warner Cable Arena looking to silence the scoring sticks of Charlotte. Wilkes Barre was simply the better team in the first meeting on Tuesday night. The Pens scored once in the first period, and once in the second to take a two goal lead into the final period. The Checkers defense unraveled quickly however, and allowed two odd man rushes in the span of one minute- leaving goaltending Justin Pogge out to dry for two quick scores to put the game virtually out of reach. Jacob MicFlikier and Michal Jordan tallied powerplay goals in the last 5 minutes to set up an empty net flurry down two goals late. Jordan's goal was his first of the season, and Jon Matsumoto assisted on both goals. 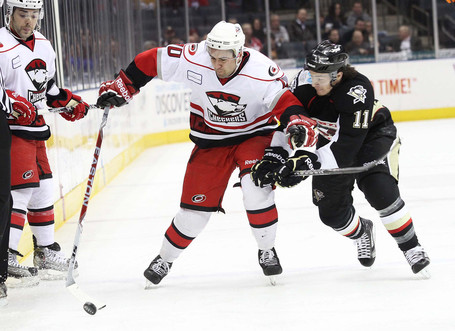 (Jon Matsumoto in a puck battle, via Gregg Forwerck)

Wednesday's game against the same Penguins had a different complexion. Chris Terry and Jerome Samson lit the lamp for Charlotte, while Ryan Craig and Chris Collins did the same for WBS. The game went to a shootout where Chris Terry started things off with a bang, scoring in his first attempt, only to see Justin Pogge get blown away, allowing three goals on three WBS shooters. Drayson Bowman, Riley Nash, and Jacob MicFlikier all shot for Charlotte, and shot wide.

In Albany, it was a coming home party for some Checkers players who were previously River Rats. Perhaps alternate captain Nicolas Blanchard felt compelled to score in his old stomping grounds, and he did. The goal came less than five minutes into the first period and was the tough customer's second goal of the season. The usual suspects- Terry and Samson scored in succession for Charlotte, before Brett Sutter added an empty netter- his third goal of the season. 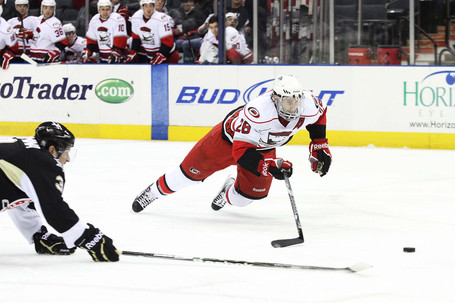 On Saturday, the Checkers suffered a big loss to the Springfield Falcons. Justin Pogge was touched up early- allowing two goals on the first 10 shots of the game- and was pulled for Mike Murphy. Murphy struggled too, allowing five goals on 20 shots.

Is it safe at this point to declare the Penguins this year's Hershey Bears? Will regular season dominance once again pave the way to a Calder Cup? Only time will tell, but after watching them live again, I've got to say, that is a great set of prospects the Penguins of put out there. Most notably impressive to me was center Dustin Jeffrey. Of course, Ryan Craig and Tim Wallace aren't slouches either. Goaltender Brad Thiessen is very fundamentally sound, and is a good puck handler. It's always great to see ex-Hurricane Jesse Boulerice too. Jesse was up to his old tricks as he picked up a game misconduct for abusing officials in Wednesday's game. Good ol' Boulerice.

There is still some separation between the top four spots, and Binghamton, but they refuse to go away as they are only six points back of Hershey.

On an attendance note, take a look at the numbers for the Checker's game against the Albany Devils. Albany drew just over 2,000. They are last in American Hockey League attendance with an average of 2,680. Hershey leads the league with an average of over 9,000 per game. Big shout out to the Chicago Wolves for drawing a whopping 15,654 on Saturday night. Charlotte is currently 9th in attendance, just behind the Lake Erie.

* In case you missed Clicks and Clippings, Mike McKenzie of the ECHL Everblades was named ECHL Rookie of the Month. Also, as HM pointed out- this Friday's "Race Night" event at Time Warner Cable Arena is supposed to be big. From what I hear, a turnout of well over 10,000 is expected to join Joey Logano and the Checkers as they take on the Monarchs. If you wish to buy tickets, be sure to enter the promo code- "ZACH". Six dollars from each 15 dollar ticket sold will benefit the Bennett family. Zach Bennett has neurofibromatosis- which causes his body tissue to grow tumors. Proceeds will help the Bennett family relocate from Albany to Charlotte as they seek better healthcare.

* Michal Jordan hadn't scored a goal this season prior to this week- he has now scored two. His two goals this week were complimented by an assist. The defenseman was showing some offense this week.

* Jacob MicFlikier scored a goal against WBS and added an impressive four assist for five points in four games.

* Chris Terry was held goal-less in the first meeting against the Penguins, but scored in the next three games. He had three goals on the week.

* Jerome Samson, the team leader in goals, scored two more to give him 20 on the year.

* Samson, however, had a rough night against Springfield. His -4 rating was a team low, as he was held point-less. 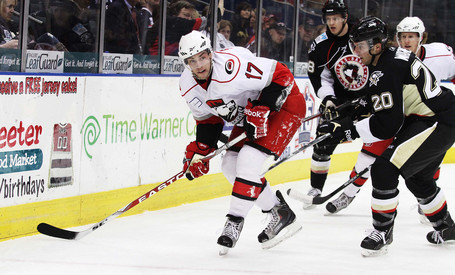 (Jerome Samson along the boards versus WBS, via Gregg Forwerck)

* Pogge was pretty good against the Penguins. His shootout prowess could use some work though. Three Penguin shooters all scored in succession in the shootout on Wednesday. If you thought it was just the Penguins, he also allowed a goal on a penalty shot by Albany's Michael Swift on Friday. Other than the penalty shot though, Pogge played Albany well, leading the Checkers to a victory. Murphy and Pogge had collective rough nights against Springfield as we discussed earlier.

* Riley Nash was rewarded with a goal, his eighth of the season.

* Cedric McNicoll got himself two assists in his two games since being called up from the Everblades.

It was a rough week, but securing a point like the Checkers did against Wilkes Barre on Wednesday is big. With three out of eight points on the week, the Checkers look to get back on track this week, and keep pace with the top teams in the division. Life without Dalpe and Boychuk for Charlotte isn't easy, but it has put a larger spotlight on Samson and Terry, and they have responded by scoring regularly. Oskar Osala, Riley Nash, and Jacob MicFlikier are capable of providing solid secondary scoring. Race night is going to be a good time this coming Friday. As stated before, if you haven't checked it out, HMo2's Clicks and Clippings has some great videos and resources on the Checkers, and other good information, quality work as always.

This coming week is a big one for the Checkers. Two matches with the Norfolk Admirals loom. When the Checkers and Admirals meet, it's always a good time. Tune in on AHL Live if you can. Sandwiched in between the two matchups with Norfolk is a back to back against the Manchester Monarchs, including Friday's "Race Night" game at Time Warner Cable Arena. Manchester leads the Atlantic division with 50 points- the Checkers will be challenged in the coming weeks, including this one.

An afternoon Sunday affair means a late Road to Raleigh entry. Look for the entry to be posted between 10 and 11 P.M. on Sunday.

Last week, we took a quick look at Justin Pogge's career in junior a few years ago. The Calgary Hitmen narrowly edged the Lethbridge Hurricanes for leading selection. That's correct, Pogge played two seasons with the Prince George Cougars, and two seasons for the Calgary Hitmen before joining the AHL's Toronto Marlies.

Let's take a look at who has spent the most time in the sin bin this year for the Checkers... some tough customers who love to hit highlight the Checkers 4th line, and defensive pairs. Brett Bellemore... Zack Fitzgerald.. Brad Herauf.. Brett Sutter? Who has picked up the most penalty minutes? 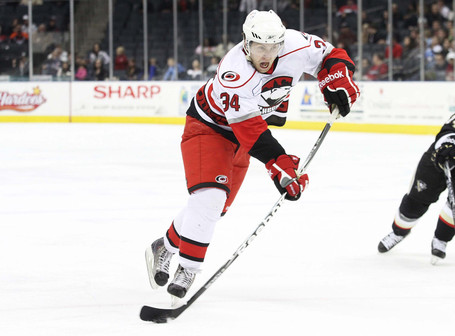 (Brett Bellemore prepares to fire a wrister. Bellemore adds toughness to the Checkers D-corps along with Zack Fitzgerald, via Gregg Forwerck)