The Carolina Hurricanes jumped out to a quick lead on Sunday afternoon in front of 17,907 at the RBC, then held on to win in the extra period as they defeated the Atlanta Thrashers, 4-3 in OT.

Erik Cole scored the game winner as he fought his way to the front of the net and somehow got the puck past goalie Ondrej Pavelec.  It was a fitting end for Cole, who had a goal taken away in the second period when he was called for interference. 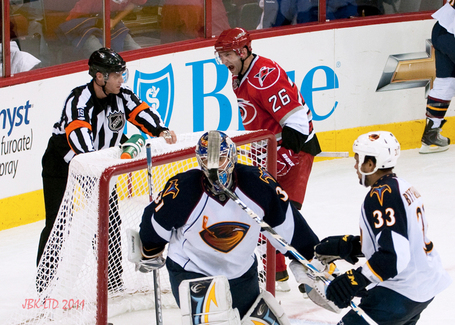 After the game, the winger was asked about the call and just said the refs will miss one from time to time, but he didn't feel that he hit Dustin Byfuglien hard enough to warrant a penalty.

The Hurricanes finally got the fast start they were hoping for when Tuomo Ruutu knocked in a goal off a nice pass from Joe Corvo, just 1:20 into the game.  The goal was a powerplay tally, the first for the Canes in three games.

The Thrashers would tie things up later in the period as Bryan Little fired in a powerplay goal of his own.

With the score tied 1-1 early in the second, Zac Dalpe used his speed and beat the Atlanta defense down the ice.  Patrick Dwyer led him with a perfect pass and the rookie used his skill to chip the puck in the net to make it 2-1.

Less than two minutes later, Jeff Skinner rifled in a long rebound on another powerplay chance for the Canes and it looked like the home team might run the visitors right out of the rink.

It appeared as though the Canes scored again as Cole got one in through a lot of traffic in front of the net, but the refs called no goal and gave the Thrashers a powerplay instead.  Shortly after, Niclas Bergfors shot one past Justin Peters to make the score 3-2.

That was a huge turning point in the game as it took the wind out of the crowd and the Hurricanes.

The teams played evenly much of the rest of the way until Bryan Little got past the defense on a breakaway and roofed one over Peters to tie things up about midway through the third.  Again, the Canes lost their jump here and the Thrashers controlled play for a bit, but Justin Peters and the rest of the team stepped up the defensive zone coverage.

Chad LaRose was called for tripping with 2:51 to play, but the Canes came up big and killed off the man advantage when they needed it the most.

In overtime, Carolina seemed more focused on getting proper line changes and they finally got a decent chance when Cole went down low and worked his way through a defenseman to get the puck on net for the game winner, 2:09 into the extra period.