Share All sharing options for: This Week in Hurricanes Photos: Practice, Senators, Blackhawks

With the Canes back in town after their long annual road trip to avoid the State Fair, I finally had the opportunity to get back behind the camera lens at the RBC Center.

After the jump, some shots from the week in Hurricanes hockey, including photos from Hurricanes practice and from the games against the Senators and Blackhawks. 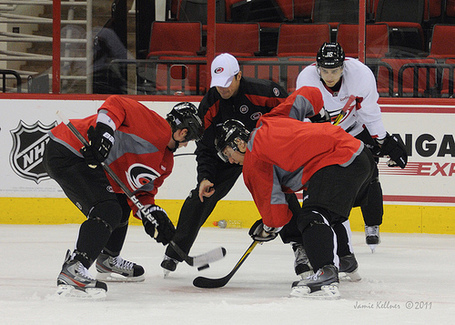 First, a few shots from the Hurricanes practice on Monday, October 24.  Justin Faulk was back in town (if only for a brief visit), and Rod Brind'Amour led faceoff instruction after formal practice broke up. 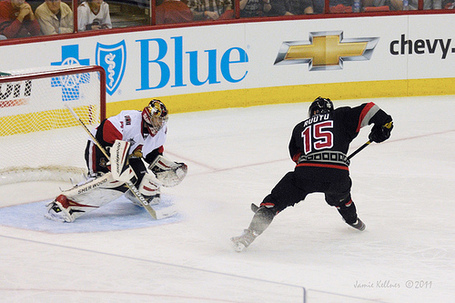 Second, Hurricanes versus the Ottawa Senators on October 25.  Come-from behind goals from Tuomo Ruutu and Jeff Skinner forced a shootout in a 3-2 loss.  Side note, even though this was Brett Sutter's fifth game on the Hurricanes roster, it was his first in front of the home crowd at the RBC Center. 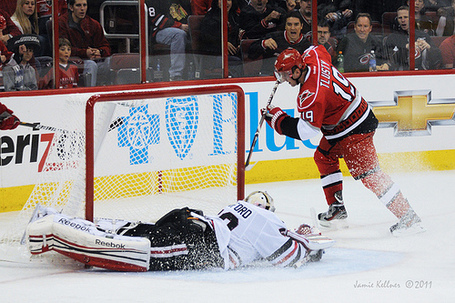 Last but certainly not least, Hurricanes versus the high-powered Chicago Blackhawks on October 28.  Goals from Tim Brent, Brandon Sutter, and Jiri Tlusty, along with an outstanding performance in net from Cam Ward, resulting in a 3-0 shutout for the home team.  Side note, appearance by former Hurricane Tommy Westlund (1999-2003) as the honorary siren sounder.