Clicks and Clippings: Something's gotta give

Share All sharing options for: Clicks and Clippings: Something's gotta give

Though the answers have been all over the map since the Carolina Hurricanes began to stumble badly in the last couple weeks, the questions continue to get more difficult and the need to solve them feels increasingly urgent. The buck stops with Jim Rutherford, who has been quiet since Monday last week when he told Chip Alexander:

"Now, if we're talking again in a six- or-seven game losing streak, I'll probably be in a different frame of mind and answer those (coaching) questions differently. Let's get back on track. If not, I'll look at all the situations differently."

Since then the Canes put up three losses (to the Devils, Rangers, Flyers) and the one win, Saturday, over the Penguins.

The dwindling ice-time given to the youngest members of the team has gotten so conspicuous that it's set off alarm bells indicating that the pressure on the coach is intense. Most of us seem to agree, it won't be long before something's got to give.

Point: Canes' youth not being served - Brian LeBlanc, Canes Country What in the world had Zac Dalpe and Zach Boychuk (and, for that matter, Jiri Tlusty) done to earn a total of ten minutes of ice time among the three of them? ★★★★★

Counterpoint: Next Day's Notes: Flyers-Hurricanes - Kurt Dusterberg, HurricanesBeat.com As much as I believe Boychuk has earned the chance to play on an NHL scoring line, I don't disagree with Maurice either. With Carolina in 13th place, there is no margin for error. Maurice's job, first and foremost, is to get the Hurricanes to the playoffs — not to develop Boychuk on the fly. If that means Boychuk must wait until someone falters, so be it. ★★★★

Wednesday night's game vs the Canadiens will not be broadcast locally by FSN, so plan on heading someplace with Center Ice if you want to watch it live. Hopefully, it'll be available in English.

"My answer is that everyone needs to relax," Cole said. "Eric is the type who puts a lot of pressure on himself at the start of each year and wants to come out the gate really, really hard and be the guy to carry the team...

"Maybe this year, with me not there or whatever, it's different. But Eric will be fine."

Radical Realignment in the works?

Ed Snider says "total realignment" is on the way | ProHockeyTalk What Snider means by that is that he believes the NHL will adopt a four conference setup, much like has been discussed already. ★★★

Here's a visual showing a possible throwback configuration:  Realignment revisited: Time for four divisions? - Carolyn Christians, RLDHockey The most radical plan under consideration was to return to just four rather than six divisions, perhaps with a bit of nostalgia for the days for when the divisions were named for League's founding fathers (Lester Patrick, James Norris, etc) rather than points on the compass. 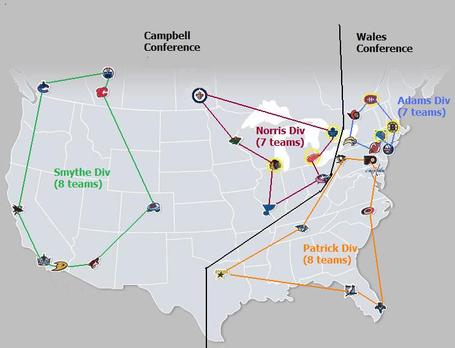 And while we're talking about maps and relocations: NHL Back In Hartford In Five Years: Crazy Or Brilliant? - Rick Green | CT Confidential ★★★ (via@RangerRick)

"I don’t remember too much of the hit," he said. "I do remember little tidbits. I remember coming off and telling the coaches I wanted to go back on." Murphy played one shift before Kitchener coaches sent him to the dressing room. "It was all my decision to go back on," he said. "I guess the coaches thought I looked out of it and sent me off."

26. Scottie Upshall on Panthers head coach Kevin Dineen: "He's like having an extra captain out there." You can see the difference in this team. Mentioned in one of last year's blogs that Dineen despises divers. He's told his players he will not tolerate it.