Share All sharing options for: Clicks and Clippings: Transition game

Two weeks ago, the Carolina Hurricanes 2011-12 Season was full of uncertainty.  And then it got worse. And worse again. While no one is pretending the team is out of the woods (especially if they are checking the Conference standings), at least this two-game win streak gives us a break from the free fall. Whether the Canes will complete this transition and put together a solid series of wins in what remains of the month of November is still to be seen.

Chip Alexander saw something symbolic in the highlight reel from the game last night: Like Skinner in Philly, Canes turning it around - Canes Now  As for Jeff Skinner's goal, ...suffice it to say he spun around Kimmo Timonen, leaving one of the league's best defensemen flatfooted, got off a shot and then poked in the rebound. ★★★★★

"Coming through the neutral zone, I didn't think I had any speed, so I tried to generate a little by turning it around," Skinner said.

Another look at that gorgeous move, plus updates on Ryan Murphy, more on Mo, Staal and Ward as Fantasy plays, and a little levity at the end (cause, Lord knows, we could use that around here.)

Because you can't watch this too many times: Jeff Skinner Spin-O-Rama Goal:

Looking at the Philadelphia Flyers postgame reaction, we've also seen this before. Hubris is a dangerous thing: Timonen: Flyers had 'no energy'  - Philadelphia Inquirer For the second straight game, the Flyers lost to one of the Eastern Conference's worst teams. ★★★

Another key component to the Hurricanes future is also in a much better situation than he was a few weeks back: Notes from the Kitchener Rangers - The Waterloo Record

Ryan Murphy looked sharp skating with assistant coach Troy Smith at the Aud Monday morning. The Carolina Hurricanes draft pick flew to Raleigh, North Carolina later in the afternoon to consult with team doctors. The 18-year-old was knocked out of action more than two weeks ago when he was hit by Niagara’s Tom Kuhnhackl at the Aud. He’s hoping to be cleared by doctors to return.

Pete Friesen said the extensive evaluation Tuesday would help determine when Murphy can return to playing.

"It's tough to say right now when I can play," Murphy said. "I want to get back as soon as possible but not at risk."

And from Kitchener this morning, Mike Farwell, @farwell590:

Luke DeCock covered the Canes for the N&O during the first Maurice tenure, stayed through the Laviolette turn at the wheel, before the beat reporter assignment was given to Chip Alexander at the beginning of the 2009-10 season. DeCock's voice continues to resonate with many in the hockey world as his focus on the Hurricanes has intensified again in recent months.

Amid all those similarities, the biggest change is the way fans feel about Maurice. Eight years ago, most fans didn't know any better. They had never known any other coach. Now, they have. They have seen the Stanley Cup. They're savvier about the game of hockey. And they're tired of all the losing.

Over the past few weeks, I notice Cam Ward is not as "set and ready" as usual. He’s sliding through his angles, pushing through his destination points, and moving a lot more than usual. This is due to a number of things, including a lack of confidence in – and support from – his defensemen, a lack of focus due to frustration and the internal pressure to win.

Canes vs. Leafs 11.20.2011 - Jamie Kellner. The set includes the celebration of the first Canes goal scored after being shut out for 154 minutes by none other than the Canes newest Norris Trophy candidate Jay Harrison, as rookie Justin Faulk gets his first NHL point with the helper. 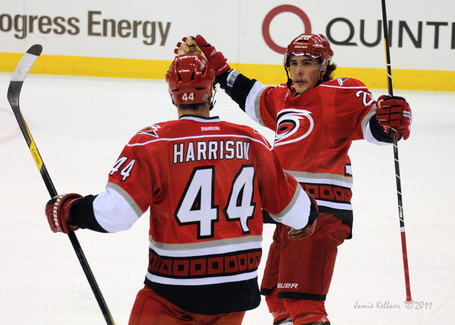 For the recent games (still in progress) check out: Jamie Kellner's Photo sets for the Carolina Hurricanes

Stats geeks have at it

Montreal Canadiens Erik Cole finally clicking with new linemates - Hockey Independent ★★★★ with a video clip (below) from the French broadcast captioned by a Habs blogger thusly:

Erik Cole is mocking his former teammate Tuomo Ruutu who was sitting in the penalty box after a tripping call. He also reminded him that he signed a four-year, $18-million free agent deal in the summer with Montreal.

Did you see this moment last Wednesday night? (I didn't) Do you think Cole is mocking Ruutu? Keep an eye out tomorrow night at the RBC Center for more teasing, and going both ways - which I don't for a moment think was (or will be) malicious.

The Charlotte Checkers and other Prospects

Boychuk Back Later than Expected - Paul Branecky, goCheckers.com "It was awesome," Zach Boychuk said of his most recent NHL experience. "I was expecting to go up for one game to fill in for Stewart, but one game turned into two and two turned into a month." ★★★★

In the pipeline: Keegan Lowe vs Cam Braes, Nov 19, 2011 - Edmonton Oil Kings vs Lethbridge Hurricanes - hockeyfights.com  (The Canes 3rd round pick Keegan Lowe is #4 in white) ★★★

Other NHL Coaches under scrutiny:

We're at the 20 game mark of the season. As happens every year, the head coaches of any and all teams that are not performing as expected are subject to scrutiny by the media. Here are five  for starters. (And this list doesn't even include the Islanders or Blue Jackets. Or the Hurricanes, for that matter.)

I clipped the phrases that seemed to me to echo local conversations. But please read the entire articles if you have the time. Maybe one of these guys will be available sooner than later?

Washington: Would firing Bruce Boudreau make the Capitals a better team? - Puck Daddy Wyshynski begins by telling the story of what transpired four years ago this week.

So McPhee fired [Hanlon], and he promoted a cherubic farm-hand from the AHL named Bruce Boudreau on an interim basis.

At the time, Hanlon's firing was viewed by veteran players as a result of their own failures. Said Olaf Kolzig to the Washington Post: "It was pretty evident what we were doing wrong, and we went right back out in the second period [Wednesday] and did the exact the same thing. That has nothing to do with coaching, and has everything to do with individuals not listening and being on their own program."

Speculation around the team is all about Joe Sacco, the club's third-year coach, because that's how it works in the NHL. Something wrong? Anything at all? Fire the coach. Hot dogs too cold? Beer too warm? Restroom lines too long? Fire the coach. Has Jacques Lemaire gotten bored with retirement yet?

In Montreal, Martin’s personnel choices and line-juggling puzzle some, enrage others. The can-do-better crowd would now have struggling Scott Gomez in the minors, Tomas Plekanec off the power-play point forever, and every observer can form four productive lines that can be rolled effectively.

Detroit: "Do we want to be a good team or not?" Yes. Yes you do. - Winging It In Motown

So does that mean the players have tuned Babcock out? That sure seems to be the prevailing thought, and that's going to be tougher to get back. Now is the time where you either show that you're the coach we think you are, the guy who can lead this team back to the promised land, or we find that you're simply a guy who inherited a great team and you've lost the room.

Calgary: Time Running Out For Brent Sutter? - The Hockey Writers

Troy Crosby doesn't pretend being Sidney Crosby's Dad is no big deal. He doesn't walk around with a sign, but he doesn't take it for granted. His daughter plays hockey at a high school in Minnesota, and Troy watches her whenever he can too, but it admits it's different: "She's a goalie, I'm a nervous wreck."

TORONTO - After performing an in-depth 15-year study of professional hockey penalties, penalization practices, and the behavior of penalized players, independent hockey-law reform group JustIce concluded this week that the NHL's use of the penalty box does "absolutely nothing whatsoever" in the long term to deter players from committing violations.

Thanks to the Canes own Michael Smith for the link: How to Pronounce Carolina Hurricanes NHL Hockey. He said his favorite was Zach Boychuk. And, yep, it's good. Personally, Chad LaRose got me giggling.  ★★★★★