Share All sharing options for: Florida at Carolina: Muller takes the helm

A little more than 24 hours after the news broke that Paul Maurice was no longer coaching the Carolina Hurricanes, the team was back on the ice skating with the new man who will guide them for the remainder of the season - and for a few years beyond 2012.

Kirk Muller's first pregame skate as the Hurricanes head coach lasted maybe 40 minutes and included a couple sessions at the white board and another quieter conversation with the team and assistant coaches on the far side of the rink, away from the benches and the press. Afterward he spent several minutes one-on-one with Eric Staal. Then he and Rod Brind`Amour put their heads together as the forwards worked on some informal drills.

After the jump, Jay Harrison still out, who is Andreas Nodl, and a series of photos from the skate this morning.

Jay Harrison, still day-to-day with an upper body concern, didn't skate with the team though he came out half way through to an ovation of stick taps and took some laps as he tests the injury. That left seven defenseman available tonight. When asked, Muller did not indicate which player would be the scratch.

Based on the line rushes this morning, the forwards will remain as they have since the win over Philadelphia 8 days ago. However, it wouldn't surprise me at all if the coaches decide to change things up.

Another wrinkle came at noon when the Canes claimed Andreas Nodl off waivers from Philadelphia. Nodl spent some time on a line with Mike Richards last year but has not played consistently for Peter Laviolette's Flyers this season. Word is that he is fast and has decent size, but would likely still be a defensive winger well-suited for a spot on the Brandon Sutter line. According to the Canes, he may arrive in time to play tonight and will wear #14. It would be a guess whether he would take Brett Sutter's spot as a depth forward.

In the Defensive pairings, they were matched up as they did vs Ottawa Sunday, with Derek Joslin, Bryan Allen, and Tomas Kaberle alternating. It was Tim Gleason - Justin Faulk and Joni Pitkanen - Jamie McBain as the top four.

Is it safe to assume Cam Ward will start, making his 6th in 10 days? He was the first one off this morning, so I say yes.

No time to stop and ponder

Another game tonight will get the nerves and uncertainty of the new guy's first day on the job worked through without time to waste. The Florida Panthers, coached by former Hurricane Kevin Dineen, are in town for the first meeting between the two southeast division clubs. The Panthers (12-7-4) are currently at the top of the division and third in the Eastern Conference.

The Hurricanes (8-13-4) managed just 9 points out of 30 in the last month under the former coach, and are winless in the last three. The word from owner Peter Karmanos Jr (and others interviewed today) is that the 2011-12 season is far from over and they intend to put forth every effort to reach the post-season by April. It's certainly possible, but hardly seems likely. At this point, there remains so much to learn about how quickly this group of players will come together under their new coach and if personnel changes on the ice are still to come.

According to the Canes media notes, Laviolette came up with a win in his debut behind the Carolina bench, getting a 2-1 overtime decision over the Pittsburgh Penguins Dec 18, 2004. Four years later, Maurice's return to Raleigh was a 5-2 loss on Dec 4, 2008, also to Pittsburgh.

For more on the Panthers side of the action, I highly recommend Litter Box Cats as the SBN blog for Florida, or head over to On Frozen Pond from the  Miami Herald's George Richards.

Jose Theodore will start in goal for the visitors.

Game time is 7pm with the Canes Country open thread and live blog starting about 30 minutes prior. Fox Sports will again have the television side while 99.9FM is the place to listen to Mike Maniscalco and Chuck Kaiton.

from practice this morning, courtesy of Jamie Kellner.

First white board session after a few laps and some line rushes: 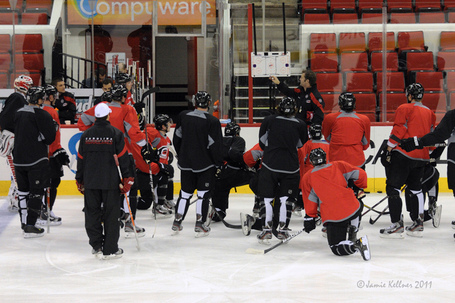 The beginning of  X's and O's, according to Muller 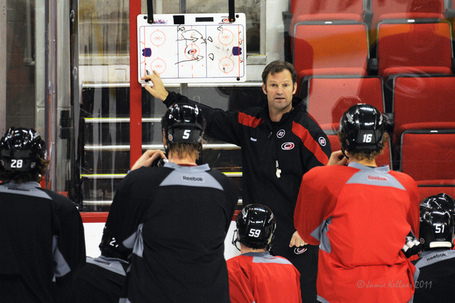 After the team drills were complete, Muller brought the team away from the benches and the press for a more quiet conversation that lasted several minutes. He was the only one speaking, but players were paying close attention, seemed to nod, offered a few smiles. 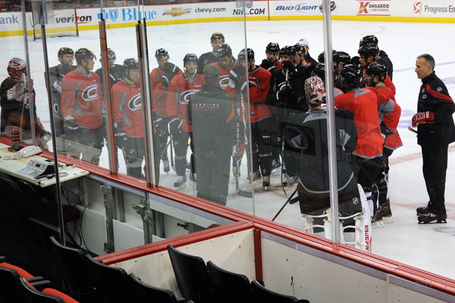 Muller and Eric Staal then took some time to discuss where they go from here. 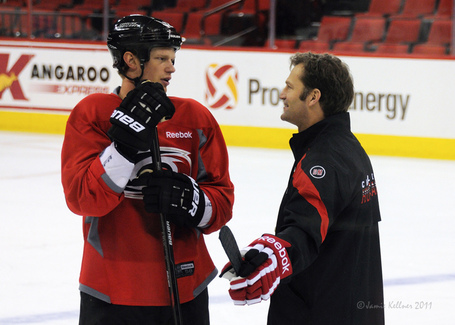 Rod Brind`Amour shared a moment with Muller as the players wrapped up the session individually or in smaller groups. 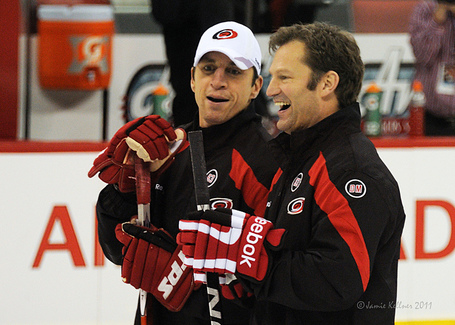 The News and Observer's stories, most recently

Canes get first feel for new man in charge - Canes Now - with plenty of player quotes from Jeff Skinner, Bryan Allen and others. Some idea of what was discussed between the coach and the captain as well here:

Muller and Staal talked about the forecheck and special teams and some small tweaks, but that wasn't all.

"I just said to him, 'I don't need you to be Superman,'" Muller said. "I told him, ''I just want you to go out here tonight and be my hardest-working player. Just play hard, have fun, enjoy the game.'

"If he's a better player, and 19 other guys out there are better tonight than they were yesterday, then we're a better team. He doesn't have to take the burden of having to do everything. ... All he has to do is go out and lead by example. Play hard, do the little things, great body language and have fun and just be the player that he is."

From the morning paper

Finally, there were another dozen reaction and analysis pieces on the coaching change from sources both local and far-reaching. I'll look to put those up later today for general perusal and posterity.