Share All sharing options for: Clicks and Clippings: Muller time

With the coaching decision made and the Kirk Muller era in Raleigh at hand, the news is flowing fast from the Carolina Hurricanes these days. Without further ado:

Today's practice and the newest of the new stuff

"He came into camp and he didn't prepare himself properly.. He enjoyed his summer..... I don't know what's gonna end up happening right now, we've got young players like Justin Faulk....Joslin. [Kaberle] may very well get lost in the shuffle..... He got off to a slow start, totally by his own doing, and now he's gonna have to figure out a way to get out of it or he won't be playing with the Hurricanes for long."

"We’ve got to work on it," Muller said of the power play in what was the understatement of the night. "A power play can give you momentum even if you don’t score on it. The tough thing tonight was we were so good 5-on-5 but the power play just didn’t create any momentum for us. We needed more net presence; we’re just out of sync."

And, lost in the bigger story behind the bench, let us not forget that the Andreas Nodl era began last night too. What he sounds like, describing his unusual day yesterday, Audio from Brian LeBlanc, 00:46 ★★★★ and what he looks like: 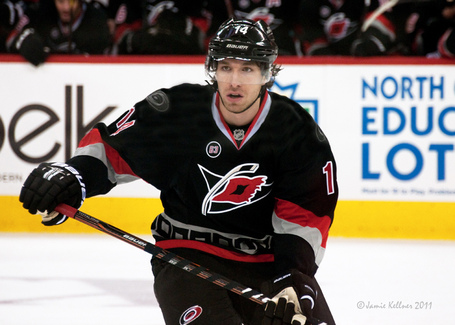 Reactions to the Carolina coaching change from near and far

Staal, for one, said had he gotten off to a stronger start this season Maurice's departure may not have been necessary.

"Naturally you're going to feel that," Staal said. "If things are different and I'm 20 goals into a season and we're five games above .500, then we're in a totally different situation. But we're not and I'm not."

"He took the fall for everyone," Allen said. "At the end of the day, it's the players in here who let him down."

The match-up between the two coaches was also unique in that it provided some immediate insight into potential changes in the organizational coaching philosophy. Daniels noted that he and Muller employed different styles of play in their three meetings this season, which could be significant as AHL clubs typically employ similar structures as their parent clubs so that prospects develop in a manner that will best prepare them to make the transition to the next level.

"It’s about culture and it’s about pride," said Muller, who is good friends with Ray Whitney. "At the end of the day, the teams I was able to be successful with had a real concern and pride to play for each other. It is a team sport and if everybody buys into the same philosophy, everyone has the same goals and everyone is willing to make the same commitment, it is really simple. It’s simple to say, but not always easy to do.

10) The Record: In the end, Maurice is a .500 coach who, to his credit, won himself a three-year contract with the team’s hot run near the end of the 2008-09 season. The reality is this: In the salary cap age, it’s much easier to fire your coach than trade under-performing players.

"It was different this time, though," the GM said. "The last time (in 2004), it was his first time (being fired). This time, [Maurice] was more of a veteran type who understood it better."

Rutherford acknowledged some responsibility for the team's early season woes too. With the fourth lowest payroll in the League, he knew there was little margin for error with his five free-agent signings in July, a group led by struggling defenseman Tomas Kaberle.

"Maybe I didn't bring in the right players," he said. "But you don't know that when you go into free agency, and we're dealing with the second and third tier of the free-agent group".

From the very funny Down Goes Brown, after the photo of Maurice's whiteboard message to Muller went viral in the twitterverse this morning: Of course, Bruce Boudreau did something similar for Dale Hunter:

It looks like Marc Staal will be traveling to Raleigh with the New York Rangers, though there is no time table for his return to playing. The Rangers are riding high after a decisive bout over the Pittsburgh Penguins at home last night:

Blueshirts United – "Killer Instinct" That was the message ...before the Blueshirts headed down to Raleigh for Thursday's clash with the Hurricanes. "It is vital to this team to not take it easy and not go lightly on an opponent that is maybe wounded and kind of weak right now," said John Mitchell.... "We have to keep the killer instinct going and go, go, go and go hard because every point counts..."

Don't forget Jordan Staal will be here Saturday. And we should probably bear in mind that back in August we learned that Eric and Tanya Staal were expecting their second child, in early December. So there's that, too.

Good to see him recovering ahead of schedule: Ryan Murphy on invitation to Team Canada Selection Camp - VIDEO from Kitchener Rangers ★★★★★

Victor Rask is expected to be named to Team Sweden in a couple weeks. Till then he's doing great things in Calgary for his WHL club: Road warrior mentality has Hitmen on fire - Calgary Herald - just for the ★★★★ lead photo.

Men's Ice Hockey November Recap : The Ivy League Harvard junior defenseman Danny Biega is tied with Cornell junior forward Greg Miller for the Ivy League lead in assists as both players have eight helpers on the season. Seven of Biega’s eight assists have come on the power play.

Stat check: Frölunda’s Frederik Andersen leads all goaltenders in save percentage with his 94.26%. His GAA, 1.58 in 17 games, is also the lowest in the Swedish Elite League.

The Business Of Hockey – Forbes.com has their "scorecard on the business of the NHL" with the Canes ranked 23rd out of 30, with a value of $58million - which is confusing to me, but there's no supporting explanation to the table I could find. Whatever the case, $58Mil bears no resemblance to the valuation of $240mil reportedly used when the new minority ownership group was brought in last this month. ★★★

**UPDATE Somebody fixed their error and the current value is now shown to be $159million. Another page on this is up here.

November 2011 Monthly Report - Tracking the Storm Looking back at the second month of the 2011-12 season for the Carolina Hurricanes. ★★★★

Skinner proving he is real deal - Patrick Hoffman, Red Light District When pundits expected him to hit a wall in his rookie year, Skinner proved doubters wrong. When everyone outside of Raleigh half-expected Skinner to suffer from a sophomore slump, he (so far) has proven those doubters wrong, too. ★★★

Now for something completely different

It's long, but worth your time, like meditation. A Theory of Ice: On Seeing ★★★★★

It’s just you and me here, now, on this blog, so let’s be honest with each other: we do not really want to watch hockey that way. That way of watching hockey is hard. You know how sometimes you’ve got a game on and the color dude is speculating about some potential trade and they cut to a shot of the GM sitting in some dull beige box, glowering down at the ice with an expression that somehow conveys both depression and constipation? That is what serious, analytical hockey-watching looks like. It is not fun.