Share All sharing options for: This Week in Canes Photos: Lightning, Caps, Stars

While this was not a banner week for the Hurricanes in terms of wins and losses, here's a look back at some photos from the past week, including games against division rivals Tampa Bay and Washington, a Sunday matinee against the Dallas Stars, and practice yesterday at Raleigh Center Ice. 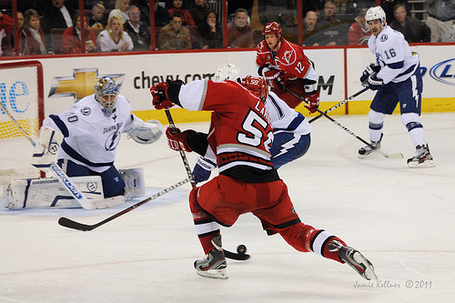 The week started off with promise as the  Canes dominated the Tampa Bay Lightning 4-2 at the RBC Center, led by two goals each from Jeff Skinner and Chad LaRose.  I feel a modest explanation as to this album, it was quite a night for my family as my son and a friend participated in two of the in-arena contests, then I was fortunate to snag an invitation for a ride on the Olympia during first period intermission.  So bear with me as I give you the "family slideshow" in addition to the standard game shots. 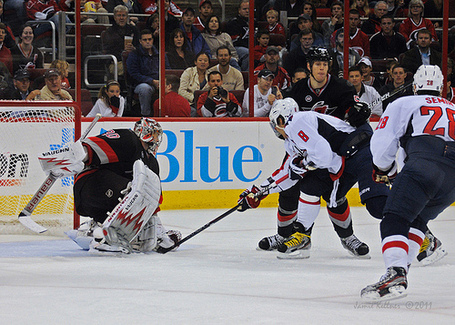 Not a lot for the home crowd to cheer about on Friday night as the Canes fell victim to the Washington Capitals 5-1 at the RBC Center. Drayson Bowman got the call to substitute for injured teammate Jussi Jokinen.  Anthony Stewart scored the lone goal. 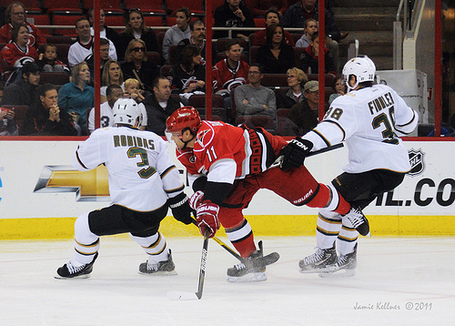 The Dallas Stars were in town on Sunday for an early afternoon matchup against the Hurricanes, who perhaps (?) forgot to set their clocks back for daylight savings time and found themselves on the wrong end of a 5-2 score.  Cam Ward started but was replaced in net halfway through the event by Brian Boucher.  Chad LaRose and Tuomo Ruutu scored the Hurricanes goals in what became a rather chippy cross-conference matchup. 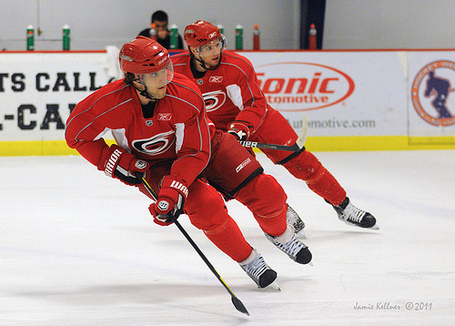 Following the weekend's lackluster results, the Hurricanes pushed back Monday's practice by a good 45 minutes while the team held a closed door meeting, followed by a vigorous practice at Raleigh Center Ice before heading to Newark for the next game against the Devils.