The Carolina Hurricanes 4 ½ - hour charter flight landed in Calgary a short while ago and the team is headed to an unusual late afternoon practice at 3:30 Mountain Time today. Tomorrow they face Brent Sutter's Calgary Flames, then head a couple hours due north (north!?) for the second of this back-to-back vs the youthful Edmonton Oilers. Friday, they're in Winnipeg and then, following a day off over the weekend in Toronto, they'll wrap up their Canadian tour in the Maple Leafs Air Canada Centre next Tuesday night.

Nine and a half days

Canadian road trip timely for Canes - Chip Alexander, NewsObserver.com ★★★★ "A lot of these guys will see their families and get some reassurance and comfort and all that," [Coach Kirk] Muller said. "But it's always good games up there. It's a good time to get the guys out."

Also per Chip, On Sunday, they will be at Ramsden Rink in Toronto for an outdoor practice, which could be a refreshing change. For more on this outdoor practice facility, here's the Maple Leafs' rink link. ★★★★

Travel key to realignment + 30 Thoughts - Elliotte Friedman, CBC Sports ★★★★★ focuses on what's new with Jim Rutherford. Including this proposal from the realignment debate:

"If we shorten the exhibition season, we could end the regular season a week and a half earlier," Rutherford said last Friday. "And that way, the first weekend would have the teams ranked 13 through 20 playing a best-of-five series."

He also addresses the longterm career paths for Rutherford and Ron Francis in #7.

7. Front-office rumour ..: That Rutherford will focus on the Hurricanes presidency and cede the GM job to Ron Francis. "That may happen at some point," Rutherford said. "But it's not just around the corner." He is skipping the board of governors meeting to go on Carolina's road trip that starts in Calgary and Edmonton. Those aren't the actions of someone planning on easing up.

More on the Canes, Flames, Checkers, and a visit from Santa and his helper get the Holiday season started right.

Other Hurricanes stories and such

Canes' lost culture not easily replaced - Luke DeCock, NewsObserver.com ★★★ Like Muller, changing the culture was a prime objective of Peter Laviolette when he took over in December 2003. He was successful to the point where Maurice could take over a Laviolette-coached team and take it on a long playoff run even after Laviolette was gone.

Staals remain as tight-knit as ever - Chip Alexander, NewsObserver.com ★★★★

No quick fixes for the Hurricanes - Luke DeCock, NewsObserver.com ★★★ But it does underline just how much work Muller has to do, just how weak this team is no matter who’s coaching it -- despite Eric Staal recording four points in the past three games.

Perfect time for a Northwest road trip - Matt Karash, HockeyBuzz.com ★★★ What say you Canes fans? Have you already started doing the research on who the top 5 picks are for next summer's draft?

Fire & Ice - Johnny Mac and Captain Kirk together again behind Carolina Hurricanes’ bench Q&A with these two from the perspective of one New Jersey Devils beatwriter who knows these two pretty well. ★★★★

The Flames may be even more messed up than Carolina

It was open season on Flames goalies last night | ProHockeyTalk Neither Henrik Karlsson nor Miikka Kiprusoff were spared being run over by oncoming Canucks forwards last night. ★★★ This afternoon we hear that AHLer Leland Irving recalled, Karlsson placed on the IR.

From the 5-1 meltdown vs the Canucks last night, check out Brent Sutter accepts fate, utters what all Flames fans were thinking | The Province specifically for this animated GIF. ★★★★★ (Really, you have to click on the GIF)

At 15-7-2 on the season, the Charlotte Checkers have won 6 of their last 7 going into tonight, and sit atop of the Midwest Division, and only one point in the standings behind the AHL's Western Conference co-leaders, the OKC Barons and Abbottsford Heat. Those Barons will be in town later this month by the way; they're the AHL affiliate of the Edmonton Oilers. Perhaps Linus Omark will be back in action?

The Checkers released this pretty awesome video from a practice hosted by Zach Boychuk. "Do you know the Muffin Man? Yeah you do" ★★★★★

Great look at the Canes top prospect Ryan Murphy and his ups and downs with Team Canada the last few years: Team Canada hopeful Murphy back from concussion - CBC.ca ★★★★★ Also a bit more on how his helmet has changed following last month's scary collision.

Murphy will look a little different on the ice as he has ditched his standard CCM helmet for Reebok’s new 11K model, designed to absorb the scary high impact hits. Reebok’s lightest and most protective helmet to date adjusts 360 degrees to a player’s uniquely shaped head and will not pop off once locked into place.

Love this video after his first game back last week, in which it becomes very evident he doesn't like to lose.: Post game video w/Ryan Murphy - Kitchener Rangers ★★★★ (And pleased to report he did score his first goal of the season this weekend.)

Perhaps Rask and Edmonton Oil King Keegan Lowe will get some time with the Hurricanes while they're near this week?

Finally, it was just announced that both Austin Levi and Justin Faulk have been invited to the U.S. National Junior Team camp for the World Juniors Tournament. [Full list] Like Team Canada and Jeff Skinner this year and last, USAHockey is aware that Faulk's services may be required in Raleigh hence making him unavailable to play with the kids. As USAHockey blogger Chris Peters just put it over at twitter: @chrismpeters:

Just as the last two years, USA named 29 players to camp. Justin Faulk's seat will be kept warm. They'll wait as long as they can for him.

Erik Cole paid for Louis Leblanc’s parents to see his first NHL game - Puck Daddy ★★★★ This was an interesting tale of the $18million NTC man.

What the NHL will lose in four-conference realignment - Puck Daddy The divisional playoff format has been romanticized to the point where we've forgotten its flaws: Inequity and predictability. ★★★★

Radical Realignment Could Boost Local, National Television Numbers for NHL - Steve Lepore, Puck The Media There are a lot of reasons to stick with the status quo, but to me, the benefits of giving every team an even playing field in terms of television ratings and attendance makes too much sense. ★★★

According to Bob McKenzie, it's looking like we might actually have a decision by 10pm ET tonight. Really.

Twitter / @TSNBobMcKenzie: There is a reasonable chance, if all goes well, that NHL realignment will be concluded by day's end.

Looking around the League

NHL coaches remain ‘hired to be fired’ - The Globe and Mail Today’s bench bosses increasingly have fewer levers with which to manipulate, motivate players. ★★★★

Who is the NHL’s sophomore of the year? - Puck Daddy Through the season's first quarter, it's clear that Jeff Skinner is the real deal, but if the Calder was a trophy you defend, would he retain it? Would one of last year's runners-up displace him? Or would it be someone else entirely? Here are my three early nominees for sophomore of the Year. ★★★★

Young gym rats taking over the NHL - thestar.com Includes a poll (so you can vote for Jeff Skinner!) and a Top 5 list of "the five best young players who have emerged in the last three NHL seasons". ★★★

And on the subject of National Rosters, Jeff Skinner and those ever-present Staal brothers, this story popped up just now: Team Canada set for drastically different look from Vancouver - Canadian Press in which the pundits choose to include Jeff Skinner but not Eric Staal. In fact, Staal things considered, they believe Jordan and Marc seem more likely than Eric, who will be 29 by the Sochi Games in 2014. ★★★★

Finally, in case you missed this Friday night, Anthony Stewart and then Patrick Dwyer were kind enough to tweet a picture of their own kids at the team's Annual Childrens' Christmas party with two special guests. @PattyDwyer39's yfrog is here. But for some reason, I kinda liked this one more. 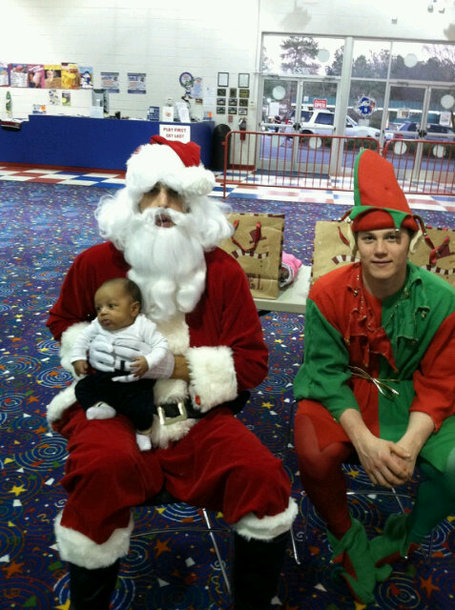