Share All sharing options for: The Road to Raleigh: Home Standing Checkers Take Care of Business 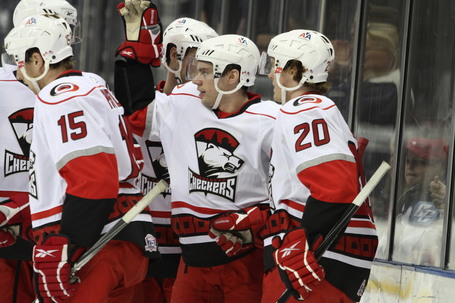 (Jerome Samson celebrates a goal with his teammates a few games before earning his first NHL call-up of the season, via Gregg Forwerck)

Last week, the Checkers enjoyed two games at home and came away with four big points over Norfolk and Providence. The home stretch continued this week as the Checkers hosted the Providence Bruins again, and then played the first two games of a three game set with the Albany Devils.

The Checkers roster has been anything but consistent over the past week or two. The injuries to Joni Pitkanen and Jussi Jokinen forced the call-ups of Zach Boychuk and Brett Carson. Zac Dalpe and Jerome Samson earned call-ups for Sunday's game against the Thrashers, which enabled the call-up of Mike McKenzie who had tallied 35 points in 51 games with the ECHL Florida Everblades. Matthew Pistilli has seen more ice time as a result, and defenseman Ethan Graham was added from the Everblades again. Graham is a -9 with four points (0g, 4a) in 19 games with the Checkers this season. After the jump, let's look past the roster-wide game of musical chairs, and delve into the results, and who was doing what.

Picking up points in this stretch of home games for the Checkers is key. With the Hershey Bears all of a sudden playing like the defending Calder Cup champions that they are, the Admirals keeping pace, and the Penguins leading the pack, points are at a premium this time of the year. The fan support was great for Charlotte this week as they attempted to thwart two teams in Providence and Albany who are below them in the standings. In three winnable games, how did Charlotte hold up?...

The Penguins continue to lead the way, followed by the Bears who were finally cooled down a bit over the weekend. Norfolk has slipped a bit over their last ten games, while the Checkers seem to be rounding into form at home.

*The Charlotte powerplay went 4 for 16 on the week

*Before his call-up, Jerome Samson scored a goal and notched three assists

*Jacob MicFlikier had one goal and two assists

*Brett Carson found his offensive stroke this week. He had two goals and two assists, and was the third star of Sunday's 3-2 win

*Zac Dalpe scored before being called up

*Mike Murphy was in net for both Charlotte wins this week. He turned away 31 of 32 Providence shots for the win on Tuesday. His shutout bid was broken 18:55 into the third period

*Justin Pogge was saddled with the overtime loss against Albany on Saturday night. He faced 27 shots and stopped 23 of them

*Zack Fitzgerald was physical as always this week. After laying out Louis Robitaille of the Devils, he accepted the embarrassed Albany player's invitation to fight- and fought hard

*Brett Bellemore rounded out the fisticuffs for Charlotte when he fought Chris Murray of Albany on Saturday . Bellemore was also a +1 this week

*Believe it or not, the Checkers are under a curse of the alternate. Charlotte is winless when sporting their alternate black sweaters.

The Checkers continued a marvelous homestand this week. Taking five out of six available points is certainly a great achievement. Holding on for a point against the Devils on Saturday was big, and the win on Sunday was even bigger. The Checkers play Providence well, and if Charlotte can close out the homestand by beating the Devils again on Tuesday night, they will have a good mojo going into the upcoming road swing. Brett Carson and the rest of the defense have been playing great hockey. Carson finding the ability to use his shot as a powerplay quarterback is great, while Jordan's defense has earned him an excellent plus/minus rating this week. FItzgerald has been very physical, the fighters have been unafraid, and Bowman finding goals is a great trend.

The next couple of weeks are not kind to the Checkers. Lots of road games against good opponents, and two sets of back-to back-to back's, are going to challenge this team. This week, the home stand wraps up, with one final match-up against the Devils to close the three game home series against Albany. After that, Charlotte takes to the road for three games this weekend. The rough stretch has the Checkers playing the Binghamton Senators on Friday night, the Adirondack Phantoms on Saturday night, and then the hot Hershey Bears come calling for a five-o' clock match-up on Sunday evening.

Last week, Jeff Daniel's playing career was put under the microscope. If you said that the current Checkers coach was drafted by the Pittsburgh Penguins, you were correct. Daniels was drafted in the 6th round, 109th overall, in the 1986 NHL Entry Draft.

For this week, let's look at the personal life of one of the Checkers who has earned call-ups a couple of times. The young Zac Dalpe has said that his favorite sport other than hockey is... what? 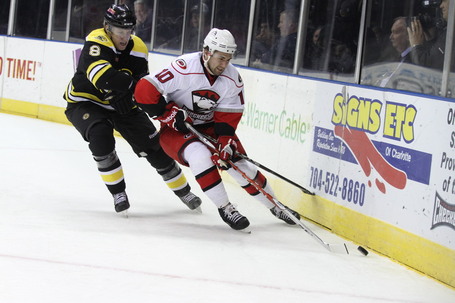 (Jon Matsumoto works with the puck along the boards against Providence, via Gregg Forwerck) 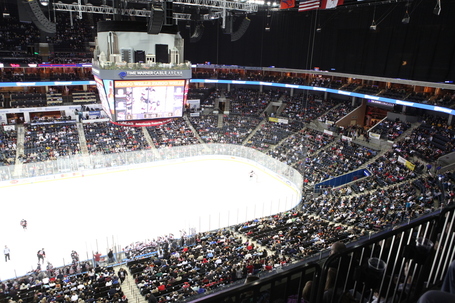 (A zoomed out view of the Checkers home, Time Warner Cable Arena on Saturday night, via Gregg Forwerck) 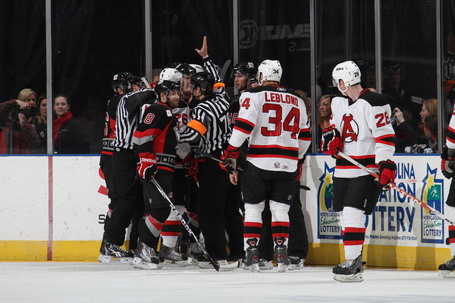 (The Checker's matchups against Albany were very physical and chippy games. Scrums like this one after the whistle were common occurances in the games against the Devils this week, via Gregg Forwerck) 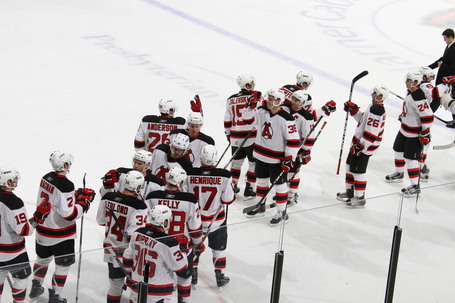 (The bad guys came away victorious on Saturday night in overtime after the tying the game late in the third, via Gregg Forwerck) 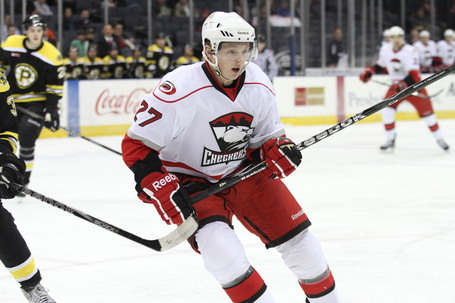 (A good look at the Spokane Chiefs graduate- Drayson Bowman. Bowman has been finding the back of the net consistently of late, and has a couple fighting majors to boot, via Gregg Forwerck)